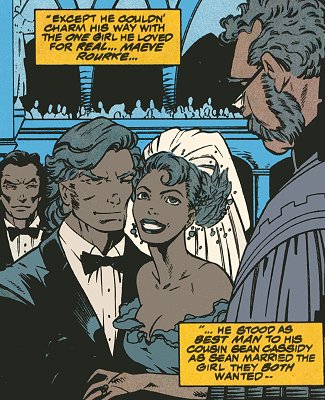 Theresa Rourke Cassidy’s life was already determined to be complicated before her birth. Theresa’s mother – Maeve Rourke – was caught between two men, the Cassidy cousins, Tom and Sean. Eventually, she decided to give her heart to the latter and married Sean. Tom didn’t stop loving her, but stepped graciously aside. [Classic X-Men #16] Sean - a mutant with sonic powers – had his career with Interpol. He was busy on an undercover assignment for months with no contact to his family and so was unaware that Maeve was pregnant and wasn’t around either when she died accidentally in an IRA bombing shortly after giving birth to Theresa. With no means of contacting Sean, Tom took care of the infant, Theresa.

When Sean returned to learn of his wife’s death, he was devastated. Before Tom could even tell him of the existence of his daughter, Sean lashed out at Tom with his sonic scream for not having taken better care of the woman 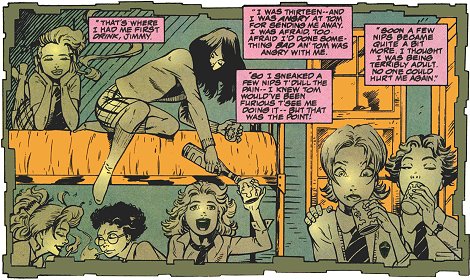 they both loved. While Sean flew away in anger, Tom fell into a chasm, breaking his leg as a result of the attack, which left him with a limp. Angrily, Tom swore to make Sean pay and vowed to never tell him about his daughter, raising her himself instead. Tom raised his niece, Theresa, in Cassidy Keep with the help of the keep’s butler, Eamon, and his family. However, he also began embarking on his career as a criminal and, to keep Theresa from harm, sent her away to a boarding school. Feeling lonely, Theresa began for the first time to experiment with alcohol at the age of thirteen. [X-Force (1st series) #31]

Eventually, her own mutant power – a sonic scream like her father’s – developed. While apparently not enamored of her uncle’s career, she nevertheless helped him and the Juggernaut on a heist as Siryn, putting them up against Spider-Woman and the X-Men. When they were caught, Black Tom relented, told the X-Men of the teenager’s true identity and took all the guilt on himself, not wanting to have his niece go down the same path as he. [Spider-Woman (1st series) #37-38] 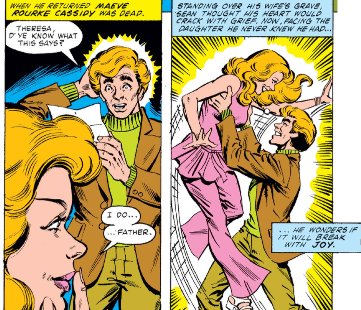 Sean Cassidy aka Banshee being a former member of theirs, the X-Men reunited Terry with her father [Uncanny X-Men (1st series) #148], and she soon went to live with Sean and his lover, Moira MacTaggert, at Moira’s research complex on Muir Isle.

There, she befriended Jamie Madrox, another young mutant who lived there as well and they both became Moira’s lab assistants of sorts. They also accompanied Moira when she traveled to New York to help search for Sunspot and Warlock, two of the New Mutants, who had run away after a misunderstanding.  Only a little older than the New Mutants, Terry and Jamie were thought to be better able to relate to the teenage mutants. Equipped with a portable Cerebro device, they soon found the two runaways in Manhattan, in the care of the Fallen Angels, a semi-criminal group of teenagers (mostly mutants), who were led by the Vanisher. Unable to convince them to come back home, Siryn and Multiple Man had no choice but to hook up with the Fallen Angels too. After some weird adventures, the two New Mutants returned to Xavier’s. Terry and Jamie, on the other hand, decided to stick around with the Angels some more even after, to keep them on the straight and narrow. They had become closer, possibly even lovers. [Fallen Angels #1-8]

What Siryn didn’t know, though, was the fact that she wasn’t together with the real Jamie but one of his duplicates that wanted to have a life of his own. All the time with the Fallen Angels, it was this renegade duplicate of the Multiple Man, whereas the main Jamie was still on Muir Island, awaiting Moira’s and Terry’s return. At the same time, the Shadow King was slowly corrupting the inhabitants of the island and, when the two women did finally come home, they too fell under the evil telepath’s control, just like everyone else. As such, the switch between renegade Jamie and his duplicate wasn’t noticed. 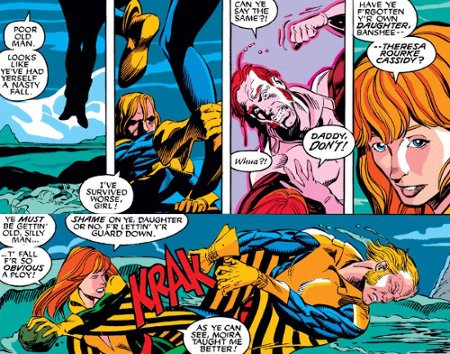 The malevolent telepath was using his powers to bring out the more violent and primal urges of his targets, turning them into "willing" servants against his arch-nemesis, Charles Xavier. Moira established her own set of arena games for the isle's occupants to test themselves against each other in physical combat. A strike force consisting of X-Factor and many other past and present X-Men, including Banshee, finally invaded the island and battled the possessed residents. Theresa even had to fight her own father, until Forge managed to disrupt the Shadow King’s influence. [Uncanny X-Men (1st series) #278-280]

The time being possessed by the Shadow King left Theresa hurt, frustrated and angry – not to mention without a home, as the research station had been pretty much devastated. A few 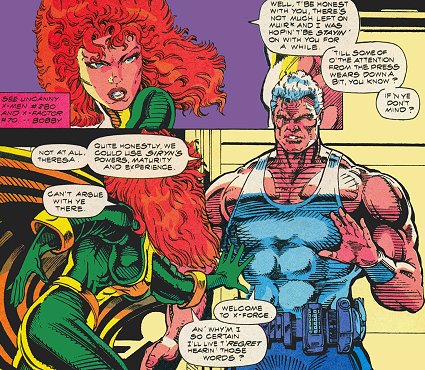 weeks later, when she heard of Black Tom and Juggernaut holding hostages at the World Trade Center, she decided to vent her anger at them and fight them. In Manhattan, she hooked up with X-Force – an equally angry group of young mutants led by Cable, who were also intending to fight the duo, so she fit right in. After the two villains were defeated, Cable offered Theresa to stay with them, [X-Force (1st series) #3, Spider-Man #16, X-Force (1st series) #4-5] and she soon became deputy leader after Cannonball. Siryn quickly became attracted to the fighting machine called Shatterstar, though nothing ever came of it, as he couldn’t care less.

When Cable seemingly was responsible for shooting Professor Xavier, his associates in X-Force were hunted and captured by the other X-teams, 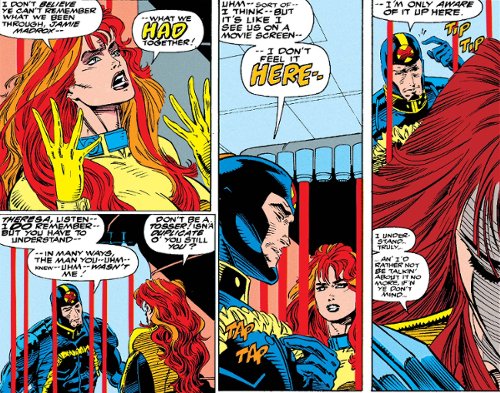 including X-Factor, who now counted the Multiple Man among their ranks. Once X-Force had been detained and locked away in the Danger Room at Xavier’s, Theresa was shocked to learn that Jamie Madrox didn’t remember their past relationship as she did. It was only then that she discovered that the Madrox with whom she had gotten romantically involved had only been a duplicate. [X-Force (1st series) #16-17]

In the aftermath of that crisis, while the X-Men were deciding X-Force’s fate, Siryn and Warpath stole a copy of the X-Men’s files to make sure they could get X-Force up and running again.

Later that day, after Cannonball convinced Xavier to let him continue to lead 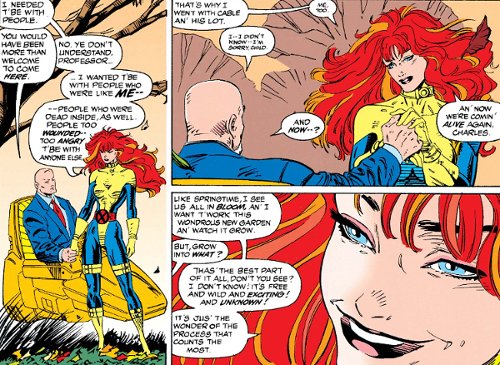 X-Force his own way, the group relocated to Camp Verde. Xavier also had a talk with Theresa about her membership with X-Force. She explained that she’d felt dead inside after what the Shadow King did to them, but now that had changed and her emotions were coming alive again. [X-Force (1st series) #19]