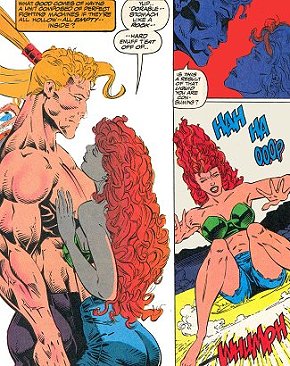 However, that didn’t mean her inner troubles were over. In sharp contrast to her cool head in battle, in her free time, Theresa, full of self-loathing, tended to drink more and more, coming on to people such as Shatterstar and Cable. For as long as he could, Warpath had tried to keep that a secret from the others, while he cared for her, but eventually the others noticed Terry’s drinking problem too. [X-Force (1st series) #26, 29]

Eventually, she finally decided to face her inner demons and returned to Cassidy Keep where she grew up, asking James along. In Ireland, they found the family’s lawyer badly injured by Black Tom, whose powers were spinning out of control. During the first two weeks of their stay, Theresa’s alcohol problem increased, forcing Warpath and a childhood friend of her, reporter Kelvin Doneghann, to work together with the Juggernaut to 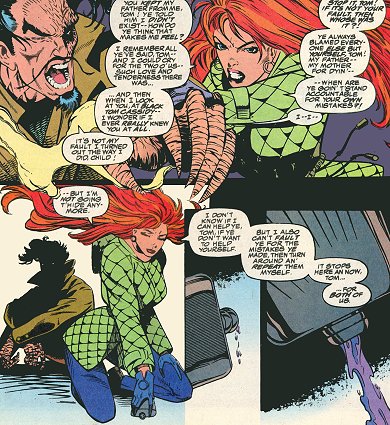 arrange a meeting with Tom. Theresa finally met her uncle over Maeve’s gravesite, where she confronted him about keeping her a secret from her father and told him to stop blaming others for his own mistakes. Realizing that she was at least partially sporting the same attitude, Siryn got a handle on her drinking. Before returning to their teammates in the United States, Terry told James that she could not return his romantic feelings and that she wanted to remain “just friends” with him. [X-Force (1st series) #31]

A little later, she met up with her father who, in the meantime, had become the headmaster of Generation X. Banshee told his daughter he wanted to have a better relationship with her as friends, and she happily accepted. [X-Force (1st series) #35] Shortly thereafter, the two of them tried to track down Black Tom, whose condition was getting worse. In the process, they teamed up with Deadpool, the slightly unhinged merc-with-a-mouth, whom Tom was trying to 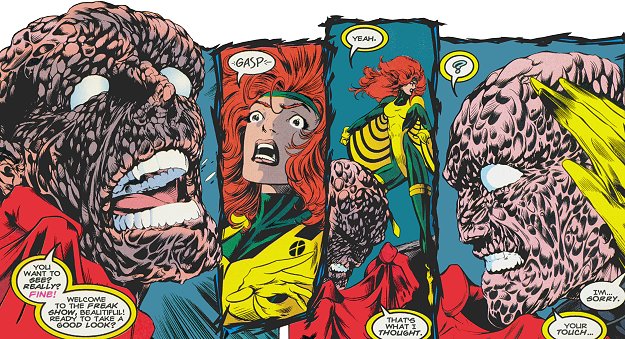 get to gain his healing factor. While fighting traitorous Interpol agents, Tom’s goons and the Juggernaut, Siryn and Deadpool grew closer. By accident, Theresa even happened to see Deadpool’s disfigured face and, though she was disgusted by the sight at first, she still offered him her support and friendship. After Tom was eventually caught again, Deadpool and Siryn promised to help each other out, should the need arise. [Deadpool (1st series) #1-4]

A couple of weeks later, Cable decided to change things for X-Force and have them operate out of the Xavier Institute. With Cannonball being promoted to the X-Men, Siryn was given the 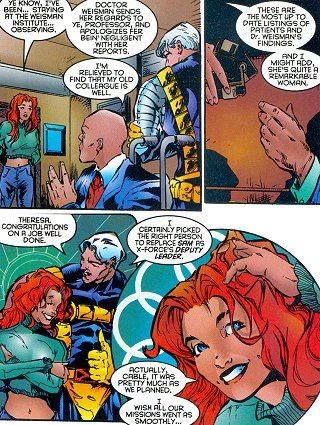 chance to prove herself as sole field leader of X-Force by performing an undercover mission for Xavier. She had to infiltrate the Weisman Institute for the criminally insane, seemingly as a patient, because Miss Weisman had not been returning calling Xavier's calls and Charles was worried about the patients he’d entrusted to her. Unfortunately though, Theresa was caught snooping around and was imprisoned. Rendered powerless by an inhibitor collar and unable to reach X-Force, who were busy at the moment, she managed to contact her “special friend” Deadpool and ask him for help. Once the mercenary busted her out of her holding cell, the unlikely pair confronted Dr. Weisman, only to learn that the doctor herself was under control seemingly by a young inmate named Jeremy Stevens. The telepathic boy made Theresa forget about events (and the fact that Deadpool was still kept at the institute) and she returned home to report that nothing was amiss at the Weisman Institute. [X-Force (1st series) #44-47] 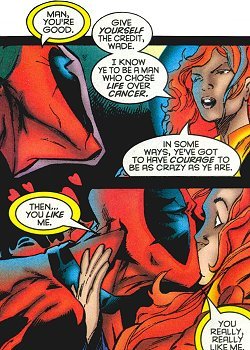 For the next weeks, Theresa found herself having recurring nightmares involving Deadpool, and eventually she fully remembered what happened during a training session with Shatterstar, who wielded similar blades as Deadpool. Without informing Cable or Xavier, as she wondered whether it was them who had messed with her mind, Siryn returned to the Weisman Institute along with Shatterstar. Once there, Theresa found herself joining Deadpool in some telepathic illusionary scenarios, though after facing her inner demons she recognized that the true culprit was the omnipath called the Gamesmaster. For reasons his owns, the Gamesmaster decided to let them go, causing Terry to wonder if he had wanted them to come there the whole time (which he did as he had troubling revelations for Shatterstar). After some encouraging words to Wade and a kiss, Siryn and Deadpool parted ways, each of them returning to their own lives. [X-Force (1st series) #51, 56]

Around the same time, Warpath had become involved with the exotic Risque. During her entire time in X-Force, Theresa always kept her teammate at arm’s length, not wanting to be more than friends. However, she was very uncomfortable now that he apparently moved on and seemed to start something new with another girl. In front of herself, Theresa had to admit that she was feeling jealous, even though she had no right to be. At least, Siryn’s suspicions about Risque turned out to be justified, for she later betrayed Warpath and turned him over to an employer of hers. [X-Force (1st series) #55, 57, 59, 65]

X-Force continued to operate out of Xavier’s mansion until Operation: Zero Tolerance began, and Bastion and his Prime Sentinels got a hold of the Xavier Institute and all of the professor's files. Cable ordered the team to go underground under assumed names, but they refused to hide their heads in the sand, so he left the team to make their own choices. Many members went their own separate ways, but Theresa stayed with the largest grouping afterwards (Warpath, Meltdown, Moonstar and Sunspot), and these five decided to go on a road trip. Siryn was somewhat annoyed with new/old arrival Dani Moonstar, as several of the older teammembers automatically deferred to her in questions of leadership. [X-Force (1st series) #70-71]

When James was haunted by nightmares about the death of his family and friends, Terry returned to the Camp Verde reservation with him to find out who was responsible for the murder of his people. Following a new lead, they uncovered that the massacre at Camp Verde was nothing else but a cover-up of some psychotic doctor having run medical experiments on the residents of the reservation. In the heat of the battle and due to amphetamines given to him, James’s heart gave out. While Theresa ran CPR on him, the rest of X-Force followed James to the afterlife to recover his soul. [X-Force (1st series) #72-74] This adventure seemed to clear the air between James and Theresa, as from then on they both seemed comfortable with each other as best friends, without any unresolved romantic tension.

After their teammate, Sunspot, got his assets unfrozen, X-Force ended their time on the road and permanently took up residence at a warehouse in San Francisco, California. Several old 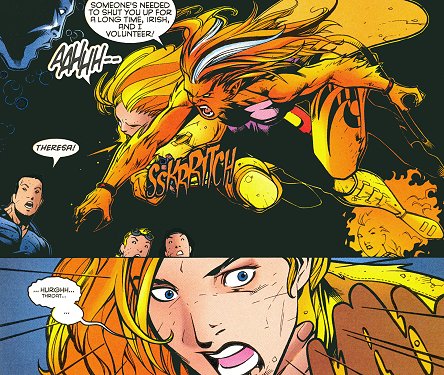 members  returned to the fold, but they also had to face one former teammate opposing them, as Feral had joined the new Hellions. Their leader, King Bedlam, had a plan to use a mutant known as the Armageddon Man to blackmail the US government for a large sum of money. X-Force successfully routed the Hellions and got the Armageddon Man back into stasis, but not before Feral lashed out at Siryn, severing her vocal chords with her sharp claws. While she was rushed to a hospital, the doctors could do nothing but stop the bleeding and confront Theresa with the fact that the damage might be permanent, leaving her unable to speak or use her powers. [X-Force (1st series) #87-90] 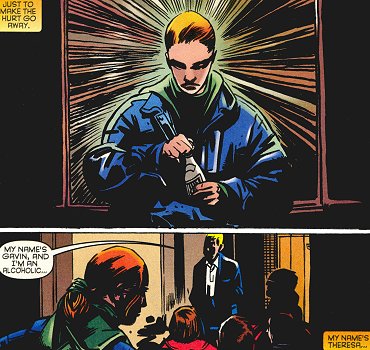 Theresa was depressed, even considering suicide. She withdrew from her friends and teammates and nearly started drinking again but instead went to an AA meeting to get her act together. Afterwards, she chose to leave X-Force. She gave Warpath a letter in which she explained her decision and went to visit a distant aunt, who had invited her to her ranch in Looking Glass, California. [X-Force (1st series) #91]

While getting to know her aunt better and waiting for her vocal chords to heal, Theresa felt compelled to visit an antique store.  The shop owner noticed the scars on her neck and insisted on Theresa trying on a necklace with a jewel pendant to cover them. The piece of jewelry had been salvaged from a passenger liner that 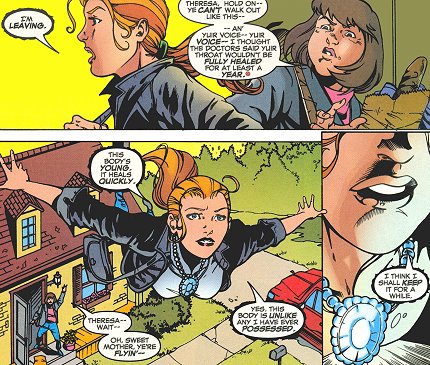 sunk off the coast of North Africa during the war. Before Terry knew what was happening, the necklace took possession of her. Whatever spirit or entity the necklace was housing, it made Terry drink alcohol, much to the concern of her aunt. There wasn’t much she could do about it, though, as the necklace also was capable of accessing Siryn’s powers, and made her fly away from Looking Glass to whereabouts unknown. [X-Force (1st series) #99-100]

It is unclear what happened afterwards, but eventually Siryn got rid of the necklace and the entity it housed. As a result, she also lost her voice again, but not for long. Some time later, 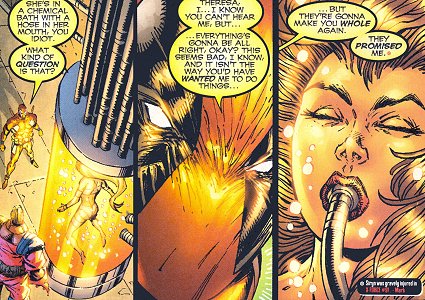 Deadpool arranged for Theresa’s powers to be restored. He took a commission by a  mysterious organization called the Watchtower to kidnap Wolverine in exchange for their restoring Siryn’s power, which they did. Ironically they cured her with a serum derived from the X-Man’s healing factor. While she disagreed with his methods, Theresa thanked Deadpool for his help and, as Wolverine managed to break free on his own, she didn’t give it much thought afterwards. [Wolverine (2nd series) #154-155]

After her father Banshee created a disaster with his paramilitary organization, X-Corps, Theresa joined Xavier’s outreach program X-Corporation Europe that replaced it. Multiple Man was also part of the new group and, while his reason for joining was to atone for his own involvement in the X-Corps debacle, Theresa hoped to make up for her father’s actions. Soon, the team found itself in the fight of their lives in the Channel Tunnel against the horrifying Weapon XII. Several bystanders, as well as X-Corporation member Darkstar, died during that fight. [New X-Men (1st series) #128-130]