In the reality shown in What if (2nd series) #85, Xavier and Magneto set their differences aside peacefully, and Avalon was left undisturbed in Earth’s orbit. However, Magneto’s dream of a peaceful haven for mutants did not come true, for no more than ten years later, his Acolytes were at each other’s throats. Some of them wanted to move Avalon to another galaxy,  thinking 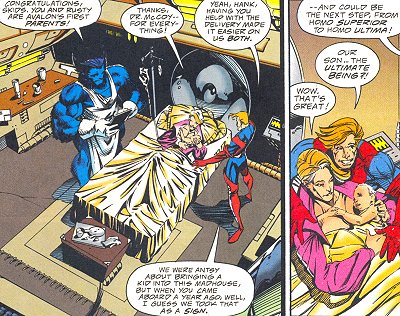 that they were still to close to humanity’s influence, whereas the others believed that they should kill humanity and conquer Earth for themselves. Rusty and Skids stayed away from either side and the constant fights, them being busier with themselves, as they were expecting a child. Hank McCoy helped to deliver Avalon’s first baby, and examining the boy, he found something special in his genetic make-up. Apparently the son of Sally and Rusty, Sean Collins, was the next step in human evolution – Homo ultima – capable of choosing and alter his mutation at maturity. As the word spread, the different Acolyte factions put their differences aside, and feeling threatened by the arrival of a new race, they teamed up to attract Rusty and Skids and kill their baby. With Sean dead, Sally and Rusty turned their back on the Acolytes and returned to Earth. The sad part was that actually the boy was a normal mutant; Magneto had faked the test results, well aware that his Acolytes needed a common enemy to unite against.

Like many other mutants not deemed worthy enough to serve Apocalypse, Skids' counterpart of the Age of Apocalypse was an inmate of Sinister's breeding pens, held like a caged animal. After Magneto's X-Men ended Apocalypse's rule,  Skids and many other Morlocks returned to the 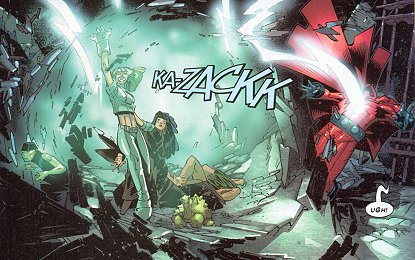 tunnels underneath New York's sewers. They didn't trust any outsiders, not even the X-Men when they ventured into Morlock territory, inviting them to come and live with them in the surface world. This version of Skids also had mastered her powers to such a point that she could shield herself and several others from Storm’s lightning bolts.