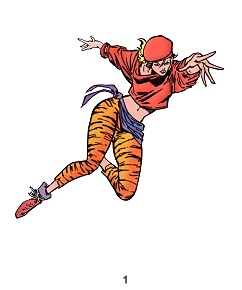 2) Sally found herself with no costume when she and the other X-Terminators fled their boarding school in the middle of the night, so they all donned new outfit. This time, Sally wore what would become her most well known outfit, a yellow one-piece spandex body suit, with a small blue jacket, blue sash and blue shoes. By this time she had also let her hair grow long, though by the time she was a brainwashed member of the M.LF. it was short again. [X-Terminators #2]

-) During her time with the Acolytes, Skids was one of the group‘s few members not to wear their standard red and blue costumes, but kept her yellow and blue outfit. 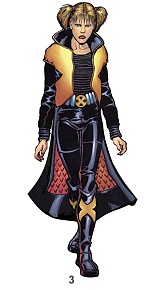 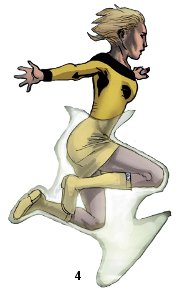 3) Upon joining the X-Corporation, Sally wore the standard black and yellow leather costume, hers consisting of the generic pants and stripped top, but she also wore a long matching coat. During that time, she wore her hair in pig tails. [X-Treme X-Men (1st series) #42]

4) Undercover for S.H.I.E.L.D., Sally infiltrated the Morlocks in a similar spandex outfit that she wore while with The 198, however this one was a yellow dress, with a black band at the neckline and around the wrists. Sally wears matching boots. [Uncanny X-Men (1st series) #487]