The old and new teams of X-Men together defeated Krakoa. As part of the X-Men, Ororo received the codename “Storm” and a costume made of unstable molecules. It also contained some of her own elements, like her tribal tiara and her mother’s ruby, which she wore as a brooch that held the cape together. [Giant-Size X-Men #1]

Ororo was naïve in the ways of the modern world. For example, she had no idea why there was any need for clothing, if one didn’t feel cold. This led to some embarrassing episodes with her fellow X-Men. Otherwise, she quickly made friends among the others, regarding them as family. She very quickly forged a bond of friendship with Jean Grey, who helped Ororo buy a new wardrobe. It was during one of their shopping tours that Jean learned of Storm’s severe claustrophobia when the two women were chasing a thief into a subway station. [Classic X-Men #2, 4] 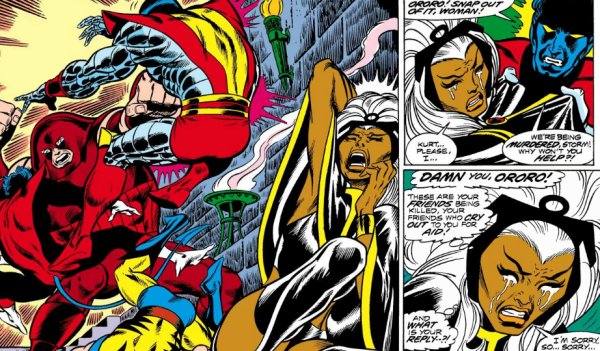 During the X-Men’s adventures in the Savage Land, Ororo was at one point unable to save the villain Garokk’s life, who was falling into a dark pit. She flew down after him but, shortly before she had reached him, she was overcome by her claustrophobia and rushed back to the surface. [X-Men (1st series) #116] Feeling the need to sort this out alone, she distanced herself 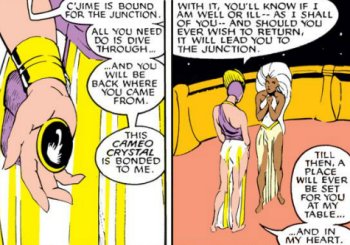 from the other X-Men and wandered around the Savage Land on her own. Bathing in a lake, she suddenly encountered a strange beast and saved a mysterious woman from it, almost losing her own life in the process. When Ororo came around, she found herself in another fantastic dimension adjacent to the Savage Land. M’rin, the woman from the lake, was this dimension’s warrior queen. She befriended Ororo and came to regard her as her surrogate daughter (her true daughter being her mortal enemy). However, after a while, Ororo felt she had to leave her and return to the X-Men. Before Storm left, M’rin showed her how to use her mother’s ruby crystal to open the dimensional gates and come visit her, if she wished. [Classic X-Men #22] 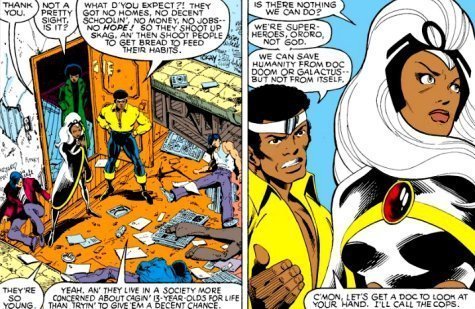 Ororo started to doubt her life as an X-Man. At least in Kenya she could help people. Here, she only seemed to fight. Sometime later, she was kidnapped by Arkon, emperor of the other-dimensional world Polemachus. His people needed someone with control over lightning to restore the machine that kept the energy-rings around their world (in place of a sun) and, since Thor wasn’t available, they abducted Storm. Ororo was willing to help, even though it would have cost her life. However, with the aid of the other X-Men, any loss of life was avoided. This adventure reminded her that life as an X-Man was more than just one battle after the next. [X-Men (1st series) Annual #3]

When a new student, the teenager Kitty Pryde, was detected by Cerebro, Professor Xavier brought Ororo and the others to meet the prospective student. Ororo quickly started to develop motherly feelings towards the girl, whose parents’ marriage was disintegrating. During the same adventure where the X-Men met Kitty, Storm was captured and humiliated by the telepathic 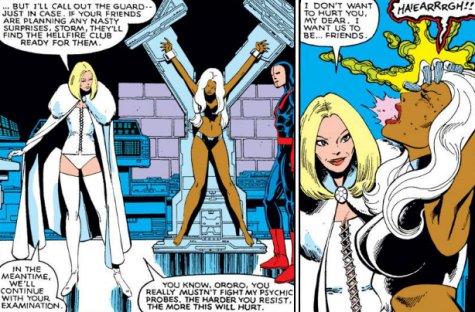 White Queen, who telepathically probed Ororo for information on the X-Men. When the rest of the team assaulted the building, the White Queen got angry and would have left Storm a brainless vegetable, if not for the intervention of Jean Grey, now known as the Phoenix. This would be the first of many poor encounters between Ororo and Emma. [X-Men (1st series) #129-131] 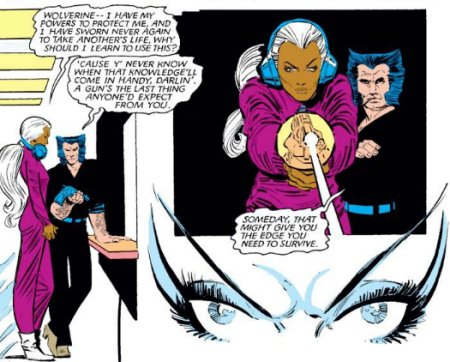 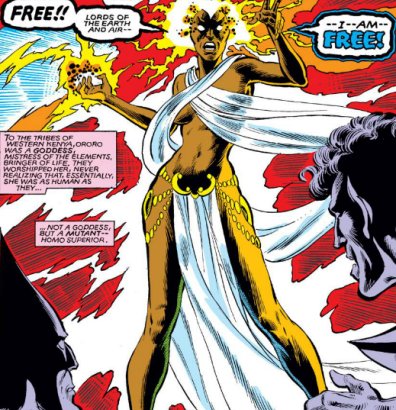 During a walk in Salem Center, Storm was almost assassinated by a South-African sniper, part of de Ruyter’s revenge plot for her saving T’Challa as a teenager. She reached out to T'Challa, now both king of Wakanda and serving the Avengers as the Black Panther. Solving the case, the Black Panther and Ororo renewed their friendship but both realized far too much had changed since they were children to try and renew their relationship now. [Marvel Team-Up (1st series) #100]