When Kitty’s parents demanded that Kitty be transferred to the Massachusetts Academy (of the White Queen), Storm brought her there and became the victim of the Hellfire Club’s latest plot. To infiltrate the X-Men, the White Queen used a device to switch bodies with Storm. Ororo had a hard time dealing with her new telepathic powers but eventually did by remembering her friendship with Jean Grey, who had explained to her a few things about mental powers. After freeing herself, it took Ororo some time to convince Kitty that it was really Storm stuck inside Emma Frost’s 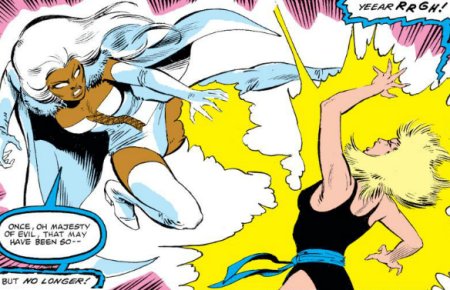 body.  Eventually, they came through and saved the X-Men. With their personalities restored again and Frost about to attack once more, Storm was overcome by a murderous rage and quite willing to break her vow not to kill. It was Wolverine, of all people, who held her back and reminded her that she was better than that. [Uncanny X-Men (1st series) #151-152]

A short time later, the X-Men journeyed back to Polemachus to save both Arkon and the Fantastic Four from an invasion of the alien Badoon. Arkon and Storm admitted that they had feelings for each other but Storm also told him that, so far, no one had touched her heart the same way Scott and Jean had been in love and that her duty as team-leader took precedence. [Uncanny X-Men Annual (1st series) #5] 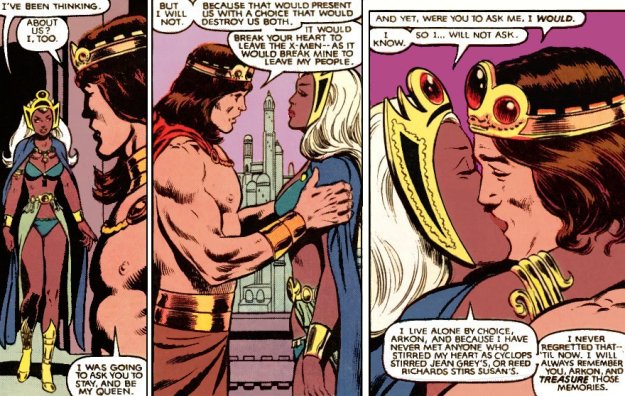 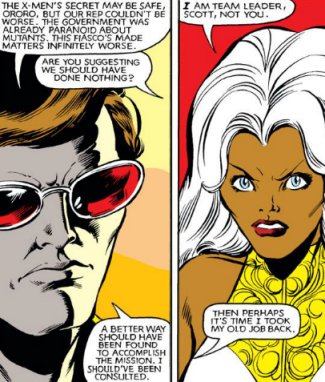 As a leader, Storm was forced to be a great deal more unscrupulous, for instance, when she and the X-Men infiltrated the Pentagon to destroy all the government’s files on the X-Men (as the anti-mutant climate was growing), a plan which unfortunately led to a fight with Rogue within the Pentagon. The X-Men introduced a computer virus in the government systems that automatically edited out any reference to the X-Men or their identities.

As a result of the demands of leadership, Storm wrestled not only with her own doubts but also with those of Cyclops, who had returned from his leave of absence and was unsure whether he should take his old position back. [Uncanny X-Men (1st series) #158, 161] 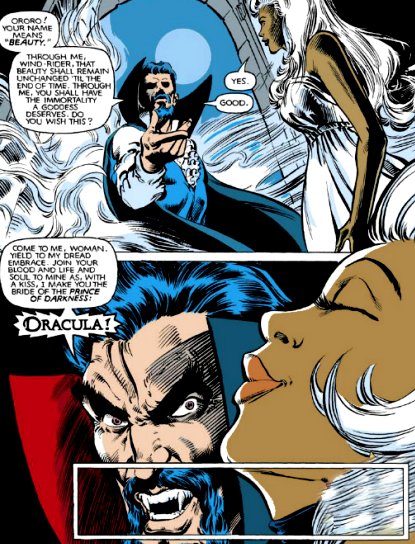 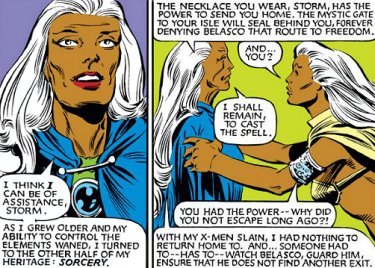 When the X-Men were abducted into space by the Brood, Ororo took it harder than the others. Unlike during other space adventures of the X-Men, she felt that the special link she shared with 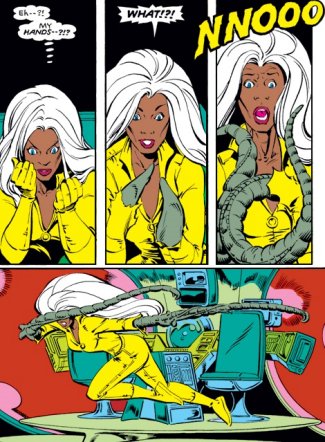 Earth’s lifeforce had been severed and she had no idea why. When the X-Men battled some of the alien Brood, Storm released lightning to stun them but it flared out of control, destroying the enemies’ ship and killing them. Having broken her vow not to kill, Storm was frightened and ashamed at the same time. She examined herself, body and soul, and finally found the reason for her condition – within her resided a child, an alien child. She and the other X-Men had been infected with Brood embryos. Learning this, Ororo was in turmoil and fled from her friends in a small spaceship. She felt she couldn’t take a life, even one as evil as the Brood in her, but how could she unleash such an evil on the world? Just as her body starting to undergo its transformation, she took a third way out, effectively trying to commit suicide, as she channeled the energy of all the stars around her into herself, destroying the Brood embryo but leaving her unprotected in the vacuum of space.

Ororo would have died, had she not been saved by the Acanti, a race of space whales that was hunted by the Brood, who liked to use them as living spaceships. An agreement was reached, as the young Acanti prophet singer, who carries the soul of his entire race, had lost his mother to the Brood and needed an adult mind to guide him. In return, for becoming one with the Acanti, Storm’s physical body was healed inside the alien whale, while her consciousness guided him and as an astral image could also interact with the X-Men. Eventually, with the homeworld of the Brood destroyed and the X-Men miraculously healed by the Acanti, Ororo was restored and returned to them. [Uncanny X-Men (1st series) #162-166]

Further emotional changes were to come when, shortly afterwards, the X-Men confronted the Morlocks – a clandestine society of mutants that lived beneath New York – over the kidnapping of former X-Man Angel. With the X-Men hopelessly outnumbered, Storm saw only one chance to save her friends. She challenged the tough Morlock leader Callisto to a duel and surprisingly won by ruthlessly and intentionally almost killing Callisto, something she would never have done in the

past. As a result, she also inherited the leadership of the Morlocks and, before she and her team left, she forbade any more attacks on the humans living on the surface. [Uncanny X-Men (1st series) #169-170]

When the X-Men were in Japan for Wolverine’s planned wedding, Storm ran into and fought side by side with a friend of Wolverine’s: Yukio, a self-proclaimed ronin (a rogue masterless Samurai) who lived life to the fullest every day, as though it were her last. Storm found herself fascinated with the woman and her lifestyle and Yukio’s influence was the final straw that caused a visible change in Ororo. When Storm returned to the X-Men a few days later, she had gone punk, was dressed in leather, more willing to use violent means against her foes, if necessary, and no longer interested in keeping her emotions in check. [Uncanny X-Men (1st series) #172-173]

The change puzzled her team-mates and especially hurt her relationship with Kitty. The young girl had a negative attitude towards change after her parents' crumbling marriage and eventual divorce. Kitty and Storm talked and Ororo explained that she was Kitty’s friend, not her surrogate mother. Kitty didn’t have the right to expect her to stay the same just for her own benefit. [Uncanny X-Men (1st series) #180]