Sunfire sought refuge in an abandoned ancient monastery in Japan’s Quonon province, where he wanted to wait for his death, but his return was recognized by a young boy, Hiro Takachiho, with a genius-level intellect. Hiro idolized Sunfire, and he had built special equipment to scan for his favorite super-hero’s energy signature. Once he tracked him to the monastery, Hiro was shocked to see Sunfire in his deteriorating condition. Their meeting was interrupted by the Silver Samurai and several other super-powered individuals, who wanted to recruit both Hiro and Sunfire for Japan’s own super-hero team. The Samurai informed Shiro that, during his absence, the government’s attitude had changed and, instead of locking him up, they wanted him to participate in their official super-team – Big Hero 6. As such, the leading scientists of Japan were assembled to see if they could make some progress where Canada’s Department H had failed.

While Sunfire was in a hospital, due to a spell of weakness that followed the doctors’ examinations, the rest of Big Hero 6 found themselves on their first mission against a foe called the Everwraith. The ethereal being was under the misconception that, in order to become a 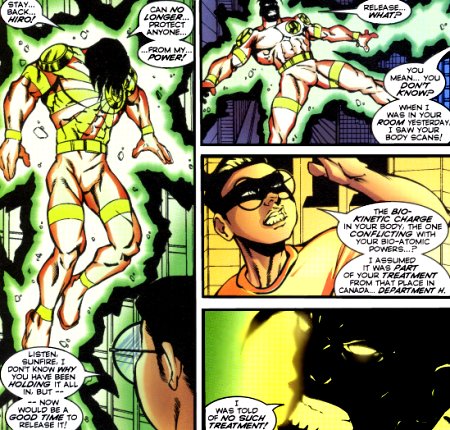 stronger nation, Japan had to cull the weak from its people.  As none of his teammates were able to harm the Everwraith, Sunfire came to aid them, only to become the unwilling instrument of the villain. Somehow possessed by the Everwraith, Shiro tried to hold back his flame powers that were being siphoned from him, but it was clear that he could only delay the Everwraith’s efforts to turn Tokyo into ashes. It was right then that young Hiro uncovered the truth of what had been done to Sunfire by Dr. Huxley, namely he had been injected the mysterious Zero Fluid (that also gave the Jack of Hearts his powers). This fluid created a bio-kinetic charge in Sunfire’s body that conflicted with his flame powers. Releasing this charge, Shiro could break free from the Everwraith’s hold, and he also dispersed the energies the villain had already gathered. [Sunfire & Big Hero Six #1-3]

Following that incident, Sunfire angrily returned to Canada to demand answers from Dr. Huxley why he had been lying to him the whole time. In the meantime, Alpha Flight had uncovered his dark experiments and Dr. Huxley had fled. This turn of events only increased Shiro’s anger but, before he could sort things out with the Canadians, he was called back to Japan to aid Big Hero 6 in an emergency. Alpha Flight accompanied him, showing their good intentions and that they really had nothing to do with whatever Huxley had been up to. Once the crisis had been dealt with, the two teams parted on good terms. [Alpha Flight (2nd series) #17]

Sunfire remained with Big Hero 6 until a procedure was found to remove the Zero Fluid from his system. He was then reassigned to working with the Yakiba, literally the “cutting edge” of Japan’s military.  Shiro’s first mission as a super-powered field agent involved a shapeshifter that infiltrated 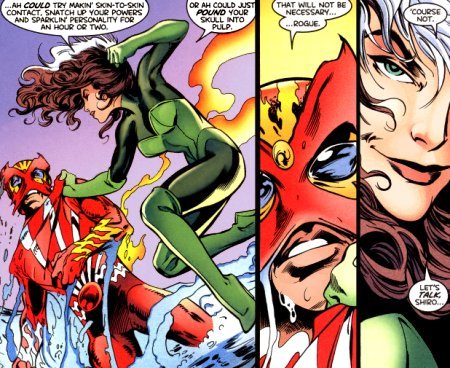 some of Japan’s top secret facilities and murdered several agents on their trail. All clues pointed towards Mystique, but when Sunfire trashed her apartment at Brooklyn Heights, he found Rogue instead. Believing her to be Mystique in disguise, Sunfire duked it out with Rogue until she could convince him that she was the real deal. Together, they uncovered evidence that proved Mystique innocent; she had been framed by some other shapeshifters. When the two X-Men hunted them down, strangely these shapeshifters’ followers only fired their weapons on Rogue, trying not to hurt Sunfire. [X-Men (2nd series) #93-94] 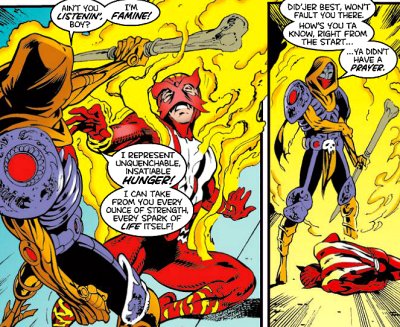 It was eventually discovered that these shapeshifters were Skrulls, working for Apocalypse, and as Sunfire was one of the legendary Twelve, they had strict orders not to harm him. When the X-Men found a list of the Twelve’s names, including Shiro’s, they attempted to contact all of these mutants. Unfortunately, before Sunfire could convince his superiors to further investigate the Skrull plot, he was kidnapped by Apocalypse’s Horseman, Famine. One by one, the Twelve were captured, and it turned out that Apocalypse himself wanted to combine their energies to gain omnipotent power. Together with Storm and Iceman, Sunfire represented the extreme forces of nature in Apocalypse’s plan. Eventually, though, the Twelve broke free from the power siphoning device they were strapped to and, with Apocalypse defeated, Sunfire returned home to Japan. [Gathering of the Twelve crossover] 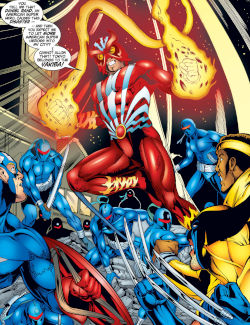 Several months later, the Yakiba were alerted to the mystical city of K’un-Lun appearing amidst of Tokyo, a great barrier separating it from the modern buildings around it. At first, Sunfire was willing to work together with several heroes who had gathered - Captain America, Wolverine, Luke Cage, Psylocke and Iron Man. Upon learning that K’un-Lun’s appearance had been caused by Iron Fist, another American superhero, they lost his trust and Sunfire asked them to leave Japan. The fact that Iron Fist had been kidnapped, and the magical ritual to summon the city had been performed against his will didn’t matter to Shiro. Naturally, the heroes didn’t follow Sunfire’s orders and entered K’un-Lun by force, while Captain America and a group of S.H.I.E.L.D. agents kept Sunfire and his Yakiba busy. Before long, Captain America convinced Sunfire that they were all fighting on the same side, and they joined the other heroes in their final battle against the real villains. [Iron Fist/Wolverine #2-4] 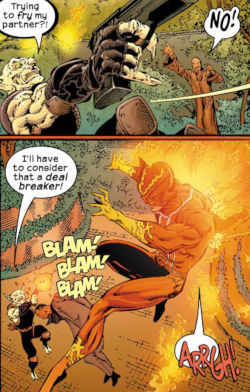 A few weeks later, Shiro was taking some downtime in one of the family’s estates in Kobe when he was approached by Sabretooth and Wild Child. The pair had been sent on a recruitment drive by the new Director of the Weapon X Program, and they gave Sunfire a rather simple choice – join or die. Never one to let himself be bossed around, Shiro angrily lashed out with his flame powers and scorched Sabretooth’s entire body. However, Wild Child shot him with a gun before he would share his teammate’s fate. Sunfire was hit by three bullets and crashed out of the sky. Thinking him dead, Sabretooth and Wild Child left him lifeless on the ground – their mission apparently accomplished. [Weapon X - The Draft: Wild Child]

After recovering from his injuries, Sunfire joined Xavier’s extended family in the form of X-Corporation Mumbai. It was probably his near-death experience that caused Sunfire to re-think his attitude towards working as part of a superhero team. The X-Corporation was a multi-national effort and Sunfire found himself working alongside many unfamiliar faces as X-Corp sought to extend Xavier's mission to foster peaceful coexistence and safeguard mutant rights around the world. [New X-Men (1st series) #133]

The X-Corporation’s loose organization allowed Shiro to continue his work for the Japanese government. Sunfire was given full authority to enforce a new Japanese law forbidding any outlaw mutants from entering the country. All incoming visitors had to first be identified and approved by the government. This led to a brief conflict with his old teammate Storm who had entered Japan's airspace. [X-Men Unlimited (1st series) #39]

Sunfire also sought to protect his country from other threats that 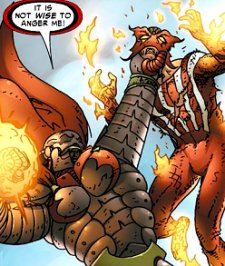 arose, such as the Ultra-Skrull warrior named Titannus.  Sunfire detected Titannus’s crashed ship on the outskirts of Tokyo, and flew to investigate. When the invader refused to leave and proved violent, Sunfire turned his atomic flame against Titannus. He fought bravely, but even the power of the sun itself proved no match for the Skrull. Their second bout alongside the Japanese military was no more successful than the first. Large areas of Tokyo were destroyed in the conflict, and Sunfire was too badly injured to join Doctor Strange and a team of American heroes when they arrived and finally brought Titannus’ threat to a conclusion. [Marvel Team-Up (3rd series) #4-9]