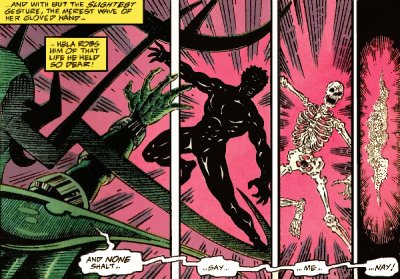 Out of all of the New Mutants teammates, Sunspot was usually the most eager to remain in the foreign lands and alternate timelines they visited. In the reality examined in What If..? (2nd series) #12, Sunspot and the New Mutants chose to remain in Asgard after their first visit to the Norse realm. Sunspot retained his proud membership in the Warriors Three, Asgard’s premier trio of defenders. During a battle in which Hela, the Norse Goddess of Death, tried to take Storm’s soul, Sunspot intervened to save her. Hela disintegrated him with a mere wave of her hand.

Sunspot was a Chief Arbitrator of a dystopian future depicted in New Mutants (1st series) #49 in which mutants were the ruling class and humans lived in urban squalor. Although supposedly a free society, mutant police seized mutant children they detected in the “sub-human” slums and took them up to mutant society for training and indoctrination. Those who dissented had their minds forcibly altered by telepathic mutants. In this reality, Roberto employed Magma as his personal assistant. 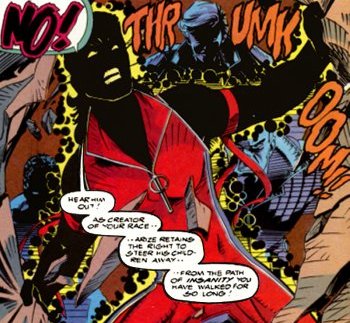 In the potential future depicted in the Shattershot crossover, Sunspot was a member of an X-Force team led by Cannonball, who assumed leadership after Cable died. Roberto was not a member of the team when they first traveled to Mojoworld and helped to overthrow the latest spin-off of Mojo and install their teammate Shatterstar as leader of the Mojoverse. Despite this, Sunspot was willing to help when the team's former ally Arize informed them that Shatterstar had been corrupted by his power and had to be stopped. Roberto and X-Force helped Arize to form a rebellion and overthrow Shatterstar's tyrannical rule. 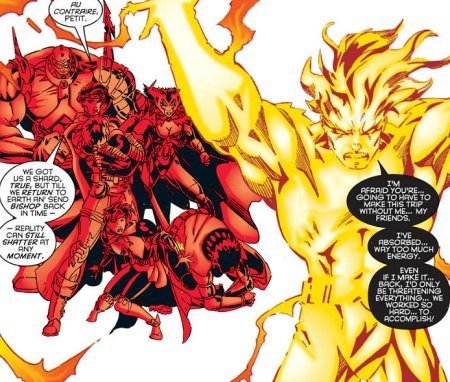 When Legion traveled back in time and accidentally killed his father, Charles Xavier, he removed the only obstacle blocking Apocalypse’s ascendance into global supremacy and inadvertently ushered in the Age of Apocalypse. In this twisted reality, Sunspot—looking very much like his genetic counterpart Reignfire—worked with the thief Gambit as a member of his X-Ternals. After Magneto tasked these noble bandits with retrieving a piece of the M’Kraan Crystal in order to restore reality, they traveled to the Shi’ar Galaxy, where Sunspot began absorbing radiation from the M’Kraan Crystal in lieu of solar radiation. Although he grew intensely powerful from this energy, it soon overwhelmed him, as he had to keep absorbing it to save his teammates. Sunspot sacrificed his life absorbing a lethal dose of this radiation while his teammates accomplished their mission and fled back home—saving not just their world, but all realities in the process. 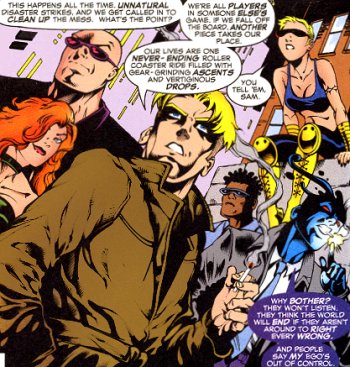 In X-Force (1st series) #100, when the reality-altering Queen of the Star Swords constructed a cathedral that served as a nexus for all realities, the members of X-Force became lost inside of its nebulous, cosmic interior. While there, they encountered several alternate versions of themselves and their team. Sunspot served on at least three of these teams: one in which Cable and Cannonball had died early in X-Force’s existence and were replaced by Deadpool and Copycat, one in which Belasco had overtaken Earth and cornered the remaining X-Men—Cannonball, Karma, Sunspot, Magik, Wolfsbane and Warlock—in a hellish version of Westchester, and one in which the Queen’s pervasive power drove a team of X-Force to embrace nihilism and cynicism. This team agreed to stay out of the Queen’s way if she left them alone. The Sunspot of this latter reality chain-smoked, wore a suit and trench-coat, and was as pessimistic about the state of the world as he was arrogant. 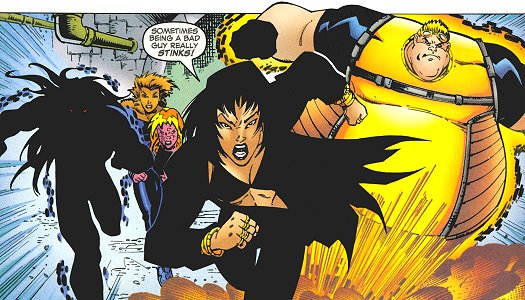 In the reality depicted in Mutant X, Sunspot was a member of a group of thieves called the Marauders. They were nowhere near as menacing as their Earth-616 counterpart, however, as they not only failed to massacre any mutants, but they also failed in the relatively simple task of retrieving a casket for their boss.

Twenty-nine years in the future, in the dystopian reality depicted in Days of Future Now, Sunspot was a member of Gene Nation, a mutant terrorist group. Weapon X and the Sentinels slaughtered the X-Men many times over in this future, significantly reducing the pool of remaining mutants. Sunspot’s Gene Nation cohorts included Frenzy, Beak and Penance, and they often came into conflict with Wolverine’s squad. After Magneto re-emerged and led mutantkind, Sunspot joined with his new team, although it is unclear how long he stayed with this new group, as he was not present during their final stand against the Sentinels. 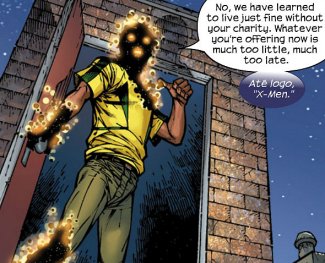 The Roberto DaCosta of the Ultimate Universe was a poor mutant living in Harlem. He resented the X-Men for being elitists and sardonically referred to him and his unaffiliated mutant brethren as “second-class muties.” After forming a neighborhood watch to protect his neighborhood from a serial killer targeting mutants, Roberto drew the attention of Emma Frost, who invited him to attend her Academy of Tomorrow. While there, Roberto adopted the codename Sunspot, fell into cahoots with Sam Guthrie and Alex Summers, and came into conflict with the X-Men on at least one occasion. When a vengeful Magneto masterminded an attack on the Academy of Tomorrow, however, Sunspot numbered among the slain.

In X-Force: Shatterstar, when Spiral escaped to an alternate universe bearing a weapon of limitless power, she began a crusade of dominating that reality’s Earth and slaughtering all who opposed her. After a three-year massacre, all who remained in opposition were Cable, Sunspot 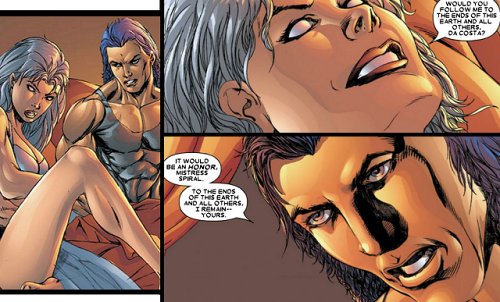 and a few other members of X-Force. Following Cable’s orders, Sunspot seemingly joined with Spiral and became her personal consort until the time came to make his move. He endured six months of sexual servitude before he finally acted against his mistress, at which point Spiral revealed that she knew he was faking it all along; she had just wanted to have some fun before his inevitable betrayal. Although Sunspot eventually broke free and joined X-Force and Shatterstar of Earth-616 in overthrowing Spiral, he had to live with the memories of the horrible sexual deeds he performed, which he feared would drive a wedge between him and his girlfriend, Meltdown. 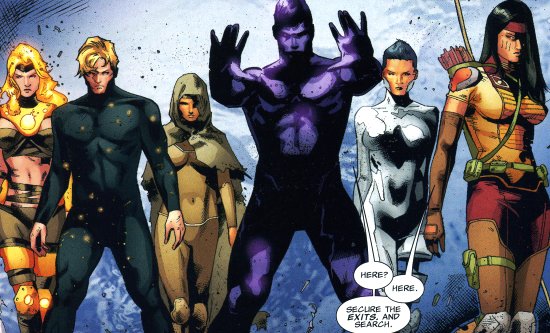 In the distorted reality of Legion's Age of X, Roberto was one of the last remnants of mutantkind who had retreated to Fortress X and fought a constant war to defend themselves from humanity. 'Berto used the codename Eclipse and served Magneto as part of Moonstar's strike force.