2) Sunspot’s second costume—his graduation costume, which he adopted prematurely—was a white, sleeveless leotard with a V-shaped opening on the front that extended all the way down to his belt. This costume also had white pants and bulky, golden cuffs around the wrists and ankles. Sunspot wore a red belt with a large red “X” on the front. The crowning piece, of course, was the mask that covered his eyes and wrapped around his head. [Uncanny X-Men Annual (1st series) #10, New Mutants Annual #3]

3) After Cypher’s death, Sunspot adopted a new costume. This one mimicked the cut of his Graduation Costume, but boasted a different color scheme. While mostly black, the outfit had red and yellow borders, red gloves and red boots. Sunspot also changed to color of his mask from pink to red. [New Mutants (1st series) #61]

4) Sunspot designed a new costume for himself after Cable took over leadership of the New Mutants. This new outfit featured a red mask over the eyes with long tails that hung off the back of his head, a broad-shouldered red jacket bearing a white encircled “X” over the left breast, white gloves, white pants with black and white stripes on the outer leg and heavy-duty, calf-length grey boots. [New Mutants (1st series) #90] 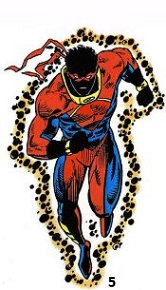 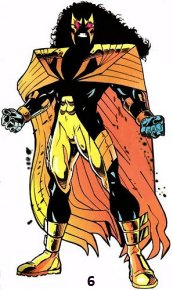 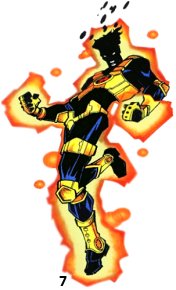 5) After losing Cable, Sunspot and X-Force created new costumes for themselves using the clothes-making machine the X-Men got from the Shi’ar. Sunspot’s costume played on the design of original X-Men and New Mutants costume. The fabric covering his arms and legs was dark blue, while the material for the torso, outer arms and interior of the legs was classic X-Men yellow. This costume also featured an inverted chevron across the abdomen, an enlarged yellow collar around the neck with a red “X” embroidered over the throat and a red mask over his eyes with long tails in the back. One variation of this costume he wore had red material in place of yellow, except for his collar, which retained the classic color. [X-Force (1st series) #19]

6) While believing himself to be Reignfire, Sunspot adopted the villain’s costume in its entirety. His outfit was as black as his solar-powered skin, and he adorned it with golden armored gloves, forearm guards, leggings, boots and shoulder pads. He also had a gold cape cut into strips and golden armor protecting his torso. He wore two separate gold masks over each eye. His hair, meanwhile, was long and curly. [X-Force (1st series) #43]

7) Sunspot donned a new look after the Age of Apocalypse which complemented his new powers. While most of his outfit was as black as his solar-powered skin, he wore gold-colored protective gear over his chest, shoulders, elbows, hands, knees, feet and groin. This gear also boasted storage compartments and a red “X” in the center of the chest where it buckled together. [X-Force (1st series) #44] 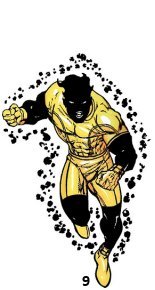 8) While heading up X-Corporation: Los Angeles and teaming up with the X-Treme X-Men, Roberto wore the standard X-Men togs of the Xavier Institute. This consisted of a black leather pants and a ribbed grey undershirt worn with yellow X belt, a black and yellow X leather jacket and matching boots. [X-Treme X-Men (1st series) #42]

9) Sunspot’s costume during his time with Cable’s reunited X-Force consisted of a one-piece, short-sleeved, yellow jumpsuit with gray fabric over the shoulders and on the interiors of the legs. He wore this otherwise simple outfit with yellow gloves and boots. [X-Force (2nd series) #2]

10) As Lord Imperial of the Hellfire Club, Roberto donned the colonial attire worn by the club’s members, representing a time when men were constrained only by the limitations of their own abilities, and not the needs of society. In Roberto’s case, this meant wearing his hair in a ponytail tied with a ribbon, wearing a coat with tails and a high collar, breeches, vests and a ruffled scarf over his throat. [X-Men Legacy #210] 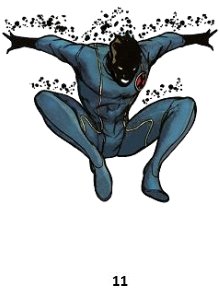 11) When Sunspot mentored the Young X-Men, he wore a uniform very similar to Cyclops’s blue wetsuit, only without the hood and visor. [Young X-Men #6]

12) A play on the classic yellow-and-black X-Men uniform, Sunspot’s current New Mutants costume consists of a black, one-piece jumpsuit with a broad, yellow “X” across the torso that extends into the shoulders and arms. With this, he wears yellow boots, yellow gloves and a black “X” logo over his heart. [New Mutants (3rd series) #1]

13) Sunspot’s Avengers uniform retains many of the elements of his classic New Mutants uniform, such as the black and yellow color palette. Durable dark grey fabric surrounds the V-shaped yellow pattern on the torso, arms and legs, and black lines highlight the length of his limbs. Additionally, the uniform boasts a stylized logo of a sunspot on its chest. [Avengers (5th series) #1]

14) Roberto Dacosta has recently taken on more of an administrative and leadership role in his teams. Consequently, he began wearing business suits more often than actual costumes. With the instability added to his powers by the M-Pox, Roberto also wears a headband designed by Toni Ho to help regulate his power levels. [Avengers (5th series) #35]