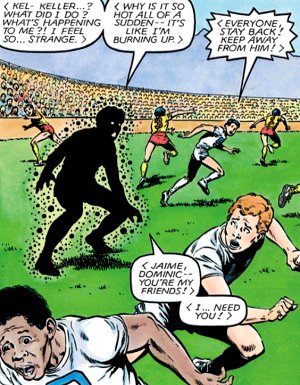 love, their marriage grew tense because of Nina’s dangerous archeological expeditions and Emmanuel’s endless quest for more wealth and political power. Still, Roberto grew up admiring traits in both his parents. As he matured, it became clear he inherited both Nina’s adventurous spirit and Emmanuel’s ambition. Roberto more than just admired his dad, though; the two of them did everything together and were more akin to best friends than father and son. Roberto excelled at football and eventually played for the prominent Vilar School Thunderbolts, where his coach began grooming him to one day play on Brazil’s Olympic team. Somewhat of a teen celebrity, he even graced the cover of a popular magazine targeted at adolescent girls. [Marvel Graphic Novel #4, New Mutants (1st series) #7 & #21, X-Force (1st series) #78]

Roberto was 14 when his mutant powers manifested during a highly publicized football match. While enduring a physical beating from the rival team, his body began absorbing sunlight and 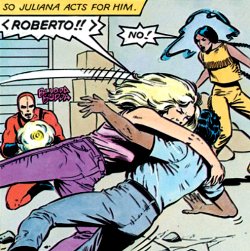 super-charged his strength. As he pushed his assailants away, his body turned pitch black. His uncomprehending teammates—and the entire audience—fled in terror. Only his father and his girlfriend, Juliana Sandoval, rushed to his aid. Roberto’s highly public transformation attracted the attention of both Donald Pierce of the Hellfire Club and Professor Charles Xavier. Regrettably, Pierce got to him first. His Hellfire Club agents kidnapped Roberto’s girlfriend Juliana and held her for ransom. When Roberto brought the ransom, the guards, revealing their true intentions, prepared to kill both of them. Roberto fought back, calling on his newly discovered mutant power. Although he fought valiantly, he quickly ran out of energy, leaving both him and Juliana at the mercy of the guards. Fortunately, Xi’an “Shan” Coy Manh and Dani Moonstar, new recruits of Xavier’s, arrived at that time and intervened, giving Roberto the upper hand. The New Mutants emerged victorious, but not before Juliana took a stray bullet and died while saving Roberto’s life. 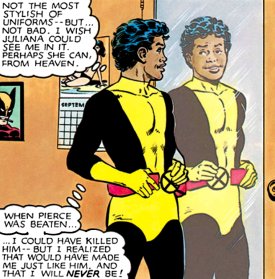 Vowing revenge, Roberto traveled to the United States with his new friends to save the captive Professor Xavier from Pierce. Although they came into conflict with another young mutant named Sam Guthrie who was working for Pierce, Roberto and his friends proved victorious, defeating Pierce and rescuing Xavier. Roberto could have killed Pierce for what he did to his girlfriend, but he restrained himself. Along with Dani, Shan and Rahne Sinclair, Roberto joined Professor Xavier’s School for Gifted Youngsters in Westchester. Roberto was surprised when Sam Guthrie showed up too. At first he did not trust Sam because of his initial alliance with Pierce, but decided to give him a second chance at Xavier’s urging. Roberto adopted the codename Sunspot. He quickly became close friends with Sam, whose nom de guerre was Cannonball. [Marvel Graphic Novel #4, New Mutants (1st series) #1]

During a battle with Viper and the Silver Samurai, the New Mutants were caught in a deadly, cliff-side explosion and tumbled into the ocean. They lost their teammate Shan in the fall and believed her dead. Roberto in particular blamed himself for her death because he failed to pull her from the waters. He even went as far as to quit the team out of personal frustration and anger at Professor X, who seemed to insist prematurely that Karma was gone forever. However, his teammates coaxed him back into their ranks. Upon returning, Roberto was surprised to discover that Professor X had contacted his mother, Nina da Costa, and arranged for the team to accompany her on an archeological expedition up the Amazon River as a vacation. They agreed to depart with her to Rio de Janeiro the following week. [New Mutants (1st series) #5-7]

During their week-long respite back at Xavier’s, Roberto and his teammates made an excursion into New York City and attracted the unwanted attention of a group of street thugs. The New Mutants retaliated but, in the ensuing battle, Sunspot and Wolfsbane were knocked unconscious, kidnapped and taken to a scientist who tested experimental drugs on teenagers. The scientist intended to transform Sunspot and Wolfsbane into pawns he could use to combat two of his former subjects, Cloak and Dagger, who were now crime-fighters dedicated to stopping crimes like his. Before the New Mutants, with the help of Spider-Man, Cloak and Dagger, could save them, both Bobby and Rahne were injected with the same synthetic drug that gave Cloak and Dagger their powers. The darkness of the drug consumed both of them, amplifying their powers and driving them berserk. Luckily, Cloak and Dagger nullified them and dispelled their enhanced abilities. Roberto and the others assumed they were free of the drug’s influence— an assumption they would later discover to be wholly false. [Marvel Team-Up Annual #6]

A few days later, Sunspot and the New Mutants traveled to Rio de Janeiro to join Nina da Costa on her expedition. The night before the trip, they stayed at the da Costa mansion, where Roberto’s parents mortified him in front of his friends by bickering at the dinner table. The voyage, meanwhile, seemed ill-fated from the outset: thugs attempted to kidnap Mrs. da Costa before the trip began and, when the New Mutants attempted to rescue her, Sunspot had to single-handedly battle a brute named Axe. They rescued Nina and proceeded with the voyage. On the trip, however, a treacherous shipmate drugged everyone onboard and sent the boat careening over a waterfall. Upon reaching the shore, Sunspot and the New Mutants were captured and enslaved by a displaced colony of Romans. Once in their realm of Nova Roma, he and Cannonball were forced to do battle in a combat arena. However, the special powers they possessed quickly elevated them from slavery to royalty. Upon ascension, the New Mutants prevented a corrupt politician and his murderous wife, the ancient mutant sorceress Selene, from overthrowing the ruling political party. When Sunspot confronted Selene, he hurled her into a volcano, apparently killing her. 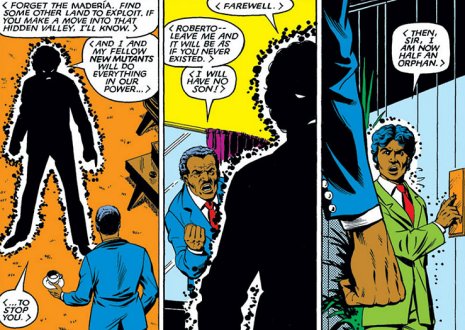 As if this adventure had not traumatized him enough, Roberto also learned that his father orchestrated both the sabotage attempts on Nina’s expedition and the coup in Nova Roma, all in the name of acquiring the land so he could profit off of its natural resources. Once back in Rio de Janeiro, Roberto confronted his father regarding his role in both schemes. He angrily renounced all ties with Emmanuel and left, desiring neither his wealth nor his excuses. [New Mutants (1st series) #8-12]

The expedition had a bright-side: while in Nova Roma, the New Mutants added a new member to their ranks, the Nova Roman girl Amara Aquilla. When the team returned to Westchester with Amara, who adopted the codename Magma, Roberto worked his signature charm on her to make her feel comfortable at the school. [New Mutants (1st series) #13]

Sometime later, seemingly without cause, Sunspot began acting sullen and angry. He lashed out at Colossus during a training session and then assaulting him later off campus. During a 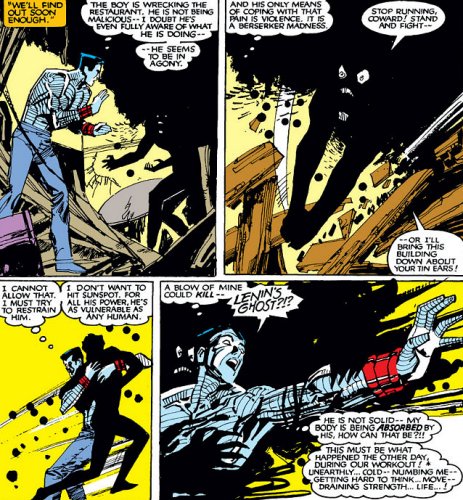 subsequent attack, an eerie shadow emanated out of Roberto’s body and engulfed Colossus—an ability similar to the one possessed by the superhero Cloak. Colossus fell into a coma, while Sunspot’s bouts continued. When Roberto’s peers realized Wolfsbane was suffering from a parallel affliction, they deduced that the experimental drugs forcibly injected into their bodies—long believed dormant—were the culprit. Worse, they had apparently stolen the powers from Cloak and Dagger, who were now normal teenagers. However, while Cloak and Dagger could control these powers with (relative) ease, Roberto and Rahne could not control them at all. When they both seemed lost to these malignant forces forever, Cloak and Dagger returned and volunteered to take back the burden of their powers. Magik and the X-Men helped purge the shadows from Sunspot’s body and returned them to Cloak, leaving Roberto with no demons to wrestle other than his own. [New Mutants (1st series) #22-25]

Shortly thereafter, upon arriving at a pool party at a local high school with Cannonball and Magik, Sunspot and Magma were kidnapped by a band of thugs and taken to Los Angeles, where they 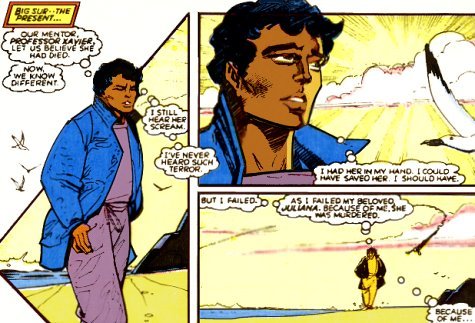 forced to fight other combatants to the death in the Gladiator Arena. They were given drugs that enhanced their powers and their thirst for blood, but ultimately it was the Arena owner’s threat to slaughter a group of innocent children if they did not fight that compelled Sunspot and Magma to cooperate. Regardless, Roberto vowed to Amara they would break free. It took over a week for their friends to locate the missing New Mutants and, in that time, Roberto once again had to battle the gladiator called Axe, the same hired thug who had earlier kidnapped his mother. Eventually, their friends arrived to mount a rescue attempt and, after confirming the threat to slaughter innocent children was a bluff, Roberto and Amara broke free. They then confronted the Arena’s orchestrator, who appeared to be the lost Shan, now possessed by the Shadow King. Roberto was enraged when he correctly deduced that Professor X must have known Shan was alive all along. Roberto felt that he had failed to save Shan just as he had failed Julianna. The burden of his guilt and his frustration with Xavier's decision to hide the truth from them grated on him, and he became increasingly hot-headed and abrasive toward his teammates. [New Mutants (1st series) #29-34] 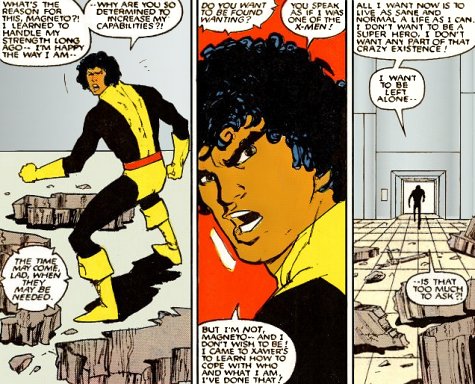 Roberto’s agitation only increased when Professor X, after suffering a critical injury, appointed the notorious Magneto as headmaster of the school. Roberto instantly clashed with this new mentor. Worse, his encounter with the omnipotent being the Beyonder provoked in him an existential crisis: what was the point of saving lives if the Beyonder could eradicate everything— including the entire universe —with a mere thought? Despondent, Roberto quit the New Mutants in a fit of rage and returned to Rio de Janiero to live with his mother. [New Mutants (1st series) #35-37, Secret Wars II #5]