1) When Elizabeth placed the tiara on her head, she was transformed into Talisman and suddenly wore this flowing red and yellow costume. Despite it being rather revealing and very appropriate for Elizabeth’s powers, it was not very practical. [Alpha Flight (1st series) #19]

2) After coming out of a coma and finishing her physical therapy, Elizabeth wore the standard Department H training costume for a short while. [Alpha Flight (1st series) #110]

3) When it was decided that Beta Flight was ready for field duty, Talisman and the other members received their own official team uniforms. Just like Alpha Flight, Beta Flight’s uniforms had a 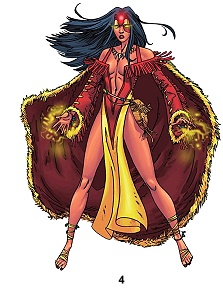 maple leaf logo on them, though the design was somewhat different and the suits were of gray and dark red color. [Alpha Flight (1st series) #112]

4) Following Shaman’s death, Talisman has adopted a new costume which combines elements of her original costume with the native elements of her father’s, including a fur-lined off-the-shoulder cape, a bone-carving necklace and her father’s medicine pouch. Elizabeth also has a strange marking over one eye, the significance of which is unknown. [She-Hulk (3rd series) #16]