1) Transformed by the magics of the Fire Fountain, Heather wore an exotic costume that consisted of thigh-high chrome yellow boots with large cuffs around the opening, red clothing cover her upper legs, mid-section and chest, yellow chrome gloves and belt with a large buckle, red gloves and a short white fur cloak and a fur trim around her mid-section. The costume was topped off with a yellow helmet that covered her head and a large, feathered mask covering her eyes. [X-Men / Alpha Flight (1st series) #1-2]

2) As Alpha Flight's non-powered leader, Heather wore a variety of civilian clothing. Of particular note was a red and white ensemble, presumably inspired by Guardian's costume. Red mid-calve boots met white tights supported by a yellow belt and a red holster. A red jacket sat at her hips, and it had a large collar which was white on the inside. Yellow bands cuffed the jacket and white gloves covered her hands. She also wore green goggles over her eyes. At times, she wore a version of this outfit with a white skirt instead of tights. [Alpha Flight (1st series) #26]

3) Taking up the mantle of Vindicator, Heather wore this red and white classic costume, also worn by Mac, which was based on the Canadian flag. Red panels ran down the sides of white bodysuit, with the left hand side displaying a half maple leaf over Heather's upper body. White gloves and a white head covering with blue goggles rounded out the costume. Heather later switched to red goggles. [Alpha Flight (1st series) #32]

5) When Alpha Flight wore matching team uniforms for the first time, the uniform was similarly based on the Canadian flag, consisting of a red bodysuit with a white stripe running along the right hand side of the body, and a white band across the upper left arm. Red panels covered the arms, which were topped off with white gloves and a white maple leaf over the left of the chest. Heather wore clear, square goggles with this costume. [Alpha Flight (1st series) #104] 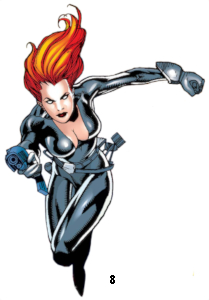 6) When Alpha Flight embarked on their 1992 World Tour, their team uniforms were lost en route to the United States. Guardian and the rest of Alpha Flight were given spare X-Factor costumes, as the two teams were working together. Heather retained use of her electromagnetic powers because she was wearing her battlesuit under her civilian clothing. [Alpha Flight (1st series) #107]

7) Following the re-establishment of Department H and Alpha Flight, Heather went back to the Vindicator codename and was given a new battle suit that controlled geothermal phenomena, giving her a unique set of powers. The costume was essentially a green and white version of her classic red and white costume, with a green maple leaf running down the left-hand side of her body, and a narrow green panel across the middle of her chest, joining the two green sides of the costume. Green panels covered Heather's chin and cheeks, while large yellow shoulder pads, sleeves and boots rounded the costume out. [Alpha Flight (2nd series) #1] Eventually, the battlesuit was slightly modified as per requests Heather made, including the re-instating of goggles to protect her eyes, and larger gauntlets and boots. [Alpha Flight (2nd series) #14] Apparently, Heather returned to wearing contact lenses for unknown reasons, as she was later seen in combat without the goggles.

8) During her brief tenure as Alpha Flight's liaison to Department H, Heather wore a low-cut, black spandex one-piece, with chunky black gloves and a loose belt which had a few accessories and weapons attached to it. She also carried a gun at this time. [Wolverine (2nd series) #142]

-) When called upon to battle the Juggernaut, Vindicator's battlesuit was enhanced with armor that would allow her some protection against the powerful Juggernaut. She has not worn the armor at any time since the battle. [Uncanny X-Men (1st series) #432]

-) When she returned during the Chaos War, Heather was wearing her original red and white costume, but retained the geothermal powers of her most recent battlesuit. [Chaos War: Alpha Flight #1] 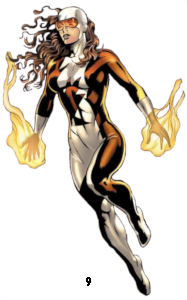 9) – With Alpha Flight reborn following the Chaos War, Heather switched the design of her classic red and white costume so that when she and Guardian stood next to each other, with Heather on the left, their connecting sides would form a large red maple leaf. [Alpha Flight (4th series) #0.1]

-) During the Wendigo crisis, Heather was once again wearing her green and white costume. [Amazing X-Men (2nd series) #8]