Heather McNeil grew up in Calgary, Alberta, the eldest daughter of Ramsey and Claire McNeil. The McNeils lived next door to renowned surgeon Dr. Michael Twoyoungmen, his wife Kathryn and their daughter Elizabeth. Several years older than Elizabeth, Heather would often babysit her during the time when Kathryn became ill and Michael was busy caring for her. Heather was concerned for the young Elizabeth, especially when Michael promised her that he would save her mother, as Heather knew they Kathryn was dying of cancer. Sure enough, when Kathryn died soon after, Elizabeth hated her father for failing to save her mother and was afterward fostered by

Heather took her first job working as the secretary for Jerry Jaxon in the Edmonton office of Am-Cam Petroleum. It was there that she met brilliant scientist James “Mac” MacDonald Hudson, who was developing an exploration exo-skeleton to work with a cybernetic helmet that he previously designed. Hudson was preoccupied with his work and barely gave any attention to Heather. When Mac quit Am-Cam after Jaxon sold his suit to the American military, Heather found herself unable to continue working for him and quit as well. She afterward invited Mac back to her place, but he declined. [Alpha Flight: In the Beginning #minus1, Alpha Flight (1st series) #2]

Nevertheless, the two began to see each other socially. A short time after Mac had left, an unknown party had broken into Am-Cam, destroying the blueprints and using the exo-skeleton for escape, ultimately abandoning it on a nearby hillside sans its cybernetic helmet. When Heather 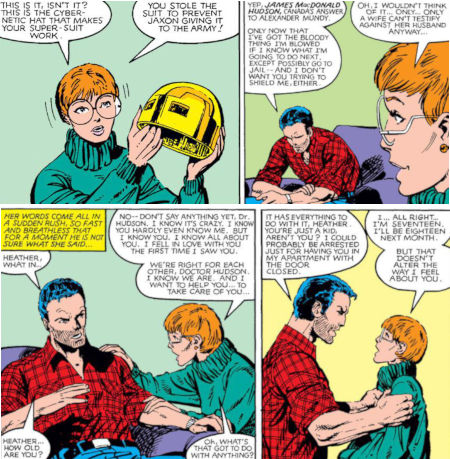 arrived at Mac's apartment with some groceries, she saw his original cybernetic helmet in the living room and immediately realized that it was Mac who broke into Am-Cam. Mac confessed both to the crime and that he wasn't sure what he was supposed to do next. He also informed Heather that he didn't want her to try and shield him – which is when Heather suggested they get married. Mac was against the idea and was still at a loss for how to deal with his situation – but Heather had a plan. The two journeyed to Parliament Hill, where a meeting with Mr. Hulme produced interesting results. Not only was Mac retro-actively employed by the Canadian government, but the government planned to reimburse Am-Cam for any damages and set about the formation of a special ops branch of the Ministry of Defense – Department H.

Heather and Mac began a serious relationship but, while Mac was busy re-building the exo-skeleton from memory and working on establishing Department H, Heather found herself at times neglected. On one such occasion, she expressed her feelings to Mac, who promptly proposed to her. A short time later, the wedding day loomed – only it wasn't the wedding day Heather had imagined. As she and Mac waited for their appointment with a Justice of the Peace, Heather's parents showed up and told Heather that, if she wasn't married in a Catholic church, then she wasn't married in their eyes. They also advised her to leave the insensitive Hudson. Mac promised Heather a big wedding, but she agreed with her parents that, until they did it right, she couldn't consider them married either. Nevertheless, they married before the Justice of the Peace. [Alpha Flight (1st series) #3, Alpha Flight: In the Beginning #minus1]

In between acting as secretary to Mac as Department H was set up, during which time she noticed some reports about the adamantium bonding process on Mac's desk [Alpha Flight (1st series) #34], Heather set about planning her real wedding to Mac. Mac came home from a day at Department H and informed Heather that the Department was sending them on their honeymoon in the north. Trekking through the snow-covered terrain, Heather and Mac were set upon by some sort of wild-man, who attacked Mac. Though Heather shot the wild-man, they discovered he was 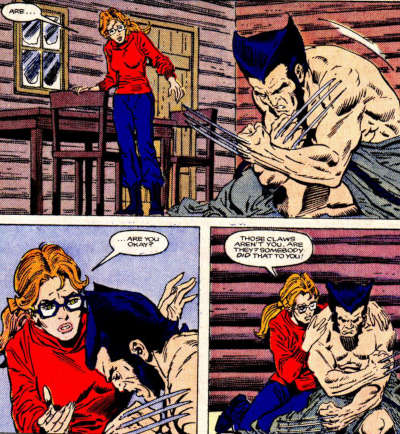 still alive, so they took him to their cabin, despite Heather's reservations. To their surprise, the man’s wounds healed quickly, clearly supernaturally. Mac attempted to reach Department H by radio, to no avail, so he left to get help for the wild-man, leaving Heather alone with him. Heather was not happy about this but Mac told her this mysterious man was valuable to the department. Heather pulled herself together and played nursemaid to the wild-man. She was aggressive towards him when he woke, but they were both equally surprised when metal claws popped from his hands. When the mysterious man howled in pain, Heather could only stand in shock and watch him at first. However, she soon realized that someone must have done this to him and she went over to him, putting her arms around him to comfort him. [Alpha Flight (1st series) #33] 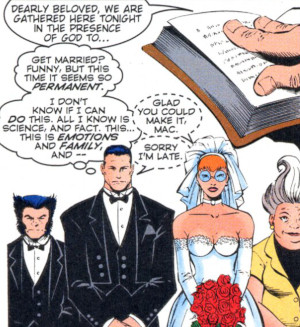 Heather continued to support Mac during the formation of Department H and they became close friends with the wild man, who once he came to his senses told them his name was Logan. Logan was soon dubbed Weapon X, the first super-powered operative of Department H. It was soon thereafter that Heather and Mac finally had their big wedding in a church, with Logan at their side. [Alpha Flight: In the Beginning #minus1] On one occasion, when Heather saw her parents, they once again disapproved of her relationship with Hudson and didn't like her hanging around with Logan either. Ramsey even told Hudson that he would get himself killed. [Alpha Flight (1st series) #47] Around this time, Heather alerted Mac to the emergence of the Fantastic Four and Mac decided there might be a need for a team of super-powered individuals in Canada. [Alpha Flight (1st series) #3]

Heather and Mac took a trip to visit Heather's old neighbor, Michael Twoyoungmen, and while camping with him met his ward, the mysterious Narya. Heather didn't recall anything about Narya from her youth, and wondered where she came from. Later that night, Heather witnessed Narya transform into a snowy owl. Ultimately, Narya would become the next recruit into the Department H's super-team, now dubbed “The Flight.” [Alpha Flight (1st series) #8]

When Logan suddenly cut his ties with Department H and defected to the States to join the X-Men, Mac was forced to assume leadership of the team as Vindicator, despite his own and Heather’s reservations. Defense officials were furious, considering how much time and money had been invested in Weapon X, so Mac was sent to bring him back from the States. The mission was a disaster and Mac returned to his Ottawa home which he shared with Heather a wreck. Heather comforted Mac as he vowed to be a good leader to the Flight. [Alpha Flight (1st series) #17, Classic X-Men #16]

Around the time Alpha Flight, as the team ultimately came to be known, made its debut as Canada's premiere super team, Heather and Mac decided that they wanted children, but wondered how they would be able to afford them. Heather was also reunited with Wolverine for the first time since he abandoned the Flight for the X-Men, as he arrived at her home looking for Hudson. The reunion was pleasant and it appeared that the anger towards Wolverine for his defection had passed. [X-Men (1st series) #139]

Unfortunately, before Alpha Flight really had a chance to make much of an impact, Department H was shut down and Alpha Flight (along with the training teams Beta and Gamma Flights) was disbanded. Heather was at home when Mac returned from his last day at Parliament Hill, but they barely had time to discuss their next plans when Gary Cody, who was Alpha Flight's government liaison, phoned them and suggested they turn on the television. What they saw was a strange manifestation of the Northern Lights over Resolute Bay. Heather was reluctant for Mac to go alone and, when she suggested he contact the rest of Alpha Flight, he reminded her that there was no 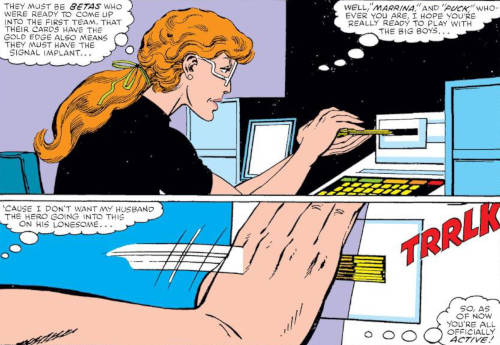 Alpha Flight. Taking matters into her own hands, Heather went into their secret office, which Mac had left in disarray, and gathered the computer cards which contained codes to contact Alpha Flight members. Among them, she noticed two membership cards she didn't recognize, and assumed they were Beta Flight members who were to be upgraded to Alpha Flight. She placed them all into the computer, sending out the Alpha Flight signal and effectively re-activating the team.