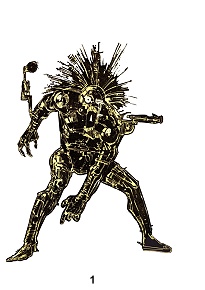 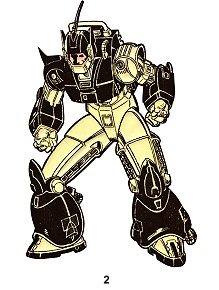 1) When Warlock first appeared, his techno-organic form was loosely humanoid and constantly shifting. As he became acclimated into human society, his form became more refined. He would often mimic human forms when in public and his default forms were often influenced by human technology and culture. His child-like outlook on the world was often reflected in the almost cartoony aspects of his form. [New Mutants (1st series) #19]

2) Warlock would often take the form of sophisticated battlesuits in order to protect his teammate, Cypher. While not a costume in the traditional sense, this is one of the forms Warlock assumed often in battle. [New Mutants Special Edition #1]

3) When the New Mutants donned their “graduation costumes” to save the X-Men from Mojo, Warlock adopted a stereotypically heroic form. This look included a stylized “W” on his chest, a flowing red cape and skullcap style mask. On occasion, he also added an X-Men belt buckle. When in this form, Warlock would sometimes shape-shift so that he appeared to be a humanoid wearing a techno-organic suit. [Uncanny X-Men Annual #10] 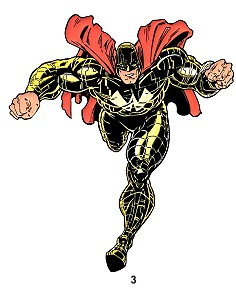 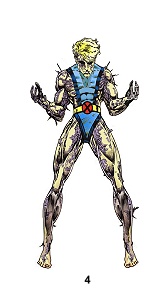 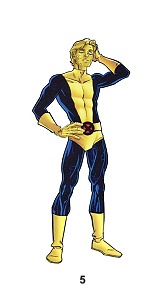 4/5) Douglock not only mimicked Doug Ramsey’s face but aspects of his costume as well. He would alternate between the traditional blue and gold training uniform of the New Mutants and an inverted color scheme that left much of his techno-organic form exposed. This consisted of a blue tunic and briefs that replaced the yellow portions of the New Mutants uniform, as well as the traditional X belt. [Excalibur (1st series) #78-79] 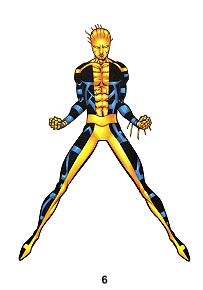 6) Warlock’s current form is combination of all his previous incarnations. His default form is that of a youthful humanoid body with a bald head, perhaps with a few stray strands of techno-organic “hair” here and there. His “costume” in this form consisted of a black bodysuit with blue designs on the arms and legs. A broad yellow stripe ran down the center of the chest and legs. A yellow belt completed the outfit. At times, Warlock would also manifest a tattered red cloak. [Warlock #1]