1) As White Queen of the Hellfire Club, Emma wore the outfit she had when hired as a dancer; a white corset and panties, thigh-high white boots, opera gloves and a fur-trimmed cape. While other women chafed against the Hellfire club’s dress code, Emma actually relished using her sexuality as a weapon. [X-Men (1st series) #129]

2) When Emma became a teacher for Generation X, she wore a more street clothes-like outfit, though it was by no means demure. White tight pants, a zipped-up bodice, a choker with an x-symbol and a white blazer. [Uncanny X-Men (1st series) #318]

3) Later, she switched to a body-suit, similar to the ones worn by the Generation X kids with a yellow X-belt and clunky golden gloves and boots, though Emma’s outfit was naturally white and, Emma being Emma, it was zipped down far enough to show quite a bit of skin. [Generation X (1st series) #43]

4) Having joined Xavier’s teaching staff, Emma is wearing one of the X-Men’s uniform, though hers is considerably scantier and, of course, white. Alternately, long leatherpants or hotpants, combined with some strategically placed scraps of clothing on her breasts and neck leave enough of her chest and stomach free to form an X. In addition, she wears platform boots and a long white trenchcoat. [New X-Men (1st series) #115] 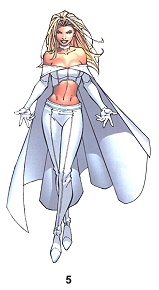 5) In an attempt to appeal to the public and the media, this team of X-Men have returned to more traditional superhero outfits. Emma opted for a slightly more conservative look than her previous costumes. Her costume consists of long white opera gloves, white leather pants that disappear seamlessly into white boots, a white belt and choker (both of which sometimes include an X symbol) and a white leather bodice that leaves her midriff exposed and has a long white cape that emerges from the bustline. [Astonishing X-Men (3rd series) #1]

6) After re-opening the Xavier Institute and installing herself as headmistress (alongside Scott Summers), Emma took to wearing this toned down version of her previous costume while functioning as the school's administrator. It consists of a daring criss-crossed X top, white pants and boots, a white belt with squared X buckle, a choker with a dangling X symbol and a sleeveless vest/trenchcoat. She uses this outfit for school functions reserving her "superhero" costume for missions alongside the X-Men. [New X-Men: Academy X #1] 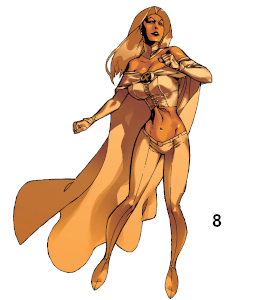 7) In her first turn as a host for the Phoenix Force, Emma Frost wore Dark Phoenix colors. She was attired with a dark red bralette, leggings, sleeves. A golden sash was draped around her waist and a Phoenix emblem worn as a large choker on her neck. [X-Men: Phoenix - Endsong #4]

8) After moving to San Francisco, Emma adopted a modified version of her previous costume. The crop top was replaced with a laced corset and a large 'X' symbol placed on her chest over her shoulderless cape. Emma being Emma, she allowed for some variety with her outfits. Sometimes there were bell bottoms. Pants were optional. [Astonishing X-Men (3rd series) #25] 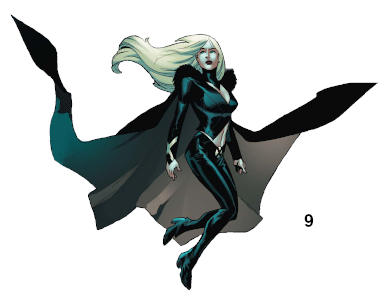 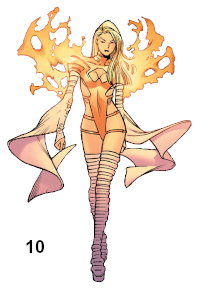 9) Emma's costume with the Dark X-Men was in the new identity as the Black Queen. Similar to her traditional costumes, Emma wore a long-sleeved black top with a plunging neckline and open midriff evoking an 'X' design of exposed flesh. She had a large 'X' on each glove and her belt buckle. Her cape had black faux fur along the shoulders. [Dark Avengers / Uncanny X-Men: Utopia #1]

10) As the Phoenix, Emma wore a thin golden one piece, lightly evoking the Phoenix firebird design. It was held to her bare sides by thin white straps. Golden epaulets extended from her shoulders, and she also wore a white cape and long white gloves and leggings. [Avengers vs. X-Men #5] 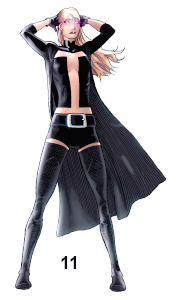 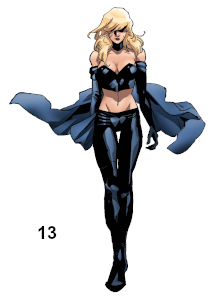 11) While she still answered to the title of White Queen, Emma went for an all-black ensemble after the Phoenix incident. The skintight black leather shirt had an exposed section straight up her chest, ending in a metal loop around her color. She wore black booty shorts, thigh high boots, gloves and an overcoat with 'X' insignia on the shoulders.  [Uncanny X-Men (3rd series) #1]

12) As the secret queen of New Tian, Emma Frost wore a version of her White Queen attire. This included white leggings, a bustier which ended in a cut-out 'X' over her navel, opera gloves and a high-collared cape with shoulder furs. [X-Men: Blue #7]

13) When she became the Black King, Emma kept her traditional wardrobe, but in black. [Uncanny X-Men (5th series) #18]

14) After reclaiming her role as the White Queen for the Quiet Council and Hellfire Trading Company, Emma arranged for her entire wardrobe to be concocted by mutant fashion designer Jumbo Carnation. She now wears a variety of different outfits and styles with the sole caveat of everything being white. [Marauders #1]