Originally, much of what would be used for the Magneto Event Month was to be used in a joint Xavier/Magneto/Onslaught Event Month. The theme derived from the fact that, while Xavier was indeed Onslaught, it was the merging of Xavier and Magneto’s personalities that created the deadly foe. However, it soon became apparent that there was too much material for even four weeks of daily features. As a result, the Xavier-centric themes were separated and released in 2005 for the fifth Event Month month: “Xavier/Onslaught.” This was just as well, as the Marvel-wide House of M storyline began a few months later and our eventual coverage of the mega-crossover fit extremely well with the Magneto-centric Event Month.

As the date of the Event came close, it was suggested at nearly the last minute to put together a greeting of sorts from Magneto himself, welcoming the UXN visitors to the event. Since the Master of Magnetism has been prone to bombastic hyperbole about his abilities and self-importance, the greeting would be written in kind. Below is a pre-announcement made the weekend before the Event Month began, followed by the greeting from Magneto and his family.

Ladies and gentlemen - and children of all ages. You are cordially invited to an Event, right here at the UXN. Festivities will begin on Monday, September 3rd. Promptness will be appreciated, though since it will last for a whole Month, punctuality is not a necessity. Feel free in invite your friends and family. There will be room for all.

A Warm Welcome from Lord Magneto...

Though you are indeed inferior to me and those who share the more highly evolved genetic stock that makes us Homo superior… you are also my loyal subjects. Therefore, you are to be commended for your wisdom in being ruled by me and my family, the House of M. 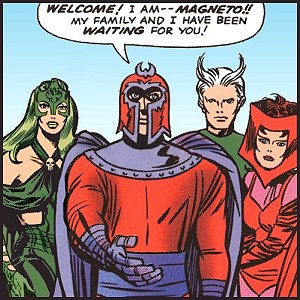 Last week, we announced a celebration – an Event you might call it. This Event shall be a celebration of… well… me and everything associated with me. The purpose of this is not only to exalt me, which should be reason enough, but to help you, the pathetic little people, know me better. In that way, I am doing you a favor – and as such accept in advance the gratitude you undoubtedly already feel about it.

Since my history and exploits are legendary, spanning decades, dozens of technological discoveries and deeds far beyond the paltry twelve labors of mythical Hercules, it will take a whole Month in order to sufficiently tell this story. You will be expected to return daily for the next part in this epic tale, for each day shall bring something new.

To accomplish this goal, I have conscripted a small group of creative people. Though their creativity pales in comparison to me, who has designed and constructed more than one orbital fortress, they have acquitted themselves well for being mere lowly humans. You are directed in advance to be grateful to them for their labor, though obviously to a lesser degree than toward me, whose greatness made all of this possible.

So, in conclusion, enjoy the festivities here to which you were invited, and had the wisdom to accept. Enjoy yourselves! Magneto has commanded it!