UXN SITE TIMELINE - PAST, PRESENT AND FUTURE: Page 3 of 4

Site Appearance Like many aspects of the site, the UXN has not always looked like it currently does. Thanks to the website www.archive.org, we have been able to reach back through the window of time and resurrect a few of our former site templates:

Here is how the site appeared when it began on August 2000, and would be used during the site’s first nine months. This particular shot is from February 2001. As you can see, there were no Latest Site Updates box, no Spotlight On box and no random issue generator on the left. Note, however, that the random X-Fact has been a part of the site since the beginning. 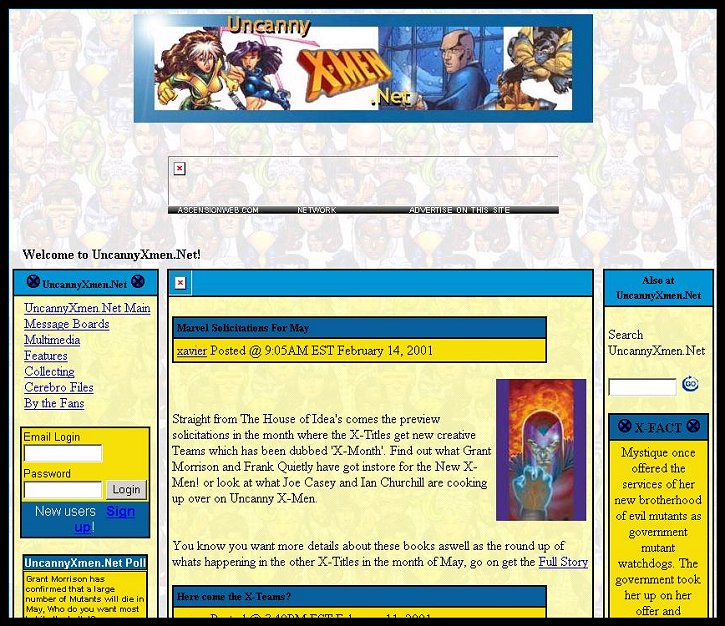 Until April of 2001, Dean was working on the site by himself. During that time it was mainly a X-related news site, not much different from other ones. However, while making himself known on other message boards, Dean met Peter Luzifer, who had his own site called “Point of View – the Other Side of the X.”

Peter’s site was mainly one not of news, but of articles, which current day visitors of the UXN would recognize as being templates for our modern articles. In fact, most of the villain articles are fairly unchanged from their original version on his site.

Shortly after the merger of the UXN and Peter’s site, a new look was needed. Not only was the new logo a more dynamic one, but it allowed Dean and Peter to insert characters in the letters, changing them during special occasions. While the current logo is different in format than this version, the concept of changing the characters therein is still used today.

Here is a snapshot of the site from May 2001. Note the link to Peter Luzifer’s original website, the “Other Side of the X” in the X-Foes box in the bottom left. The link was kept for several months during the sites’ merger and was removed once it was complete. 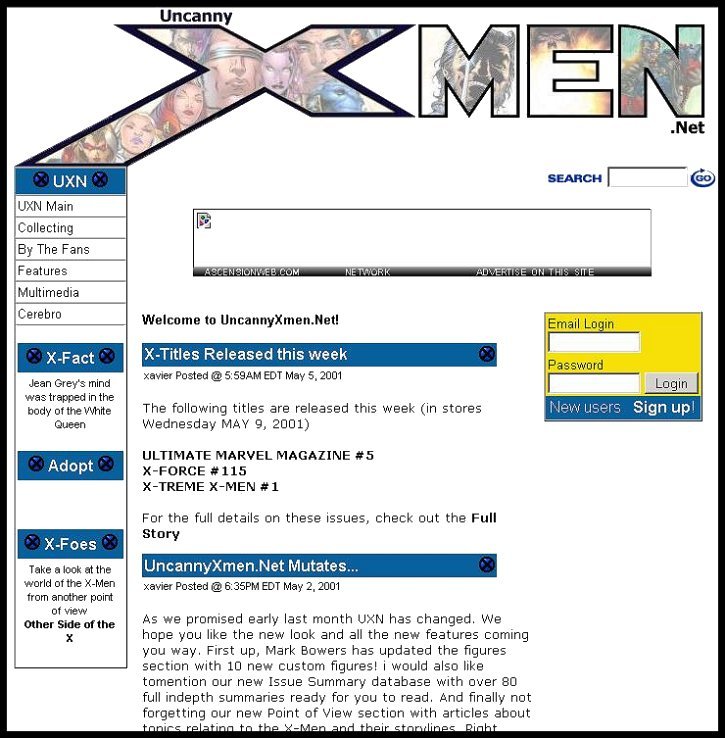 It was in the late summer of 2001 that the Latest Site Updates box was added. Initially the count was for 10 updates in the box, but this was later changed to 12. In the early days, when we had fewer Contributors, the number of daily updates weren’t as many. Later, as we enjoyed a larger staff, we had the unique problem of having too many updates per day. It was decided that we would have no more than 3 updates in one day. It was at this time that the number of updates changed from 10 to 12, as 12 is more easily divisible by 3. Now the work by a contributor would be seen for a minimum of 4 days before dropping off.

Here is a shot from our November 2002 event month regarding the Age of Apocalypse. This was still during our second format, with the AoA Event logo superimposed. Notice that, by this time, we had added a second update box for Spotlights. 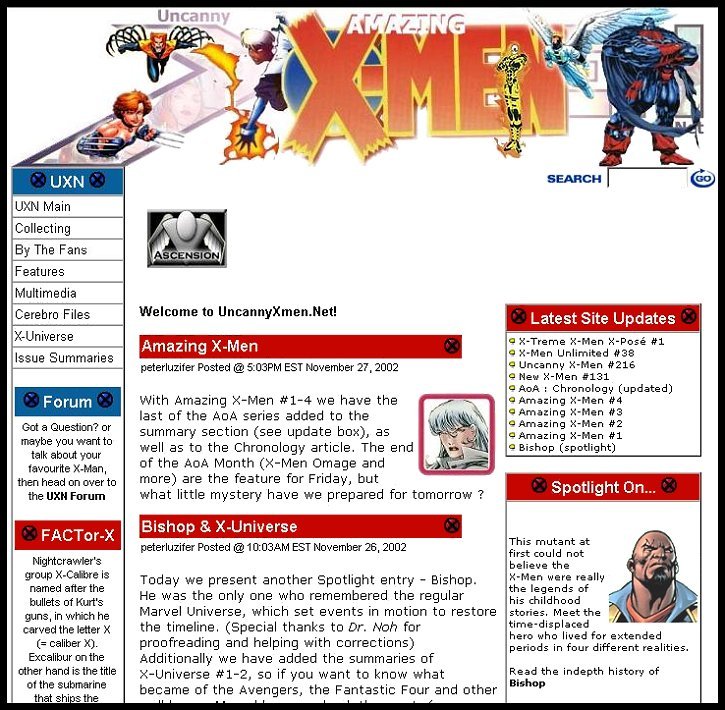 Our third logo was the current one we use. Unfortunately, for awhile we had to deviate from it… This shot is our fourth format, which unhappily had been imposed upon us by our then host, Ascension Web. The format was mandated since Ascension Web, who gave us free hosting (for which we are still grateful), wanted all of the sites that they hosted to have a uniform appearance. 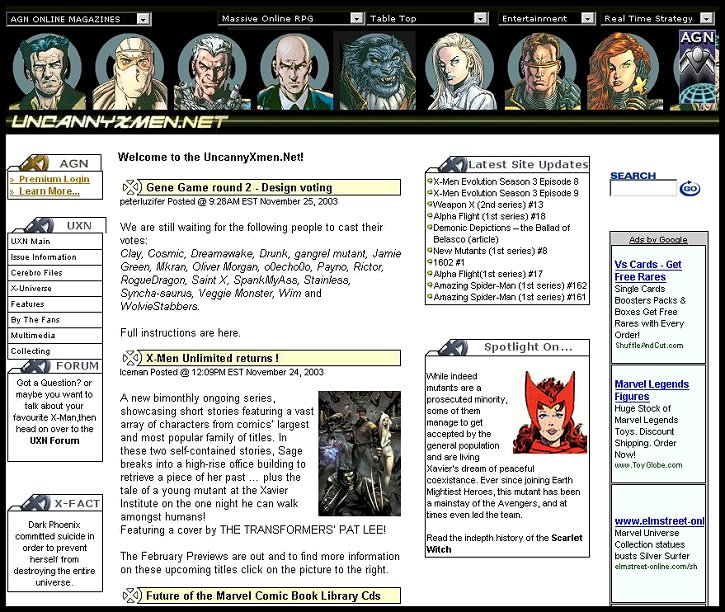 Again, while we will always be grateful to Ascension Web for giving us the free hosting for years, this demand moved up our long-term goals for purchasing our own hosting package. In mid-May 2004, we made the big move. After the switch, we returned to our third format, which we still use and enjoy today.

In September 2007, the UXN debuted its fifth event month, this one dedicated to all-thing Magneto. A moment of inspiration led us to slightly tweak the Front Page, adding an ominous House of M emblem in the background, seeming to put its stamp of approval on all features released during that month. 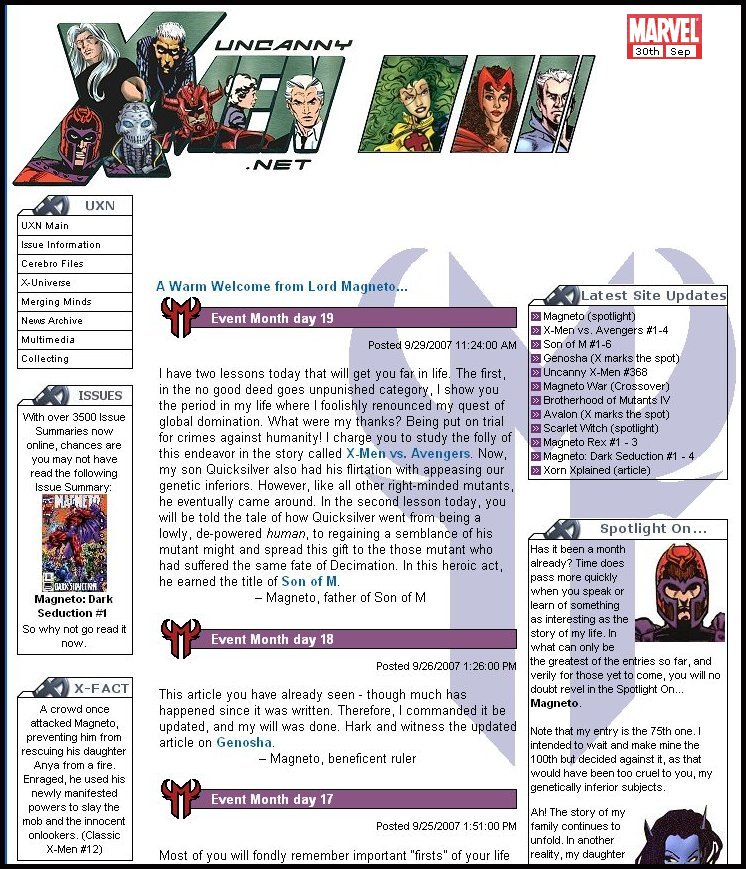 Likewise, during our Sentinel Fortnight, which was released in April 2008, we placed the hulking figure of a Sentinel in the background. We actually had to move it a little further to the right in order not of obscure some of the text of our features. While the House of M stamp had been a bit of fun, this image was downright creepy. To add to this, all Contributors in the Forum changed their headshots to images of Sentinels during the event. 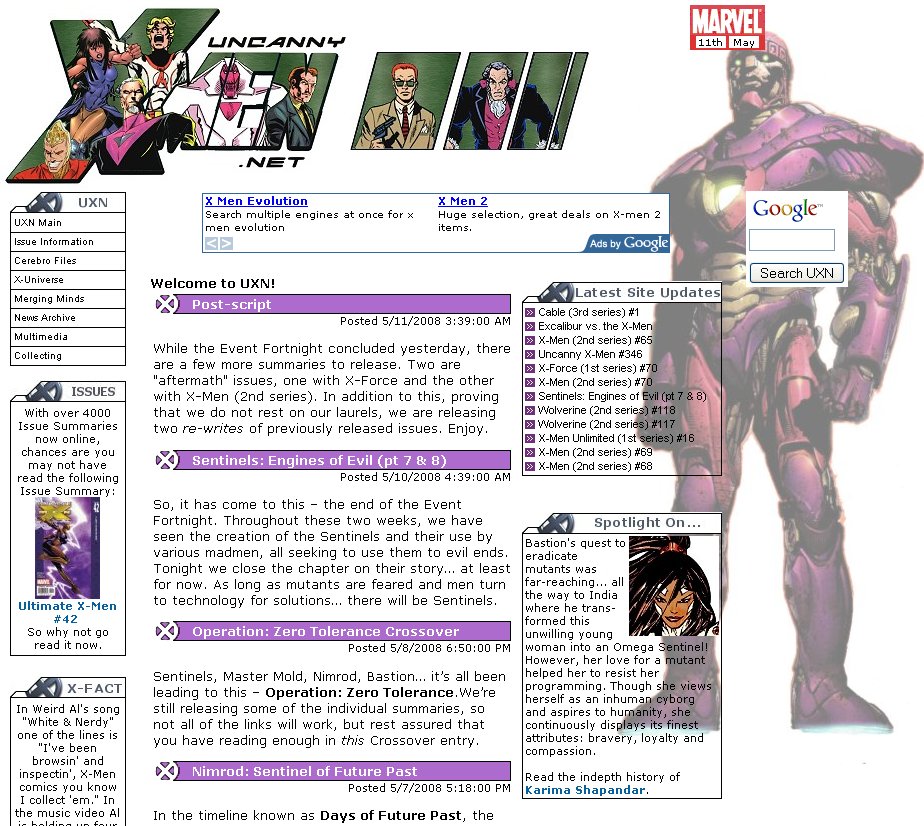 Though this is not technically as site feature, it is too good a compilation of images to let sit in the dark of a computer file folder somewhere. While we know that editors and writers at Marvel are aware of our existence and have used our site as a research resource, we would never fool ourselves into thinking that they visit our site regularly. So, to invite them to our event, we sent the following to a couple of people at Marvel. 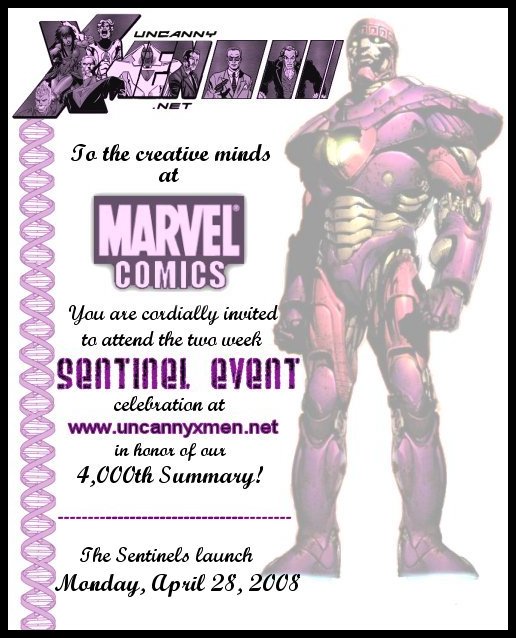 Not to be outdone by our own work with the ominous Sentinel backdrop during our Event Fortnight, an ever creepier backdrop was created for our Brood Week. 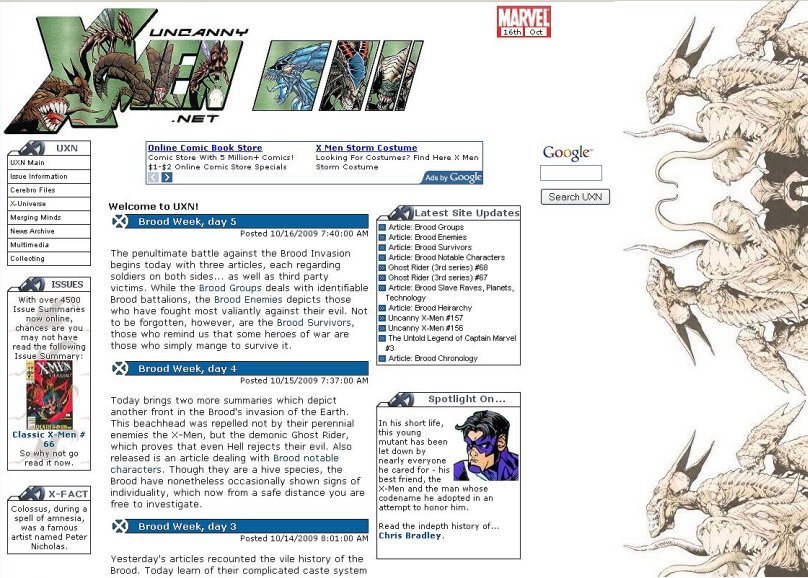 If you are interested in more details about our logos and their history, be sure to check out our article on the All-New, All-Different UXM.Net Logos