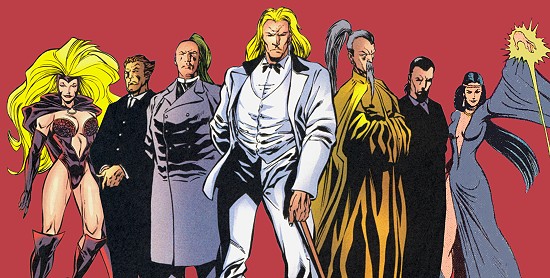 The rules regarding the Externals (or High Lords as they're sometimes called) are somewhat vague. Externals are mutants who possess a gift of immortality separate from their primary mutation. Each External's immortality is activated by their first death -- when they die a normal death, they are resurrected by their External power, and they will remain at the age they were when they first died forever.

Externals typically cannot die, but seem to possess an immortal healing factor rather than invulnerability. They suffer injuries just like any other person, and can even appear dead if mortally wounded, but will eventually restore themselves to life and health. Reports have indicated Externals can only truly die if their heart is removed, or if one severs "the five branches" (presumably meaning removing their limbs, followed by decapitation). These may have been misdirections, however, for the only rule that seems to truly matter is that an External can only be killed by another External.

Even when an External is killed this way, they can eventually come back in some manner. Some Externals have eventually restored their original bodies (although it might take longer if killed by another External). Meanwhile, Burke was reincarnated in an infant, and Candra resurrected as a ghostly entity, only able to assume physical form by draining lifeforce from others. Supposedly, the only way to permanently kill the Externals is for one External to kill every other External, seizing their power in order to become the final High Lord. If an External is successful in becoming the last surviving Externals, the others will reportedly remain dead forever.

Over a hundred years in the past, Candra infiltrated Apocalypse's base in Egypt and defeated his guardian and documenter Ozymandias. She was in pursuit of Celestial technology and other secrets En Sabah Nur had spirited away during his long life. With the help of a time-travelling Gambit, Sinister stopped her and handed her over to her fellow Externals. The High Lords had made a pact some time earlier to avoid En Sabah Nur at all cost, and they apparently planned to punish Candra for trying to violate that pact and risking them all. [Gambit (3rd series) #14]

Calling themselves High Lords, the Externals (Gideon, Saul, Nicodemus, Burke and Absolom) gathered at Nicodemus' place. They all felt the resurrection of Cannonball, signifying a new member of their clan. The others condemned Gideon for having recruited the wrong New Mutant, Sunspot. They also feared that Xavier's students would learn about their existence. Gideon came up with a plan to retrieve the new High Lord while keeping their hands relatively clean and their identities obscured. Gideon intended to assign the prodigal External named Crule to the task.  [X-Force (1st series) #10]

Gideon traveled to Madripoor and contacted Crule. Crule started a fight and Gideon proved to be Crule's match. Crule remarked that usually the other Externals avoided him, and only made contact if they wanted somebody killed. Gideon acknowledged that this time it was Cable they wanted dead. The Externals hoped to get to Cannonball once Cable was out of the way. When Gideon returned with Crule, Sunspot began asking questions. Gideon mimicked Crule's abilities to brutally beat Sunspot, taking out his frustration at having picked the wrong future High Lord on Roberto. [X-Force (1st series) #12]

Crule observed X-Force from afar as they were separated from their leaders and ran afoul of S.H.I.E.L.D. and Weapon P.R.I.M.E. With Cable gone, Crule believed he could easily retrieve or kill Cannonball and attacked X-Force in their shuttle. At a pause in the violence, Crule revealed that the Externals held Sunspot hostage, and Cannonball had Rictor blast Crule out of the ship. Gideon made contact with X-Force before they could hunt him down. In exchange for Sunspot's life, Cannonball had to promise to Gideon that he'd never interfere in matters concerning the Externals. Once the promise was made, Gideon directed X-Force to the research facility where Sunspot was being experimented on. [X-Force (1st series) #14-15]

Nicodemus fell ill with a strange illness, almost unprecedented among the Externals. In his final moments of convalescence, Nicodemus's plasma power exploded outwards and the ancient mutant died. Gideon was on hand for Nicodemus's death, and shaken by the implications. [X-Force (1st series) #20]

Saul captured three members of X-Force at their new base, rendering them unconscious with a single blast. He and Gideon threatened to kill them if Cannonball did not produce himself in exchange. The Externals believed that Cannonball's genetic structure might contain information explaining the death of Nicodemus. X-Force abducted Crule from a hospital where he was put after the fall from the IPAC shuttle, his whole body in a fiberglass cast. From him they learned the location of Saul's villa, then tossed him into the ocean (since his fiberglass cast would float). Saul and Gideon did not expect an attack and were caught completely off-guard by X-Force's strike team. Led by Sunspot, X-Force freed their teammates and left, dismissing the Externals as not worth their time. Cannonball stayed back at the headquarters and thus abided by the letter of his promise not to interfere. [X-Force (1st series) #21-24]

Candra resurfaced in the modern age. She was in contact with Gideon and also revealed to have been responsible for the formation of the Thieves and Assassins Guildes in New Orleans. Otherwise, though, she stayed out of direct interaction with the High Lords and their "boys' club." [Gambit (1st series) #1-4]

Saul, Absolom and Gideon approached Cannonball, not to fight but for help. In fact, they were scared of dying - Nicodemus and now Burke died of the Legacy virus and Absolom had already contracted it. They revealed that, just before dying, Burke foresaw that Cannonball would be involved in finding a cure. The Externals each stand for something in the "eternal puzzle." Nicodemus was wisdom, Burke fortitude, Saul provides patience, Crule ferocity, Absolom despair, Gideon opportunity, Candra and Selene add guile and corruption, and now Cannonball stands for hope. Cannonball was unable to provide the Externals with any direct assistance, but his optimism and fighting spirit helped quell the panic Gideon and the others were feeling. They parted peacefully, with a renewed determination not to succumb to Legacy. [X-Force (1st series) #36-37]

Months later, Sunspot and Caliban answered a distress call from Gideon's offices, but his dead body fell out of the building as they arrived. Absolom and Crule thought them responsible for the murder and started a fight. When the rest of X-Force came to the rescue, Warpath examined the apartment from which Gideon fell. There he discovered a crucified and drained Saul and the true culprit - Selene! After defeating Warpath easily, she joined the fight outside and killed Crule and Absolom. Selene laughed at X-Force for believing Cannonball to be an External, and suggested it was just a ploy by Cable. [X-Force (1st series) #52-54]

When Candra was killed by an unknown assailant, the other Externals telepathically felt her demise. Seeking safety in numbers, Nicodemus, Crule and Absolom sought out Selene and joined forces for mutual defense. When Cable and his X-Men allies came looking for Selene, they initially assumed he was responsible and attacked. The X-Men were not the killers, however, and so the two groups parted ways. The Externals were unable to stop further attacks from happening, and soon discovered the dead and discarded bodies of Saul in Tibet and Burke in Washington.

Gideon was revealed as the real killer, having returned from the far future to finish what Selene had started years earlier. Burke had been his secret ally, having grown tired of immortality and wanting Gideon to fulfill the prophecy and kill him for the final time. Burke's precognition had helped Gideon stay a step ahead of his pursuers and prey before he submitted to being killed himself. Absolom had also sided with Gideon, and surprised his fellow Externals by turning against them when Gideon arrived to attack the group as a whole. Selene escaped with her puppet Blink, but Nicodemus and Crule were killed and their powers consumed by Gideon.

Selene and Cable consolidated their forces as the endgame approached. Gideon was now incredibly powerful, filled with the strength of the murdered Externals. Selene warned Gideon that the power of the Externals was meant to be spread between them. It was too much power for any one being to contain, and that's why she stopped in her quest years earlier. Gideon rejected the idea, but Cable doubled down on Selene's statements, claiming his knowledge as a time traveler had shown this was not a major moment in history, meaning whatever Gideon achieved would be brief and a failure. Gideon was distracted long enough for Blink to form a teleportation portal around his head and close it, decapitating him. [Cable (1st series) #150-154]

Powers: Matrix-absorbing ability allowed him to adapt his genetic code to whatever foe he faced, duplicating the special abilities of mutants, metahumans, cybernetics, and armored adversaries.

Powers: Unspecified; Saul was both a mutant and a sorcerer, he showed himself capable of levitation and firing a stream of highly explosive laser fire and, theoretically, could transform into a giant dragon.

Fact: The temples and sons of Garbha-hsien played a role in Gambit (3rd series) #1, during a series of archeological digs.

Powers: Experienced precognitive flashes that allowed him to anticipate his opponent’s actions and filled his dreams with visions of future events or possibilities.

Powers: Superhuman strength, stamina, durability, and could extend shards of bone out through his flesh in the form of razor pointed spikes that could stretch to incredible lengths.

Weapons: clawed gloves; hair plaited into a whip, mace attached to the hair-whip

Powers: Superhuman strength, speed, endurance and reaction time, telepathy, telekinetic powers allowing her to create fire and manipulate the molecules of inanimate objects, can induce a momentary hypnotic trance in the minds of others, retains her youth and beauty consistently by draining the life energy from others; a partial absorption gives her a level of hypnotic control over her victims.

Powers: Releases thermochemical energy as a highly durable blast field around his body, using it for personal or group protection, focusing it into rocket thrust or bio-kinetic blasts, shaping the field around another person to imprison them, or absorb outside kinetic impact into his own field and discharge it as hyperforce punches or explosive shock waves upon impact

All Externals appearances: none

Powers: Metahuman strength, speed, endurance, reflexes, durability, can absorb outside sources of energy to increase his strength, teleport himself over vast distances, discharge massive amounts of raw plasma, omnimorphic molecular structure that allows him to assume any physical form, shape his limbs into weapons or devices, and alter his size and mass, and a techno-organic factor in his bloodstream, enabling vast regenerative potential.

Note: Selene mentioned only two Externals still alive in X-Force (1st series) #54, by then that would be herself and Candra. It seems that even though Apocalypse was always rumored to be an External, he was not. Looking through his history, (acquiring alien technology, usage of hibernation chambers, need of new host body at the end of the Twelve Saga) it seems pretty clear that he wasn't an External, because by definition they didn't die, and almost did not age.