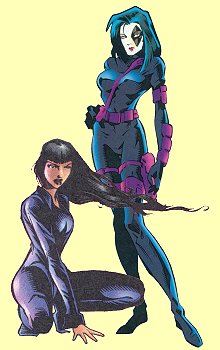 Powers: bio-electric current delivered through her body augments her natural agility and reflexes to peak human levels, and creates a probability field effect that alters the laws of chance so that events tend to fall into place for her

Facts:
- The Domino who joined the New Mutants / X-Force in New Mutants (1st series) #98 was actually the shapeshifter, Copycat. The real Domino was first seen in the Six Pack flashback of X-Force (1st series) #8 and as Tolliver's captive in X-Force(1st series) #11.
- Domino has used dozens of aliases in her career and her real name is not fully established. Neena Thurman seem to be the best guess, as she was married under that name to Milo Thurman. Beatrice is her most commonly used name.

Powers: create localized gravity fields to affect inorganic matter, placing a gravitronic charge within an object to compress it into a small, high-density mass and then maneuver that gravity charge to propel the object at high velocities