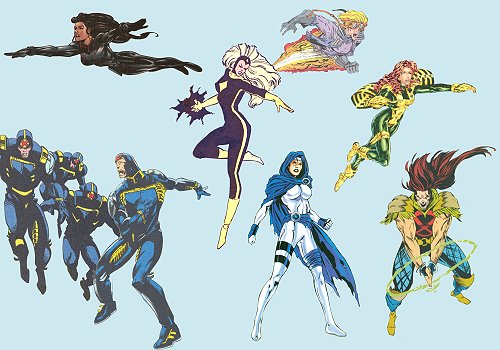 Powers: releases thermochemical energy as a highly durable blast field around his body, using it for personal or group protection, focusing it into rocket thrust or bio-kinetic blasts, shaping the field around another person to imprison them, or absorb outside kinetic impact into his own field and discharge it as hyperforce punches or explosive shock waves upon impact

Powers: Dark-Soul allows her to tap into an extra-dimensional source of Darkforce energy, which she can direct as concussive blasts, protective force fields, solid energy constructs, inter-dimensional flux that can propel her through the air, and can transport matter from place to place by creating portals through the Darkforce Dimension

Powers: superhuman strength, speed, agility, endurance, reflexes and hearing, telescopic and night vision sight, invulnerability to all forms of physical damage, hyper-intuitive thought processes, telepathic powers that can be used for psionic communication or to paralyze and mind-wipe others, self-propelled flight

Powers: manipulate her vocal chords to generate hypersonic frequencies that act as a high-decibel sonic scream to shatter or disintegrate solid matter, repels objects to shield herself or lift through the air, emit sonar pulses, and focus her sonics at another person to send them into a trance, paralyze them, or render them unconscious, compensates for her powers with superhuman hearing and a resistance to intense sound

Powers: utilize the kinetic energy released upon impact as a catalyst agent to initiate a complete and total replication of his body‘s cells, splitting off exact duplicates of himself with whom he shares an empathic link, operate independently, and can be absorbed back into himself later

Powers: generates waves of vibration out from his body to cause any nearby objects to shake, crumble, shatter or disintegrate, destabilize the ground beneath him to cause earth tremors, and focus his emissions into vibe-quakes, tightened seismic shockwaves with tremendous concussive force

Powers: empowered by a form of physical enhancement energy which amplifies her strength, speed, agility, endurance, reflexes, leaping ability, durability, and recuperative powers, and can be transferred at will to endow others with superhuman physical power for as long as she chooses; uses an anti-gravity cloak that enables her to fly and wrist-shooters which fire bursts of low-density plasma or paralyzing razor spikes