There's no Cable in Asgard 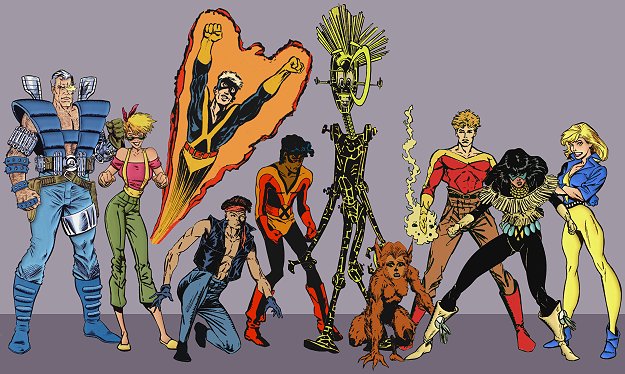 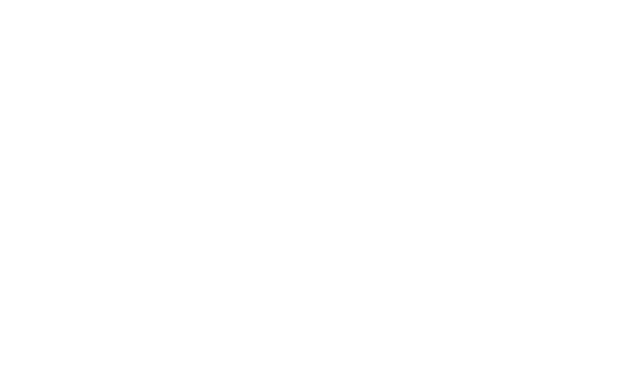 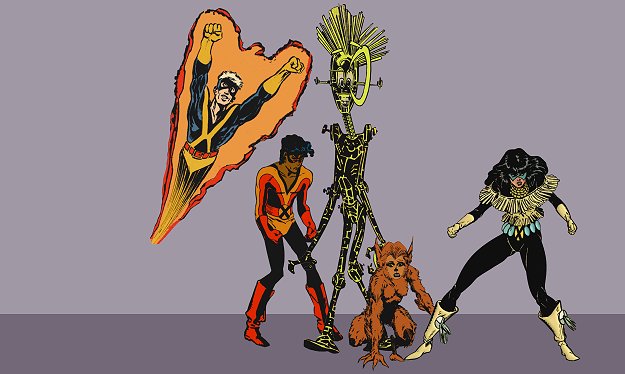 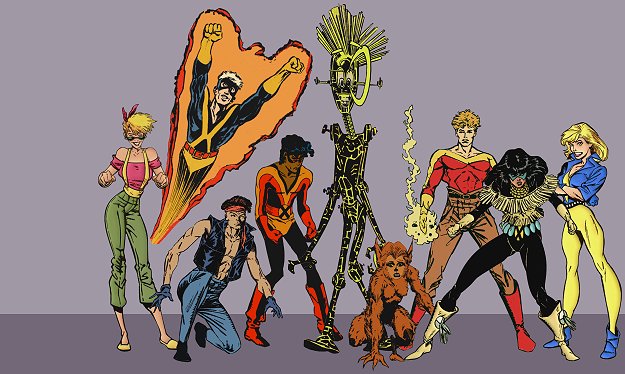 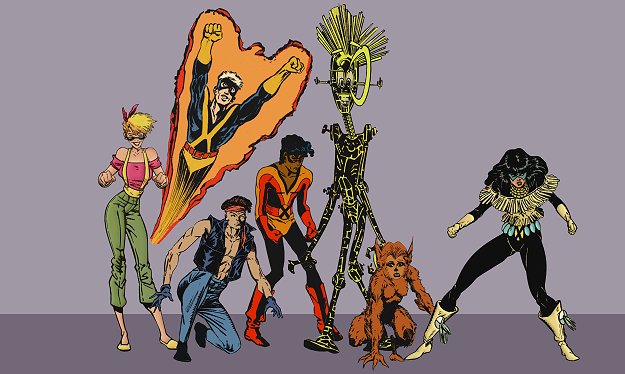 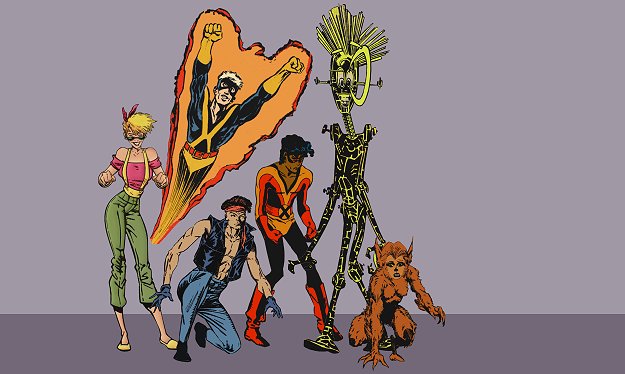 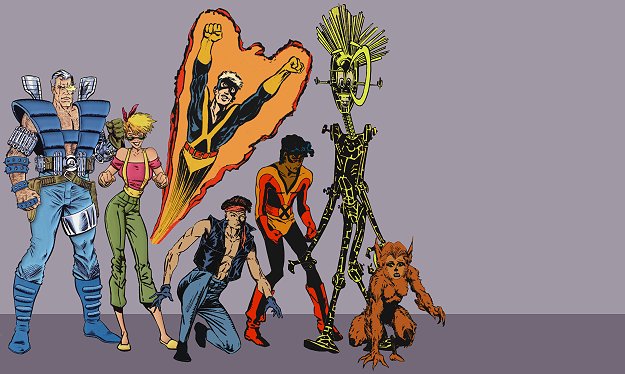 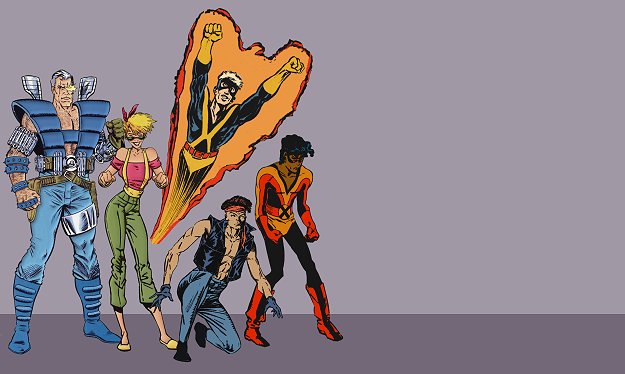 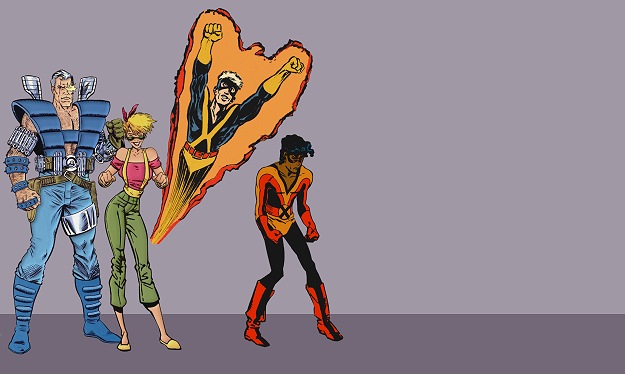 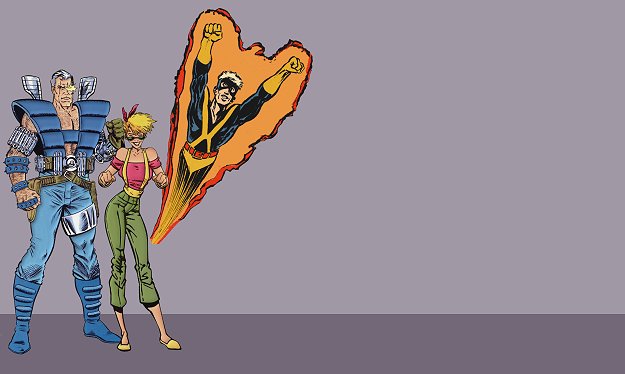 Having nobody else to turn to, the New Mutants traveled to X-Factor’s ship. They arrived just in time to aid the X-Terminators in a battle against a giant sea monster. Once the monster had been defeated, X-Factor allowed the New Mutants to stay aboard and had no objections to the two groups of teens merging into one, the “new” New Mutants. Ever the man-hunter, Boom-Boom set her attentions on her new team leader, Sam Guthrie aka Cannonball, and went out of her way to impress him with her time bombs. She was not as successful as she would have hoped, especially since Sam was just getting over the apparent death of his girlfriend, Lila Cheney. [New Mutants (1st series) #76, X-Factor (1st series) #41]

Mirage kept being plagued by a series of severe headaches and eventually she and her flying horse, Brightwind, burst into flame. Unknown to the New Mutants, the Asgardian Goddess of death, Hela, attempted to take over Asgard. In order to do so, she had infected Dani and the other Valkyrior with a mystical fever that transformed them into her own warriors of death. Hela wanted Mirage to go on a rampage and kill hundreds of humans, their souls then entering Hela’s realm and fueling her power. However, Dani’s will was stronger than the Asgardian death goddess had predicted and she fought of the demonic influence for as long as she could. She even created a giant ice machine to put herself in stasis, while the New Mutants went to Dr. Strange for help.

Unfortunately, at the same time they were also tracked down by Freedom Force with an arrest warrant for Rusty. The governmentally sanctioned team confronted the New Mutants on Liberty Island and, with Dani’s condition turning worse each passing minute, Skids made a dramatic decision. She told her teammates to leave and get X-Factor’s help, while she and Rusty would stay on the island, protected from Freedom Force by her force field. What she couldn’t have known at that point was that X-Factor were unavailable as they were in outer space, or that the New Mutants would get transported to Asgard by Dr. Strange, who realized that it was only a matter of time before Mirage would do Hela’s bidding. Eventually, Sally tired after several continuous hours of using her mutant powers and collapsed, enabling Freedom Force to arrest the two teenage mutants. [New Mutants (1st series) #77-78, 80, 82]

Upon arrival in Asgard, Mirage fully transformed into a demonic version of herself with red skin, fangs, furred claws and talons. Dani still was strong-willed enough to not attack her friends but, otherwise, was completely under Hela’s thrall. For Rictor and especially Boom-Boom, being surrounded by trolls, gods and other natives of the strange Norse realm was a lot to take in, but the senior members of the New Mutants decided to contact their allies, wolf-prince Hrimhari and the dwarf people for help. In doing so, they learned of Hela’s next ploy – annoyed that Mirage could not serve her on Earth, Hela had ordered her to Asgard’s master forger, Eitri, to force him into creating a weapon capable of slaying Asgard’s godfather, Odin. In death, Odin’s soul would belong to Hela, giving her power over all of Asgard.

The New Mutants’ attempted to warn the ruler of Asgard, but they got separated on their way out of the Valkyries’ fortress, Valhalla. Only Boom-Boom, Warlock and Hrimhari, made it out in time; the others got locked in when Hela magically sealed the place shut. Whereas the odd threesome didn’t manage to convince Odin’s guards of the gravity of the situation, they gathered many friends and allies from all over Asgard, so that by the time Hela launched her attack on Asgard, her minions were faced by an entire army. The possessed Moonstar still made it to Odin’s bedroom to kill him with the sword forged by Eitri, but Cannonball perfectly timed his flight pattern to be hit by the stroke meant for Odin. While Sam was protected by his blast field, the impact disrupted Hela’s enchantments and the Valkyries, including Dani, returned to normal. [New Mutants (1st series) #79-80, 82-86]

In the aftermath of this crisis, the New Mutants found a way to get back to Earth, though Dani chose to stay behind. She felt responsible for what had happened and wanted to help repairing the damages and restoring the Valkyrior’s reputation. Once they had returned to Earth, the New Mutants ran into a military man called Cable, who had escaped from custody after being apprehended by Freedom Force. In fact, he would've been recaptured if not for the intervention of the New Mutants. With the approval of X-Factor and one not easily convinced Moira MacTaggert, Cable assumed command of the New Mutants, as he needed help in hunting the Mutant Liberation Front, a mutant terrorist group led by his archenemy. This exact group having busted their former members, Rusty and Skids, out of prison, the New Mutants were eager to join Cable. [New Mutants (1st series) #87-89]

Around the same time, the rest of the team discovered that Rictor and Wolfsbane had grown pretty close. Whereas some of the others were genuinely concerned, Boom-Boom was rather jealous to not be the center of attention for once. Both Cable and the Mutants had developed problems with the government's mutant task force, Freedom Force, and so they moved out of X-Factor's Ship, as not to condemn their allies by their presence. They relocated to the sub-basement bunkers still running underneath the remains of Xavier’s mansion and began training extensively as Cable honed their minds and bodies like a drill instructor. As a result, the New Mutants began to adopt a more offensive mode of fighting, which among other things resulted in Cannonball gaining better control and exploring new avenues with his powers. While the others immediately took a liking to Cable, Rictor was very suspicious of the new leader,
believing he recognized him as the man responsible for his father's death years ago. [New Mutants (1st series) #90-94]

Much to the New Mutants’ chagrin, they soon had to share their limited space in Xavier’s underground base, as soon some of the X-Men reclaimed their old headquarters. Led by a de-aged Storm, who was now slightly younger than the New Mutants themselves and far less experienced in the use of her powers, the X-Men also brought some of their enemies along for the ride. [Uncanny X-Men Annual #14]

One day, the Genoshan government dispatched a strikeforce of Magistrates at the Xavier estate in retaliation for an earlier fight with the X-Men. Considered guilty of the same “crimes” by mere association, Wolfsbane, Rictor, Boom-Boom and Warlock were captured along Storm and teleported to Genosha where they were stripped of their powers and about to be subjected to the mutate bonding process. That process would have augmented their powers, yet turned them into mindless slaves of Genosha at the same time. To spare his friends that cruel fate, Warlock depleted nearly all his energies by disabling the energy field keeping them contained, allowing the New Mutants to escape. Too weak to flee himself, Warlock was strapped to a machine that was intended to transfer his techno-organic shapeshifting power to the fanatical mutant hater, Cameron Hodge. However, Wolfsbane had come back for her friend and, while she managed to prevent the transfer, she had to watch helplessly as the young alien perished before her eyes.

Cable and the remaining New Mutants joined the X-Men and X-Factor in a rescue mission to Genosha, but, by the time they arrived, Rahne had already undergone the mutate bonding process and now answered only to her new designation, Mutate 490. Even worse, the members of the rescue team all ended up captured by Cameron Hodge as well, and it seemed that they all would be executed as enemies of the state or serve for the rest of their lives as mutates. Fortunately, some high ranking Genoshan officials turned against the near insane Cameron Hodge, aiding the three X-teams into defeating him. The effects of the mutate bonding process being irreversible, Wolfsbane decided to stay on Genosha to ensure that the island nation’s new government would acknowledge mutants as equal citizens. The rest of the team returned home, where they scattered Warlock’s ashes on Cypher’s grave. [X-Tinction Agenda]

Now several members short, Cable was looking out for other mutants to fill the ranks of the team. However, most of the former New Mutants he considered either not useful enough in terms of power or too hard to reach. At least, he asked his former partner, a mercenary named Domino, to assist him into honing the New Mutants into the strikeforce he wanted it to be. Unfortunately, the lost even more members, as Rictor ran away at night to try and convince Wolfsbane to leave Genosha, and Sunspot was called away to take over the family business after the untimely death of his father. [New Mutants (1st series) #98-99]

Cannonball and Boom-Boom, the only two remaining members of the New Mutants, were unsure of the new teammates that Cable presented them with – Warpath, Feral and Shatterstar, who seemed far more ruthless and aggressive than the New Mutants of old. Boom-Boom and Cannonball made a promise to each other to follow Cable, but still try and uphold Professor Xavier's dream for peaceful co-existence in the process. What's more, the two of them also opened up about their feelings for each other and began seeing each other romantically. Cable decided it was time for a brand new start. Renaming themselves X-Force, the team left Xavier’s school to find a new base of operations. [New Mutants (1st series) #100]