X-MEN & AVENGERS: Outlaw Heroes vs. the Earth’s Mightiest : Page 3 of 5

Many months later, to their surprise, Captain America and the Wasp ran across the very much alive Storm, when the Avengers raided the stronghold of the Deviant madman, Ghaur, who had captured seven super-power females to serve as brides for Set. Though they easily defeated the brainwashed Storm, the duo of Avengers had no time to verify her identity. Nevertheless, it seems that they had no interest in pursuing the matter after the crisis was over. Perhaps they felt that, if the X-Men were alive and wished to remain hidden, it was none of their concern. [Avengers West Coast Annual #4, Atlantis Attacks]

Magneto, however, remained unaware that the X-Men had not perished. Further, after his wards, the New Mutants, repeatedly left the school grounds on personal missions for extended periods of time, Magneto eventually gave up on his association with what remained of the X-Men’s organization. Over the next several months, he returned to a quieter and more subdued version of his former life, eschewing contact with humans and mutants alike. Even when the X-Men resurfaced, he did not entertain the idea of returning to their fold. He further completed his cycle of returning to villainy when he was drawn back into action by a group of mutants pledging themselves to his service, calling themselves his Acolytes. This decision was a devastating one for him, as it ultimately led to the destruction of Magneto’s orbital base, Asteroid M, and his apparent death. [X-Men (2nd series) #3]

No matter their strained relationship with the Avengers as a result of their association with Magneto, the X-Men felt it their duty when, soon thereafter, they learned that not only had the fanatical Acolytes survived, but that they were interested in the elimination of Magneto’s human granddaughter, Luna. Since Luna’s mother, Crystal, was now an Avenger, Xavier called a meeting of the X-Men, Avengers and the government team of X-Factor, who counted Quicksilver among their ranks. [Avengers (1st series) #350] 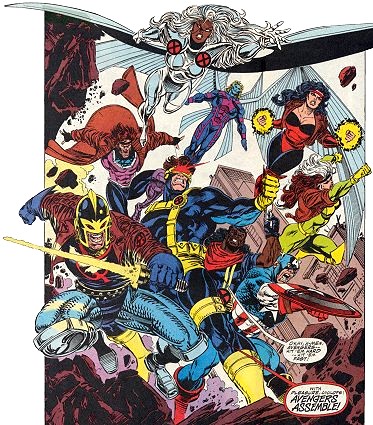 Some weeks later, Xavier’s warning would prove prophetic, as the most power hungry of the Acolytes, Fabian Cortez, would kidnap Luna and take her to the island nation of Genosha, currently in the grips of a civil war. Independently, the X-Men and Avengers traveled to Genosha but, once met, both decided to join forces to quell the conflict and stop Fabian Cortez and his Genoshan mutates. Cortez, however, was felled by Exodus, who himself claimed to be the heir of Magneto. Immediately and without hesitation, the X-Men and Avenges joined forces and together managed to repel Exodus, who fell back to the safety of the Acolytes’ space station, Avalon. Having fought side-by-side once again, there was no question the two teams were allies. [Bloodties crossover]

Many months later, the lingering mystery of who was to be a traitor to the X-Men, a question prompted by knowledge brought from the future by the time-traveling Bishop, was solved. Professor Xavier himself, founder of the X-Men, had developed a different personality called Onslaught, as a result of having absorbed the hatred, ego and nightmares of Magneto months before. [X-Men (2nd series) #25] Added to Xavier’s own telepathic might was energy stolen from the Juggernaut’s crimson gem of Cyttorak and the reality-altering powers of Franklin Richards. The conflict this chain of events would produce would not cause problems between the two teams, but would result in a shock that would raise tensions and distrust from humans towards mutants to new heights. 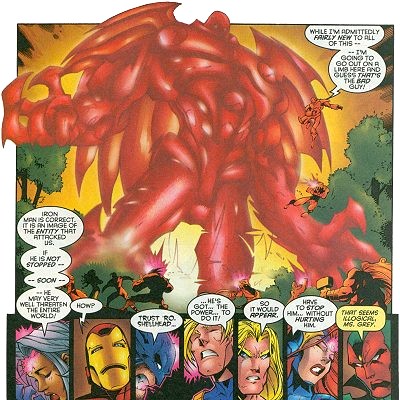 While Onslaught had been taunting the X-Men for weeks, the Avengers were brought into the mystery that was Onslaught when they responded to a request for help by the mutant known as Threnody and her boyfriend, the dimensional refugee Nate Grey, another person of interest to Onslaught. When the Avengers arrived at the Xavier Institute, they were attacked by the X-Men, who had recently been defeated by Onslaught and believed the Avengers to be more illusions from their foe. Eventually, reason prevailed and the two teams adjourned to discuss battle strategy against their common enemy.

In short order, the heroes’ conflict against Onslaught led to the villain constructing a citadel out of psionic energy in Central Park in Manhattan. While the heroes managed to separate Xavier’s physical being from Onslaught, who had evolved to the point where it could exist as a separate entity, the villain had also captured Nate Grey. Probing the youth’s mind, Onslaught had learned of the altered reality called the Age of Apocalypse and witnessed that rule by mutant was no more just than that of humans. Deciding that neither deserved to exist, Onslaught was determined to eliminate both. 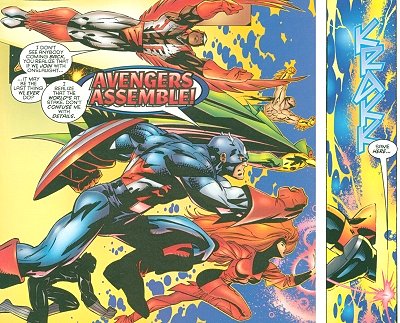 Meanwhile, the X-Men and Avengers had come to realize the nature of Onslaught’s being and that, to defeat him, they needed a physical vessel to contain Onslaught’s psychic essence. As they likewise realized that, due to his mutant nature, other mutants - namely the X-Men - could not participate, it was the Avengers, as well as the Fantastic Four, who rushed into Onslaught’s psychic mass. Once bonded, the X-Men were able to attack Onslaught, obliterating him. [Onslaught crossover]

Though they won the day, the X-Men’s victory was Pyrrhic, as not only had they had to sacrifice their friends and allies, but they were to be blamed for it. It is interesting to note that, several years before, the X-Men had made the same sacrifice as the Avengers, giving their lives to save the world watching through television cameras. However, when the X-Men had supposedly died, their sacrifice had been unappreciated, while now the public not only mourned the Avengers and Fantastic Four as the ultimate heroes, they blamed their deaths on the X-Men as much as Onslaught, the foe they had together tried to defeat. The world had lost its two most trusted and beloved groups of heroes, while those most closely associated with the cause of the problem - mutants - had survived.

Like with the death of the X-Men, eventually it was discovered that the Avengers and Fantastic Four had not perished. Instead, they had been saved by the subconscious powers of Franklin Richards. Months later, the two teams returned, though the hatred of the public for the X-Men and mutants remained.

Several months after the Avengers’ return, a threat initiated by the alien Kree would bring the two teams together to again fight a common foe. In a complex plot, the Kree Supreme Intelligence had, behind the scenes, convinced the intergalactic council that the super-powered inhabitants of Earth represented an intergalactic threat and deserved quarantine. Further, the council decided to use the now quarantined world as a prison planet, where galactic criminals would be exiled. The sudden and unexplained appearance of alien criminals took heroes around the world by surprise, and each responded to and investigated the situation on their own. However, when eventually brought together by the US Agent, who now led the government-sponsored organization S.T.A.R.S., the X-Men and Avengers invaded the space station which generated the force field surrounding the Earth. There, they combated and defeated the culprits behind the scheme, the alien Ruul, evolved Kree who still served the Supreme Intelligence. The deception of the Ruul exposed, the intergalactic council suspended the quarantine. [Maximum Security crossover] 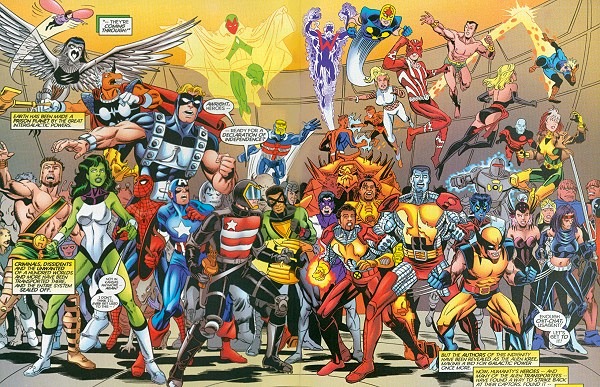