X-MEN & AVENGERS: Outlaw Heroes vs. the Earth’s Mightiest : Page 5 of 5

Though the exploits of the X-Men and Avengers have intersected many times as two groups of heroes, so too have the lives of the respective teams’ members. While both teams are institutions themselves, comprised of rotating rosters, the individuals that comprise the team have lives and opinions of their own. Over the years, there have been several heroes who have straddled the fine line of being allies to both. This page is meant to provide a brief overview of these heroes.

The only other hero to have been a member of both the X-Men and the Avengers is Wolverine, however, unlike the Beast he served both teams parallel. After a chance team-up with the group that would comprise the reconstituted Avengers, Wolverine was offered membership by Tony Stark in New Avengers #6, mainly because of willingness to do what the other members could and would not. However, Logan’s membership ended only a few weeks later when the team fell apart because of the super-hero Civil War. Nevertheless, Wolverine remained a “new” Avenger, as he joined a rogue unit led by Luke Cage, which continues to resist the Registration Act and the “official” Avengers that enforce it.

The mutant twins, Quicksilver and the Scarlet Witch were offered to join the X-Men several times; in Professor Xavier & the X-Men #4, shortly before they were recruited by Magneto for his Brotherhood of Evil Mutants, in X-Men (1st series) #11 right after the Brotherhood was disbanded, and later on, in X-Men (1st series) #27, by when they were already full-fledged Avengers. Each time, Pietro quickly turned down the offer for both of them, whereas Wanda would at least have put it into consideration. However, back in the day, she would always act according to his wishes.

Even though he had no interest to become an X-Man, Quicksilver wound up being the next best thing when he became involved with the governmentally sponsored X-Factor. Initially seeking their aid in X-Factor (1st series) #71 as his powers were acting up, Pietro soon joined the group that consisted of two former X-Men and some of their allies. When he eventually quit the team in X-Factor (1st series) #95 and returned to the Avengers, it had nothing to do with Pietro choosing the one group over the other; it was a desperate attempt to reconcile with his estranged wife, Crystal.

Carol began to hang out with the X-Men in Avengers Annual #10, following the loss her powers as Ms. Marvel. When the X-Men were captured by the alien Brood, Carol was among them, and in Uncanny X-Men #163 the aliens tampered with Carol’s genetic make-up, trying to unlock the full potential of her hybrid human/Kree DNA. This was the birth of Binary, who proved vital in the Brood’s defeat, prompting the X-Men to offer Carol to join them. However, as described above, with Rogue seeking sanctuary and also happening to join, Carol rejected that offer and instead ventured into space in Uncanny X-Men #171 & 174. Several years later, she came back to Earth and made up with Rogue. Since then, she has not only rejoined the Avengers, but is currently their leader.

At one point, when the Avengers were about to cut down their line-up to a manageable size, Moondragon decided that her former allies were too unorganized to decide for themselves who should be included or left out. In Avengers (1st series) #211, she mentally influenced nearly a dozen super-heroes into coming to Avengers mansion, among them Iceman and Angel, and made them demonstrate their powers to determine their usefulness.

Eventually, though, the Avengers realized what was going on and ended Moodragon’s scheme. Like most of the other summoned heroes, Angel and Iceman left again. Whereas Bobby had nothing else in mind but to finish his college education, Warren was unsure if he was making the right decision. Even though he never thought of becoming an Avenger before, he found the idea to be quite interesting.

Dazzler too was among the crowd gathered by Moondragon, and she soon would get a second chance to join the Avengers, this time being personally invited by the Wasp in Avengers (1st series) #221. Looking for some new members, the Wasp wanted to include at least one other female Avenger, which is why she approached several super-heroines, including Dazzler. However, at this point in her life, Alison was still pursuing a career in the music business and had no interest to join a team of superheroes. For the same reason she earlier had also turned down membership in the X-Men as well, although circumstances would eventually force her to change her opinion on that. 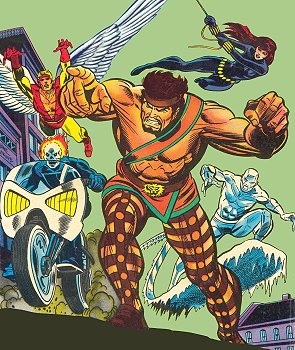 While there have been several heroes who have either been members of or offered membership to both teams, it is interesting to note that some members of both teams have joined forces on separate projects, forming new teams instead.

One such team was the short-lived west coast team known as the Champions. Initially intending to leave super-heroics behind while they pursued higher education at UCLA, former X-Men Iceman and Angel found themselves back to back with former Avengers, Hercules and the Black Widow, against a host of Olympian gods. Joined by the Ghost Rider, they banded together to form the Champions. Though the team was short-lived, it did represent the first attempt at a super-hero team to be headquartered on the west coast of the United States, as well as the first hybrid organization between members of the X-Men and Avengers. 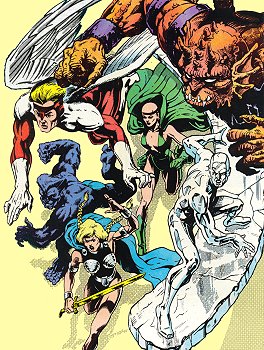 Whereas the Champions were founded by former X-Men and Avengers, the Defenders had already been in existence for quite some time when the Beast joined their ranks. Initially coming to Doctor Strange for help, the Beast stayed and later vied for the leadership position. When he first joined, the Beast met a common face in Patsy Walker, then known by her nom de guerre of Hellcat. Later, when she left the Defenders, Beast was joined by his former teammates with the X-Men, the Angel and Iceman, the Champions having recently disbanded. Also joining the group was yet another former Avenger associate with whom the Beast had served, Moondragon, who like Hellcat had never been a full Avenger herself but had worked with the Beast during his time as a member. Together, along with Gargoyle and the Valkyrie, they composed the “new” Defenders. 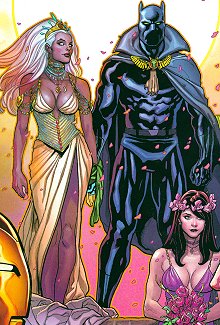 Another, quite different “joint venture” of X-Men and Avengers would be the wedding of two of their members. Knowing each other since they were teenagers, Storm and the Black Panther finally got married. Her being a mainstay and former leader of the X-Men, and him having earned the trust and respect of the Avengers during the few times his duties allowed him to be part of the team, T’Challa and Ororo have become quite the power couple of the Marvel Universe, not in the least because of Wakanda’s economic might backing them up.