X-MEN & AVENGERS: Outlaw Heroes vs. the Earth’s Mightiest : Page 4 of 5

Over the years, the X-Men and Avengers had experienced moments of distrust, though for the most part they viewed each other as allies. They shared information and fought side-by-side. In one such example, shortly after the revelation that the Scarlet Witch had gone insane and lost control of her reality-altering powers, both teams sat down to make the most important of decisions: what to do with Wanda Maximoff. 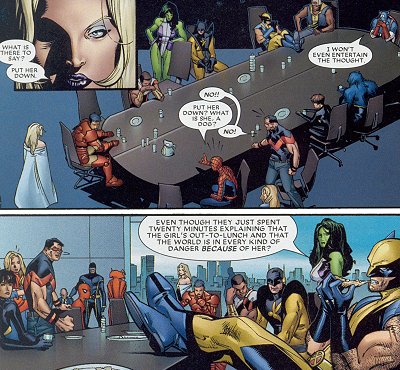 When Magneto brought Wanda to Genosha for recuperation, Charles Xavier, who was also living in Genosha, learned what had happened and decided that the matter was too important to leave to the two of them. Returning to New York, Xavier called a meeting of both the Avengers and X-Men to discuss the matter. It is unclear what decision was reached by the assemblage, as when the two teams traveled to Genosha to confront her, the Scarlet Witch used her reality-altering powers as never before, creating a new reality where mutants were the dominant species and the world was ruled by Magneto’s royal “House of M.” Eventually, when reality was restored, the Scarlet Witch was nowhere to be found, thus tabling once again the problem she represented. [House of M #1-8]

Though their mutual decision regarding Wanda was no longer at hand, the two teams did immediately decide upon a conspiracy of sorts. In restoration of reality, the Scarlet Witch had made a massive change, drastically reducing the number of mutant in the world from a 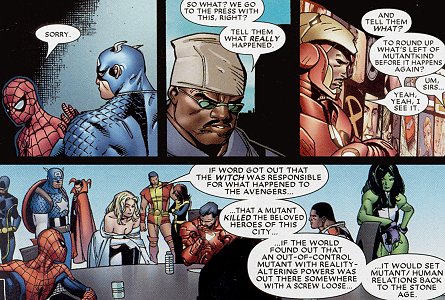 population numbering in millions, to perhaps barely a few hundred. While the governments and population of the world puzzled at this sudden occurrence, dubbed “M-Day,” the X-Men and Avengers knew better. What’s more, they decided among themselves that the knowledge of the true events would remain among themselves and be denied to the rest of the world. Should the governments and people of the planet learn that a single mutant had the ability to reshape the world in an instant, the remaining mutants alive would be slaughtered in the name of mankind’s survival.

Despite this almost resolve on the part of the Avengers toward mutants, they did not deign to interfere when the US government, claiming to be acting altruistically toward the country’s nearly extinct mutant population, surrounded the Xavier Institute with towering Sentinels. Designated Sentinel Squad O*N*E, these government agents announced that they were being posted to protect the mutants who remained from outside forces. Regretfully, they then stated, the mutants therein would not be allowed to leave - for their own safety. Thus, in the name of protection, the Xavier Institute was turned into a de facto mutant ghetto. [Decimation: House of M - the Day After, X-Men: the 198 #1-5]

It might be the result of the Avengers’ lack of action towards this undeniable injustice that the X-Men decided to remain neutral during the conflict that erupted soon after, dubbed by the media as the super-heroes’ Civil War. When a group of heroes called the New Warriors moved to capture a group of fugitive super-villains as part of their reality show, one among the villains, the explosive Nitro, detonated himself, destroying a large portion of the town of Stamford, CT and killing over 600 people in the process. An enraged nation demanded action and the US Congress quickly delivered with a Registration Act, demanding that all super-powered and costumed adventurers register with the government or be branded outlaws. [Civil War #1]

A number of heroes led by Captain America refused to comply, resulting in those following the law, led by Iron Man, to hunt them down. The resulting Civil War pitted hero against hero, leading to death, 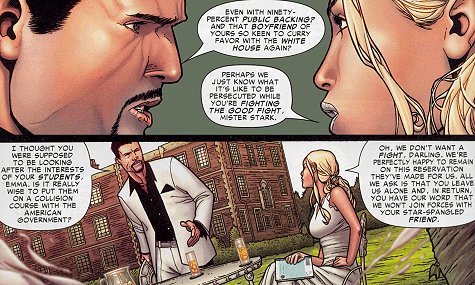 destruction and wounded relationships that might never heal. While the battles raged between both sides, the X-Men stayed neutral. Having already been registered by Sentinel Squad O*N*E, the X-Men were already in compliance. As long as they did not interfere with the pro-registration forces, they - for once - were not considered outlaws by the US government. [Civil War #3]

This is not to say that not all of those affiliated with the X-Men remained neutral. Wolverine had been doubling as an Avenger for some months before the incident at Stamford. When sides were being drawn, Wolverine joined forces with Captain America’s group. Meanwhile, on the other side, Bishop eagerly enlisted with the pro-registration forces and, with his law enforcement background, was given a position of authority. Though not exactly affiliated with any of the X-groups, the mercenary known as Deadpool accepted employment in hunting down Captain American’s followers. [Civil War #2-7, Civil War: X-Men #1-4, Cable & Deadpool #30-32]

Ultimately, the Civil War ended when Captain America called for his forces to stand down. In a climactic confrontation in Times Square, with his forces on the verge of besting Iron Man’s, Cap realized that his side had lost the support of the populace that they were trying to protect. Seeing any further conflict as a betrayal of the trust that he had already lost, Captain America surrendered and was arrested. In an attempt at reconciliation, the rest of Cap’s forces were granted amnesty, as long as they registered. Nevertheless, a few hold out heroes, including Wolverine, refused to capitulate and continued their status as outlaw heroes.

As stated before, it is unclear exactly why the X-Men never received the same accolades as the Avengers, despite their track record at saving the world matching that of the Avengers. It is clear that their being mutants is not the whole answer, as the Beast, Quicksilver and the Scarlet Witch were all celebrated members of Earth’s Mightiest Heroes. If this is not the reason, then why should the heroic of one team be more valued than the other? Perhaps the answer lay not in what they do - protecting the world - so much as in the motives behind the actions.

As super-heroes, the Avengers are not attempting to change the world. Far from it, by coming to the rescue when the average citizenry (whether on a global, national, city-wide or even personal level) is threatened, the Avengers are de facto champions of the status quo. It is not their sworn duty to make the world a better place, but protect the world from threats both external and internal which endanger the populace’s ability to decide their own fate. Rather than acting like gods among men, shepherding the direction of humanity, they instead ensure that humanity decides its own fate.

Meanwhile, the X-Men’s goals are two-fold. First, it is to provide a haven for those young mutants who wish to learn to use their powers wisely, ensuring that they will not become “evil” mutants. The second imperative of the X-Men is to protect humanity from those “evil” mutants who threaten its existence.

While both of these motives are indeed altruistic, averting potential, future threats and ending current ones, the X-Men’s actions are as much of self-interest. Evil mutants not only endanger humanity but, if unsuccessful in their plans, provoke the fists of retribution upon the rest of the law abiding mutantkind. Further, rather than being champions of the status quo, the X-Men fight for a future where their kind are not only accepted, but treated as equals, despite their superior abilities. Perhaps it is this juxtaposition which allows the public to adore the Avengers, while decrying the X-Men.

Still, the situation is not without hope. If the Avengers are represented as the champions of humanity’s status quo, then it is hopeful that the opinions of the Avengers might ultimately be reflected in the humanity that they protect. If that is the case, then the future of the X-Men’s survival is inevitable. Throughout their relationship, the Avengers have always given the X-Men the benefit of the doubt and have stood shoulder to shoulder with them as allies. Times of distrust and animosity are brief, followed by reconciliation and renewed partnership. If this is the case between the two groups, for now and evermore, then perhaps the same can one day be true of the Avenger’s humanity and the X-Men’s mutantkind. One can only hope.