A mysterious, armored figure called Harness travels around the globe, abusing a young mutant named Piecemeal, forcing him to absorb some ambient energy form. The New Mutants, now called X-Force, get involved, just like the New Warriors, and soon the groups discover that both A.I.M. and the Genetech Corporation are linked to Harness‘ mission, which turns out to be the recreation of the mutant horror known as Proteus. Naturally, the heroes contact Moira MacTaggert and her Muir Islanders, but things only get worse, as the tortured psyche of Piecemeal merges with Proteus and they literally become one being. The heroes are left with the question whether they should try to reason with the dangerous and near all-mighty Proteus, or try to kill him a second time. Even with X-Factor on their side, it remains to be seen if they can prevent global destruction. And who are the real masterminds behind this entire madness?

On the grounds of St. Simons Academy in Vermont, the Alliance of Evil swiftly crushes the security, allowing an abused child known as Piecemeal and his keeper, Harness, to walk in and absorb a large amount of ambient energy, which seems unrelated to the students. Wiz Kid, Artie and Leech try to stop them unsuccessfully and are injured in the process. The New Mutants, now calling themselves X-Force, arrive - only after the Alliance has departed. They then devise a plan to counterstrike against the Alliance and find out why they are moving along the East Coast crushing everything in their path, for a seemingly random scientific mission. Eventually, X-Force finds the Alliance near Niagara Falls and soundly beats them, but Harness and Piecemeal escape again after absorbing another load of ambient energy. The IDIC Corporation, a phony company that is a front for Advanced Idea Mechanics (A.I.M.) is Harness‘ employer, but when Cable and X-Force interrogate the fallen Alliance members, they point them to Genetech, a rival company performing experiments on “cellular reconstruction.“

Once the mutants make their way into the inner sanctum of the Genetech HQ, they are stopped by the New Warriors. The two hero teams fight, unaware that they have been set up. After the director of Genetech's program halts their battle before it can turn deadly, they decide to join forces. A second interrogation of the Alliance reveals the IDIC Corporation (or actually A.I.M.) as their true employer, likewise they discover that the energy matrix that Harness and Piecemeal have been collecting is identical to the DNA helix that Genetech has been cultivating – evidently both companies are working on the same project. 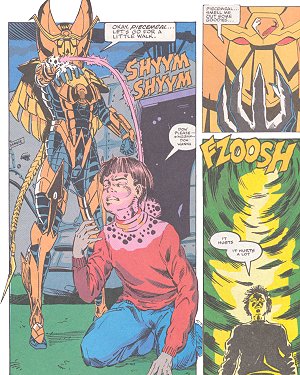 In order to cross-reference all of the information they have, X-Force and the New Warriors enter the underground complex beneath the ruins of Xavier’s mansion and use Cerebro to cross-reference their data. In horror, they learn that the DNA helix A.I.M. is attempting to resurrect is the one of Proteus – late son of Moira MacTaggert and one of the most dangerous mutants in history.

Meanwhile, Harness continues beating Piecemeal and forces him to “eat“ ambient energy in locations all around the globe, and the young boy begins to get extremely fat as a result of the experience. Piecemeal cries and begs for his ordeal to end, but to no avail, as Harness only threatens his life and orders him to do comply. They only have one last stop to make – in Edinburgh, where Proteus‘ energy form originally dissipated.

X-Force and the New Warriors race to Muir Island, but none of their attempts to contact the residents are answered. Unknown to them, the Shadow King is controlling Moira MacTaggert and the mutants currently living at Muir, and he prefers some privacy. However, as X-Force and the New Warriors fight their way through the island’s defense systems and clearly outnumber the residents, he has no choice but to loosen his control somewhat. After being filled in on what Harness and Piecemeal are up to, Moira reveals that she discovered a long time ago that Proteus‘ cellular structure might have the ability to replicate itself. Quickly, plans are made how to deal with the situation. 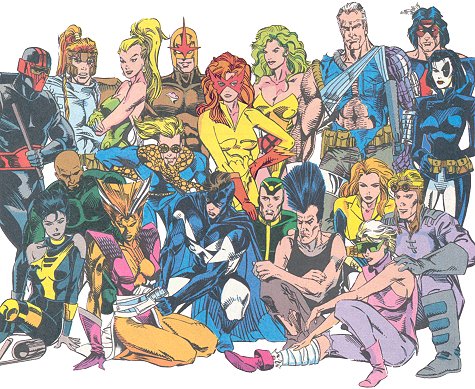 Accompanied by the Muir Islanders, X-Force and the New Warriors head to Edinburgh, where the remnant Proteus energies are flowing into Piecemeal by themselves – he doesn’t even have to search for them anymore. The heroes split up, most of try to keep Harness busy, while the rest of them (Moira, Legion, Marvel Boy, Multiple Man, Firestar and Speedball) combine their powers in order to drain Piecemeal of his absorbed energies. While they are partially successful, the boy is still absorbing the energies faster than they can leech them off. Meanwhile, during the battle, Harness‘ armor cracks open – revealing its wearer to be a woman – Piecemeal’s mother. Before the heroes can even deal with this shock, the glowing mass of flesh once known as Piecemeal ruptures, and Proteus is reborn as an amalgamation of Gilbert Benson (Piecemeal) and Kevin MacTaggert. The new Proteus bids his two mothers goodbye, and blows up the city.

Some hours later, X-Factor too arrives in the city, which has been transformed into a series of geometrical figures, vaguely resembling people and places. At the heart of the matter, X-Factor finds Proteus and his two mothers beside him. The five mutants attack, but find their attempt to disable him futile, as Proteus easily dispatches each member. Beast learns the hard way that even Proteus is no longer allergic to metal, as Proteus beats Hank for trying to hit him with steel gauntlets. As they are defeated, the team is transported telepathically into Proteus’ mind, where they experience absolute nothingness. However, they find X-Force, the New Warriors and the Muir Island team also entrapped within the realm of Proteus' mind, and determine that Proteus wants them all to experience what he has for years - peaceful nothingness.

An ethical debate starts among the assembled heroes about what to do with Proteus. They come up with two different approaches – either give him the option to spend his life in a biomechanical shell, which would allow him to maintain his sentience and powers, or to convince him to commit suicide. 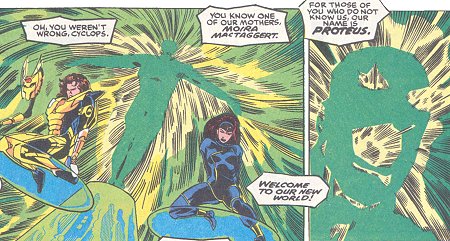 Surprisingly, Cable is one of those who propose Proteus being given another chance at life. While the heroes argue with Proteus about his choice, he looks up to the opinions of his two mothers. Harness accuses him of having been a constant pain and wants him dead, and - under the Shadow King’s influence - Moira too says she can’t find it within her to care for him again. Isolation and pain having been the sole companions of Gilbert and Kevin’s lives, Proteus decides that he doesn’t want it to continue and his energy form dissipates once more. Cable declares Cyclops a failure for his role in the event, and walks away without further discussion. 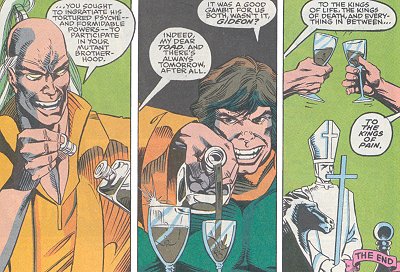 Elsewhere, the Toad and Gideon end a game of chess they have been playing all day. Actually, the two of them are the people responsible, for they had hired Genetech and A.I.M. to resurrect Proteus. While Gideon had hoped to use his powers to control the world’s finances, the Toad needed more manpower for his new Brotherhood of Evil Mutants. Hidden from the conflicts of the heroes, the two men toast their status as the Kings of Pain.