GUARDIANS OF THE GALAXY: Page 2 of 4

It is not known what event caused the divergent reality of Earth 691, but even by the end of the 20th century it seems to have been a very different place compared to the main Marvel universe. Apparently, the inhabitants of Earth didn’t bother about pollution until it was too late and the planet’s ozone layer was seriously damaged, causing a skin cancer epidemic in 1982. Even though everyone had to wear protective sun-suits in public to block out the deadly ultraviolet rays, the cancer rate soared and bionic implants were invented to replace infected and amputated body parts. Dwindling food supplies sent the planet into further turmoil.

The United States’ space program ended with a bang. The last funding was used to send a man on a thousand year long journey to the stars. [Defenders (1st series) #26] That man was Vance Astro. As he was 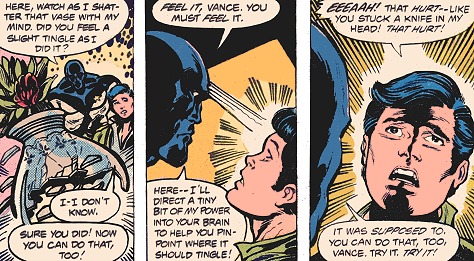 placed in suspended animation for the duration of the flight, he had no idea what transpired on Earth in his absence. Within the person of Vance Astro, though, one significant divergence to the main reality can be found. Vance Astro never knew that he was a mutant. By the time he had finished his NASA training and became an astronaut, he hadn’t manifested his mutant powers yet. Much later, when he was already a member of the Guardians of Galaxy and they had traveled to the present era of the main reality, Vance sought out his younger self and activated his mutant power to make sure that the teenage boy would not share the same fate. [Marvel Two-In-One (1st series) #69]

In the years after Vance’s shuttle had been launched, mutant paranoia ran rampant on Earth 691. An army of upgraded Sentinels was built and they ravaged the genetically different population. Many superheroes and villains fell victim to the mutant-hunting robots. Magneto gathered the surviving mutants and proposed the idea to leave their hostile planet and seek sanctuary among the stars. Most mutants were weary from the war and willingly accepted, while others did so only reluctantly.

The few mutants who decided to stay on Earth, convinced that their situation was still negotiable, soon met their end. While Namor eventually managed to defeat the Sentinel army, it was not much later that the Martian invasion occurred during which nearly the planet’s entire superhuman population was killed. Some few, such as Dr. Strange or the Vision, fled Earth as soon as they realized that the battle was lost. 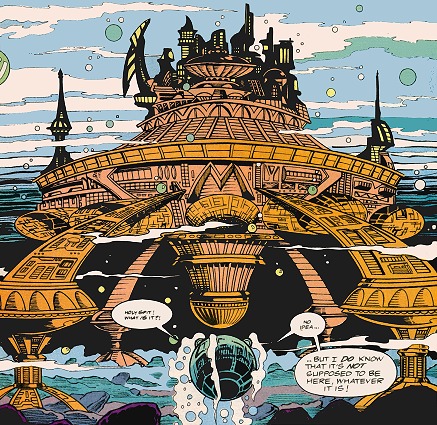 Unaware of the events on Earth, Magneto and a few hundred mutants had made their way to the Jupiter moon, Europa, where they build a city beneath the magnetic north pole. There, they were constructing three spaceships, with which they intended to explore the galaxy in search of a safe haven. However, Apocalypse followed them to Europa, intent to enslave the remaining mutants. Magneto ordered his followers to board the two spaceships that had been finished while he covered for their escape and engaged Apocalypse in a ferocious battle that took both their lives. In the 31st century, the Guardians of Galaxy would eventually stumble upon the remains of the mutant city on Europa and temporarily use it as their base. [Galactic Guardians #1, Guardians of the Galaxy (1st series) #9, 26]

Aboard the two spaceships, Wolverine was unanimously voted to replace Magneto as the leader of the expedition. Inadvertently, the two ships carrying the mutants trespassed into Shi’ar space, and Gladiator, the greatest warrior of the Shi’ar Empire was dispatched to deal with the unauthorized intruders. A confrontation between Logan and Gladiator lasted for six entire days. In the fight’s climax, Gladiator managed to break off the adamantium laced mid-claw of Wolverine’s right hand. Claiming victory, the Shi’ar then allowed the mutants to proceed. 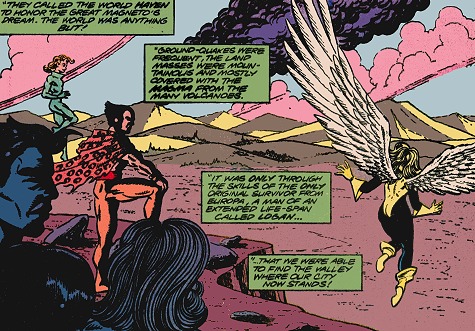 Their journey took several generations, but eventually the mutants reached an inhabitable, though seismic instable, planet. Their fuel supplies nearly depleted, the mutants decided to stay there and named their new home Haven in honor of Magneto. Of the original passengers starting the expedition, only Wolverine was still alive, and it was he who found a secluded valley in which they could build a city. Logan also guided his fellow mutants through the difficult colonization years and was eventually appointed king against his wishes. [Galactic Guardians #1, Guardians of the Galaxy (1st series) #9, Guardians of the Galaxy Annual #1] 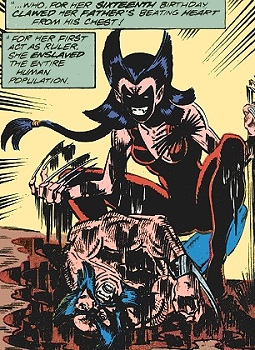 Wolverine’s offspring had no such inhibitions. They willingly succumbed to their innate savagery and easily silenced the people trying to oppose them. Those few that Logan’s descendants couldn’t outfight, they simply outlived. Each ruled with a stronger hand than their predecessor, as fewer mutants and more non-powered humans were born with each generation. The latest in the line of these rulers was a fifth generation descendant of Wolverine named Rancor. On her sixteenth birthday, she assumed leadership by killing her own father. Immediately she proceeded to enslave Haven’s entire human population. Despite outnumbering the mutants by far, there was little resistance from the humans as they believed in a myth that one day the “Over-Men” from the “Motherworld” would come and liberate them. As most humans put their faith in that legend, only a very small underground cell formed. They tried to rebel against Rancor’s rule for several generations, but in over a hundred years they never knew a single victory. 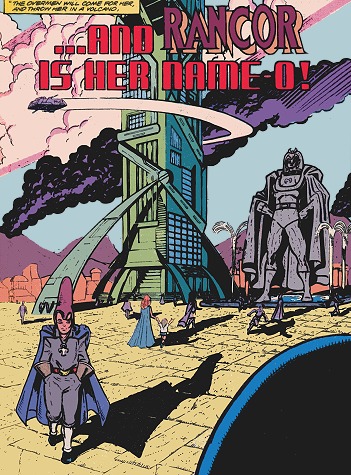 At the start of the 31st century, Rancor had been the ruling queen for over five generations, and the remaining other eight mutants left were her so-called lieutenants. Collectively, they were also referred to as The Nine” and they resided in a huge tower in the central plaza of Haven, that also displayed a giant statue of Magneto. [Guardians of the Galaxy (1st series) #9, Galactic Guardians #1]

The inhabitants of Haven had some interaction with their planetary neighbors, as is obvious by numerous humans being members of the Universal Church of Truth, even though Rancor had outlawed the galaxy-spanning religion on her world. [Guardians of the Galaxy (1st series) #10]

Also in close proximity was a planet originally called Klatuu. In his quest to search for the mutants, the Vision had eventually reached that planet and found it abandoned. Whoever had lived there before had left numerous computers and machines behind, with which the Vision began to interact. Relinquishing his android body, he melded with the computerized planet and became its nerve center, Mainframe. While he later learned the location of the Haven, he could no longer join the mutants as his body was lost. [Guardians of the Galaxy (1st series) #6]