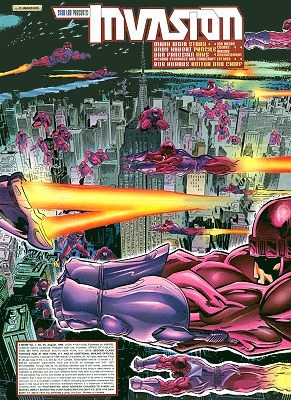 While the heroes were scattered across the globe in search of answers, Onslaught kept himself and his minions busy too. Inspecting the followers of the Dark Beast, namely Fatale, Random and Havok, and deeming them quite useful, he proceeded with his plans to make use of the government’s Sentinels. X-Factor eventually stumbled upon Onslaught‘s plans with the former mutant-hunting robots, now reprogrammed to target only baseline humans, but it was already too late. Post and the Dark Beast’s lackeys kept X-Factor too busy to stop the Sentinels being launched. The Dark Beast even tried to lure both Sabretooth and Mystique to Onslaught‘s side, by promising to get them out of X-Factor. However, the two villains in X-Factor’s custody had no interest to trade in one master for another, and turned on the Dark Beast, who escaped, but not before revealing that the real Beast was locked up somewhere in the building. In the end, some of Onslaught’s lackeys got captured and the real Hank McCoy regained his freedom, but Onslaught had made another step towards his goal of world domination. [X-Factor (1st series) #125-126]

Atop Freedom Four Plaza, the heroes (Avengers, Fantastic Four and the X-Men) gathered, only to behold a horrific sight. Onslaught‘s army of Sentinels, was terrorizing Manhattan, effectively creating a barrier 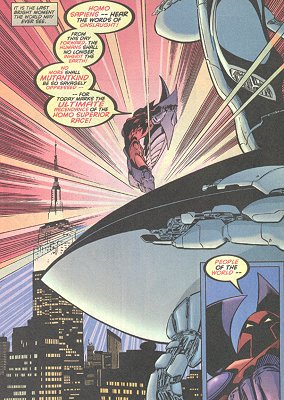 between the island and the rest of the world. While several of the teams’ resident scientists attempted to build some sort of weapon against Onslaught, the others hit the streets of the city to battle the Sentinels. Despite growing tension between Rogue, Joseph and Gambit, they too formed a tied squad and relied on each other to watch their backs. Using designs by Nathaniel Richards, Iron Man began to create an armor to protect them from Franklin’s powers. However, it seemed that all hope was lost. Onslaught had already taken advantage of his new asset, and forced Franklin to create a giant black fortress in Central Park, that dwarfed the tallest skyscraper in its shadow. On the platform on top of his new home, Onslaught announced his declaration of war against humanity before unleashing a massive blast, a mixture of an EMP and a psionic attack. All over New York, electronic devices short-circuited. Iron Man, Vision and Ant Man were left near dead due to their armor and equipment frying out, and the heroes outside were left to face the brunt of the attack. No doubt, though, Onslaught had made his final move, and the thought of defeating him was even more hopeless than before. [X-Men (2nd series) #55]

Even outside of New York City were the effects of Onslaught’s latest moves felt. With the entity still trying to enlarge the number of his followers, Generation X’s tutor, Emma Frost, became subtly influenced by him. Fearing for the safety of her young charges, Emma used her telepathy to force her co-headmaster, Banshee, to leave the plane that most of the team was on, before proceeding to fly it to a place in Canada, hoping to hereby rescue herself and Generation X. They sought refuge in one of Emma’s mansions, where they ran into Toad, whom Emma had previously allowed to stay. Eventually, when free of her influence, Banshee contacted Sasquatch of Alpha Flight and together they confronted Emma, who realized the error of her ways. However they were too far away to be of any help in the other heroes‘ fight with Onslaught. [Generation X #18-19]

At the same time, Generation X’s regular headquarters, the Xavier Institute for Gifted Youngsters in Massachusetts, was visited by Wolverine. Along with his friend, Elektra, he was looking for Gateway, hoping to get more information from him concerning Onslaught. However, the old aborigine remained quiet as ever, only showing them painful memories from their pasts, and nothing more. Elektra and Wolverine correctly guessed that Gateway was showing them these - their worst moments, to prepare them for the truth about Onslaught. Indeed, Gateway then took their astral forms to a different time; back to the day when Xavier mindwiped Magneto right after the master of magnetism had ripped out Wolverine’s adamantium. Neither Logan nor Elektra understood what Gateway was trying to tell them,

however, when he slowed down the time flow for them, they saw it for themselves. To their horror, they observed that within the fraction of a second, Magneto’s dark ego planted its evil seed inside Xavier’s mind. Once planted, these evil aspects slowly grew bigger over time, which is why no one suspected anything was wrong. Returned from their astral journey, Wolverine blamed himself for everything. If he hadn’t pushed Magneto too far, he reasoned, then Xavier wouldn‘t have exposed his vulnerability to such an attack. Elektra convinced Logan that the situation wasn’t his fault, though, and he rushed back to New York to help the other heroes against Onslaught. [Wolverine (2nd series) #104-105, X-Men (2nd series) #25]

Taken out of the Game

At Xavier’s mansion in Westchester, some time after Sinister had left, of all of X-Force only Siryn woke up. Any attempts to revive her friends turned out to be futile. Sunspot, Warpath, Domino, Meltdown, Caliban and Shatterstar were all trapped in some sort of dreamscape where they were each approached by a young boy named Charlie, 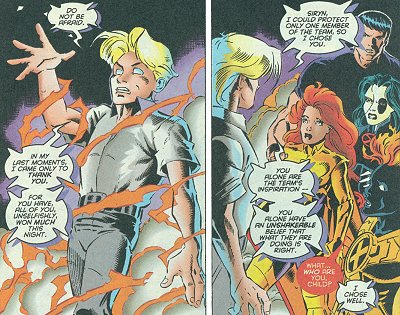 who presented them with an odd choice. Either they could stay in their dreams, where life would always be the way they wanted it, or they could do the right thing and provide their unique assets and qualities to the team and its purpose. Gaining insight to each others hopes and dreams, the X-Force members all followed Charlie to a strange place, where they were attacked by a manifestation of Onslaught. However, the team stood as one, faced the foe and suddenly found themselves back in reality together with Siryn. Charlie appeared in front of them and revealed that he was what remained of Charles Xavier’s goodness trapped inside Onslaught, and that he had been only able to protect one of the group from Onslaught’s dreamscape scenario. He chose Siryn, for he knew that she already had an unshakable belief in Xavier’s dream, wherein he could use the chance to strengthen the others‘ faith. X-Force, however, having survived the experience, didn’t change their opinion that they had failed in their task to protect X-Man from harm. [X-Force (1st series) #58]

In another part of the mansion, the unattended gem of Cyttorak was drawing the attention of both Dr. Strange and Gomurr, another sorcerer who, centuries ago, had banished the Cyttorak deity from the face of Earth. He ventured into the Crimson Cosmos inside the gem to bring Cain Marko back. After several tasks were mastered, Marko eventually had to fight Cyttorak himself as the deity wanted to turn him into his Earthen vessel. Magically aided, Cain Marko did the impossible and won. As such, he reclaimed his power as the Juggernaut and was released from the Cosmos. The outcome of the fight sure had an effect on his ego. He was no longer afraid and thought he could best anyone. [X-Men Unlimited (1st series) #12] He wouldn’t get the chance for another fight against Onslaught, though.

Back in New York, the heroes tended to their wounded and tried to keep the ensuing chaos under control as well as possible. They tried to come up with battle strategies good enough to bring Onslaught down, but as with any large group of different people, they couldn’t really agree on what the best approach would be. 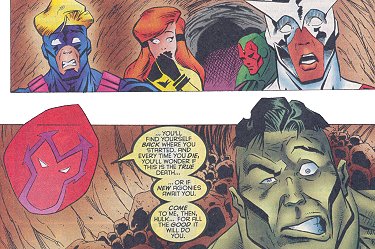 The Hulk thought that they should take the fight to Onslaught directly, but with most of the others not trusting him, he gathered the few heroes that sided with him, still determined to follow through with his plan. The Falcon, Hawkeye, the Vision and Crystal, aided him in making a tunnel to reach the fortress in Central Park from below, but they were soon noticed by Onslaught who trapped them in an illusionary scenario. In the simulation, the Hulk lost control, and while he killed Onslaught, he didn’t care about anything else, like the present Avengers who all died during the fight as well. When Onslaught ended the illusion, the heroes not only distrusted the Hulk further, but they also realized how futile it was to fight Onslaught - never knowing wether they would be truly facing him, or just be trapped in yet another headgame of his. [Incredible Hulk (1st series) #445]

The other Avengers fared a bit better in the streets of New York, where they rescued some trapped people in subway trains; their power having been cut by Onslaught’s EMP wave. They also faced Onslaught’s most powerful lackeys, Holocaust and Post, who seemed virtually unbeatable. 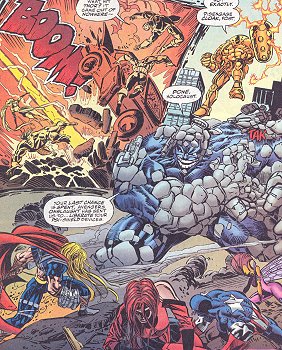 However, with some good thinking on Captain America’s part, Onslaught’s lackeys were outsmarted, and they accidentally attacked each other. His minions defeated, Onslaught revealed himself on all the giant monitors in Time Square, and laughed at the heroes, telling them that resistance was useless. Still, having won one fight in the overall war, the Avengers gained some confidence, and vowed to take down Onslaught anyway, before they shouted their battle cry of “Avengers Assemble” for one, maybe final, time. [Avengers (1st series) #402]

A huge step towards victory was the development of the psi-armors. By combining Xavier’s original designs with some advanced Wakandan technology and other improvements designed by Tony Stark’s own company, Iron Man successfully built devices that were not only capable of shielding the heroes from Xavier’s telepathic powers, but which also provided some temporary protection against Franklin Richards‘ reality-warping abilities. [Iron Man (1st series) #332]