With some of the heroes incapacitated, and others working on the psychic armors, the rest were still fighting in the streets. With the Sentinels now blocking all the city exits, they either tried to help the many innocents trapped inside the borders of Onslaught’s new territory, or, in areas with massive destruction, went looking for survivors. Joseph saved some people trapped in a subway car; however, some of the crowd recognized him as Magneto and attacked him, thinking he had caused the destruction around them. Gambit saved him from the angry crowd and the two men spoke, which unfortunately led to Joseph leaving to confront Onslaught alone, blaming himself for Magneto’s evil. Touched by Gambit’s attempt to connect with Joseph, Rogue ran off with the Cajun to catch up with Joseph.

Inside Onslaught, Charles Xavier awakened and was horrified to see that the beast had also lured Franklin Richards into its belly. He urged young Franklin not to give in to Onslaught and not to trust a single word the entity would say, but the beast, aware of the conversation, arrived to inform Xavier that he had already added the boy’s vast abilities to his own. With that, Franklin was absorbed deeper into the abyss of Onslaught. Even worse, the mad entity teased Xavier that it was no longer within his power to do anything about the situation.

Outside, Cyclops, the Invisible Woman, Storm, Cable, Thor, Gambit and Rogue regrouped just in time to see Joseph attack Onslaught with all his might. Annoyed at Joseph’s arrogance, Onslaught pulled Xavier partially back into the corporeal, for everyone to see him in a hole in Onslaught’s chest. He proceeded to kill the man in order to 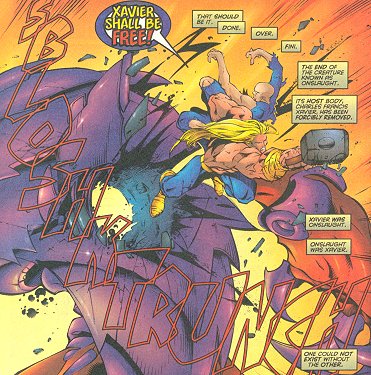 prove that he no longer needed his creator to live. Cable, Cyclops and the Invisible Woman pooled their powers, and were able to form a crack in Onslaught’s armor. Thor used the chance to smash through Onslaught in an angry rage, ripping Xavier out and leaving a gaping hole in Onslaught’s body. Theoretically, that should have been the end of Onslaught, at least the heroes thought so, as they believed that Onslaught could not exist without Xavier. However, in the meantime, the entity had evolved, and now rid of Xavier’s hindering influence, Onslaught was even more powerful. He unleashed a psionic storm that would have killed everyone present, if Cable and Sue Richards hadn’t used their powers to protect them. After the storm subsided, the Invisible Woman asked Xavier if he could sense whether Franklin was still alive in Onslaught, but the professor shockingly revealed that his telepathic powers were gone…perhaps forever! [Uncanny X-Men #336]

Beware the Foes who underestimate a Mother’s Love

Sue Richards was driven to rescue her son, and she ventured deeper into the psionic storm towards Onslaught’s citadel. Cable followed her, realizing how much he and Franklin had in common - both of them were the sons of heroes; the next generation of the X-Men and the Fantastic Four. Unexpectedly, they were approached by Apocalypse, who surprisingly proposed joining forces against Onslaught. Apocalypse explained that he wanted Onslaught defeated because he didn’t want to see the world destroyed, 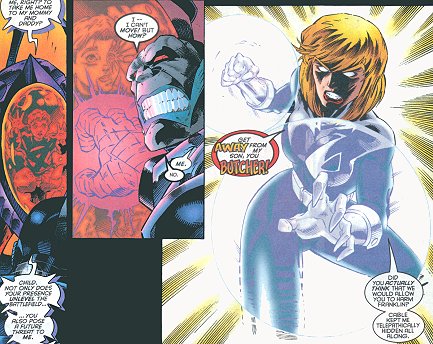 at least not by someone else but himself. To get to Onslaught, though, he needed Cable to allow him access to the astral plane. Though it put his body under even further strain, his techno-organic virus flaring up like never before, Cable took himself and Apocalypse onto the astral plane, where they had to fight telepathic versions of Onslaught‘s lackeys. Once they reached Onslaught’s core and Franklin’s prison, Apocalypse prepared to kill the boy, deeming him a future threat to himself too. In that instance, though, the Invisible Woman revealed herself, having followed the pair the whole time with Cable telepathically masking her presence. She made Apocalypse back down, even though it meant leaving Franklin in Onslaught‘s clutches. Still, she could briefly talk to him and tell him not to abandon hope, before Onslaught transported them back to the real world. [Cable (1st series) #35]

Isolated and alone, young Franklin gave in to despair and attempted to send images of himself to contact his family. However, Onslaught intercepted these manifestations of his thoughts, and distorted the images into the Fantastic Four’s worst enemies. Once they reached the Baxter Building, the Fantastic Four and their friends found themselves under constant attack. 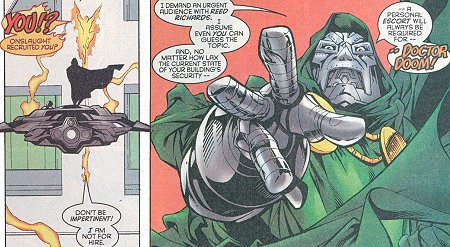 Still, the images came both as a curse and as a blessing, for they told the heroes that Franklin was still alive. During the attacks, the Fantastic Four found many of their allies and of their former members joining them to help. Such heroes included the She-Hulk, Namor, Fantastic Force, the Inhumans, Agatha Harkness, as well as Alicia Masters and even her stepfather, the villain known as the Puppet Master. Another surprise awaited them after the astral constructs had been dealt with. Dr. Doom, of all people, offered his aid as well. Naturally, his intentions were far from noble, but against such a threat as Onslaught, the heroes couldn’t afford to look a gift horse in the mouth, so they reluctantly accepted Doom’s help. [Fantastic Four (1st series) #416] 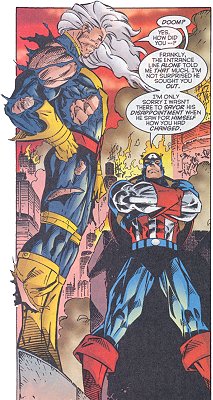 One of Doom’s first actions was rather counter-productive, though. Joining the battles against the Sentinels in the streets of New York, he also happened upon Rogue and Joseph, whom he clearly recognized as Magneto. Dr. Doom considered Joseph a mockery of the man he believed to have once been, and he tried to rally him up into accepting his old self. However, this only further confused the young man, who grew increasingly worried with each piece of information about Magneto’s past deeds. It took a pep talk from Captain America and a conversation with Charles Xavier to lighten his mood a bit. Together, the two men who supposedly created this mess to begin with, came to terms with each other and their inner battles. [X-Men (2nd series) #56]

The Plan Comes to a Close

Meanwhile, Mr. Sinister brought X-Man to his hideout, where he revealed that he had sent Threnody into Nate’s life to learn more about him. Sinister installed neuro-locks in Threnody’s head, and when Nate entered her mind he unwittingly created a connection between them. This allowed Sinister to easily shut down his powers, just like he had done earlier. However, X-Man gained Sinister’s measure, and was able to best his foe. Right then, a portal opened in Sinister’s lair, and Franklin Richards was inside it. “Franklin” called out to Nate and begged for help. 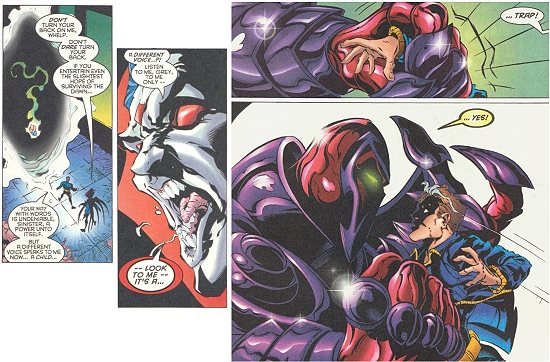 Naturally, Nate wanted to free the child and entered the portal, despite Sinister warning him that it could be a trap. Indeed it was, and once Nate was inside, Onslaught showed his true face to Sinister before the portal behind him. The entity had gained yet another mutant with nearly unlimited powers to add to his already impressive abilities. [X-Man #19] This wasn’t Onslaught’s only interest in X-Man, though. He also entered Nate’s mind to find out more about his home world; the Age of Apocalypse. He explored it, and couldn’t believe that Nate and his world’s X-Men defeated Apocalypse, only so that they could share the planet with the humans. Onslaught angrily changed his goal. He now wanted to create a world similar to the Age of Apocalypse, only with him as its ruler. He considered both humans and mutants unworthy to survive: Man or mutant…no one would survive Onslaught! [X-Men (2nd series) #56] 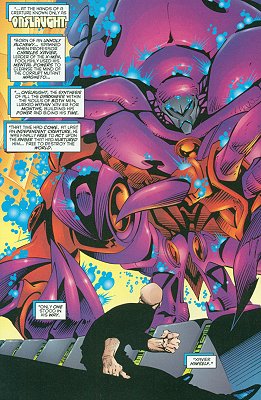 Professor Xavier had enough of all the destruction and the pain that he felt he was entirely responsible for. He decided to confront the menace himself without informing the rest of the X-Men, and sought up Onslaught in his citadel. After failing in delivering a speech to make Onslaught understand how important life is, the beast quickly destroyed Charles’ wheelchair and prepared to finish the man off for good. Xavier was helpless and done for, when surprisingly Rogue flew seemingly out of nowhere just fast enough to rescue her mentor. Xavier‘s surprise turned to awe, when he realized that not only she, but all his X-Men had come as well. Jean Grey had telepathically sensed Xavier’s intent and alerted the rest of the X-Men. Despite being tired of earlier battles, Cyclops gave the team the courage to give everything they had to finish their adversary off once and for all.

Onslaught however wasn’t impressed. He used tricks none of the heroes had seen before, like for example create a big, giant stone hand from the ground to crush his opponents. This stunt and others overwhelmed the X-Men, but they tried to regroup and continue fighting. Exhausted and powerless, unfortunately Xavier couldn’t do much to help his defeated students, but he sensed that hope was on the way, as well as courage…for the X-Men were no longer on their own! Having gathered every other available super-powered individual for help, the Avengers and the Fantastic Four joined the fray. Heroes and mutants banded together as one huge team, to win or die side-by-side. That was enough for Onslaught, who angrily unleashed yet another blast and drove the heroes apart.