Onslaught is a rather huge crossover with nearly 50 issues involved in the event. Basically, they can be divided in issues set shortly before the crossover - containing hints to Onslaught’s identity or early appearances of him - ; likewise, there are other issues dealing with the aftermath to Onslaught. Even not counting these issues, there’s still over 30 comic books that make up the actual Onslaught crisis, and to bring some structure to the crossover, Marvel labeled the issues either Phase or Impact on the cover.

These labels carry separate meanings. The issues in which Onslaught has a focus on himself or things crucial to his plans happen are called Phase, while the Impact books show the side-effects of things that occur due to Onslaught’s arrival, like Spider-Man fighting some rogue Sentinel in the streets of New York. The numbering (i.e. “Phase 1” and “Phase 2”) pertains to the fact that the Crossover takes place over two months, a Phase 1 issue being released during the first month and Phase 2 during the second; naturally the same holds true for Impact.

Basically, you can read the crossover as Prologue, Phase 1, Impact 1, Phase 2, Impact 2 and Epilogue, however, the issues of Phase and Impact often intermingle, and there are a large number of cross-references with the events of one title being referred to in another. The most important of these cross-references can be seen in the flow-chart diagram below. Please be aware that this suggested read order is for some parts based on assumptions. It works, but surely some issues could be sorted in a different, also working order. 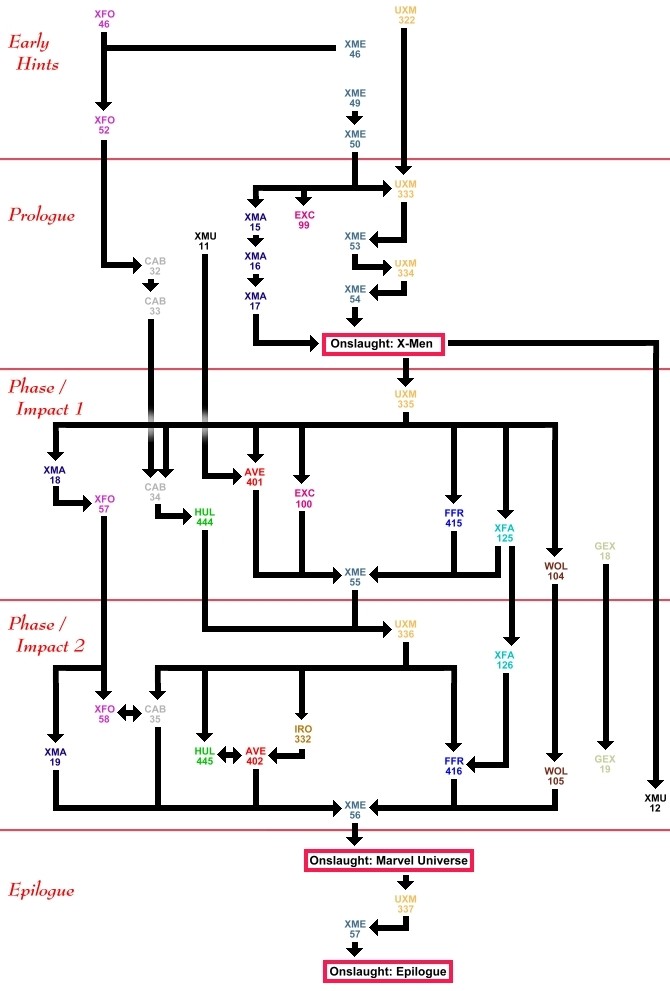