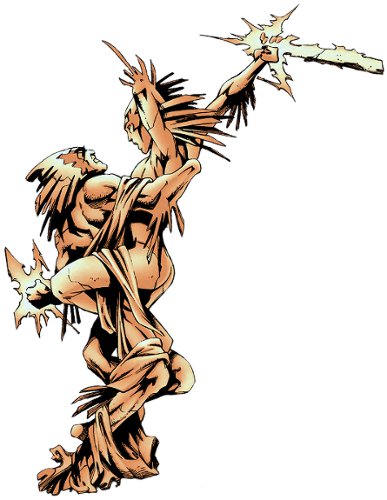 Religion is very important for the Shi’ar. Their beliefs are based on the marriage of Sharra and K’ythri, two gods who didn’t want to be married but were forced into it. In marriage, they found strength and in that strength they found love. Finally, both gods benefited from their forced union.

The theme of this legend has become a central concept of Shi’ar politics. They encounter other races in space and force them into "marriage,” into joining the Empire, whether they want to or not. The Shi’ar believe the process to be justified, as they have become the largest Empire in the known universe and the various alien races are provided with anything that they need. However, these oppressed races lose their individuality and freedom as their cultures and governments are adapted to Shi’ar structures. [Starjammers (1st series) #1]

Much like the pantheons of gods on Earth like the Adgardians and Olympians, Sharra and K’ythri were more than mere legends but actual, corporeal beings of true power. In one of her visions, the Greek goddess Hera witnessed a battle between the Japanese god Amatsu-Mikaboshi and the Skrull gods during the Skrull’s Secret Invasion. 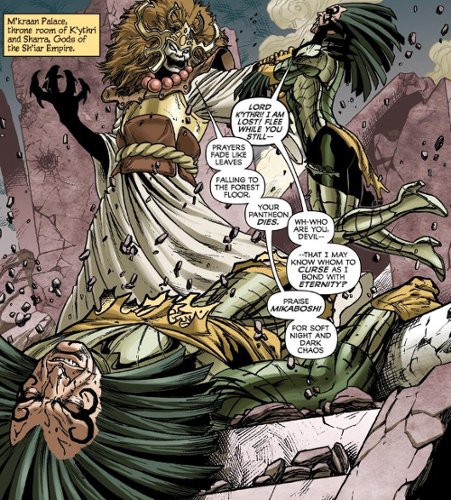 In the vision, Amatsu-Mikaboshi had conquered the entire Skrull pantheon and then attacked Sharra and K’yrthi in their M’Kraan palace. K’Ythri lay prone, possibly even dead, while Mikaboshi held Sharra by the throat. Whether this vision came to pass is unknown, but later events left the question moot. When Mikaboshi unleashed the conflict known as the Chaos War, Hercules intervened and managed to undo all the damage caused by Mikaboshi, presumably including the slaughter of the Skrull pantheon. [Assault on New Olympus One Shot #1, Chaos War Crossover]

The Crystal Claws are a religious sect that expects the Forsaken One (Adam-X, the secret son of former Emperor D’Ken) to take over the Shi’ar Empire one day. They even temporarily allied themselves with Kree radicals to instigate discontent with Lilandra’s rule.

Within the vast Shi'ar Empire, there are many tales and rumors that are passed down from one generation to the next. Following these old stories, former Emperor D’ken discovered the location of the legendary M’Kraan Crystal, often described as the “end of all there is.” If not for the X-Men, D’Ken’s tampering would have unleashed the crystal’s destructive energies. Another time, Deathbird solved the mystery of an old rumor regarding a power source called Phalkon. Actually, it was nothing more than the bird-shaped Phoenix Force that had been seen soaring through the universe centuries ago.

The Shi'ar have a legend of an anti-self, an entity that each each individual much fight before they're born. To the Shi'ar these entities are kown as Mummadrai.  Legend became a reality for the Shi'ar when Charle's Xavier's mummadrai Cassandra Nova took control of Empress Lilandra and devastated the empire.