When Chris Claremont and Dave Cockrum brought the Shi’ar into the pages of the X-Men (Uncanny X-Men (1st series) #98, 105, 107-108), it was more than just another alien race that had been added to the Marvel Universe. The Shi’ar were a vast galactic empire that would impact both the X-Men and the greater marvel universe for decades to come. 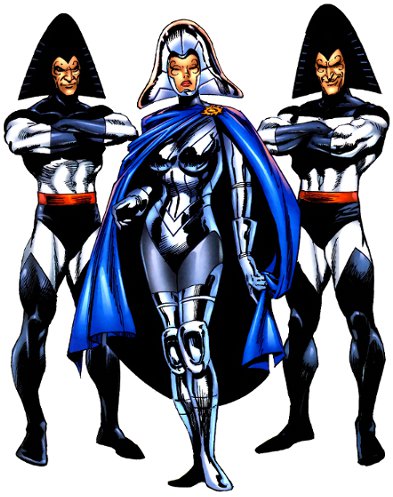 The Shi’ar appear superficially similar to humans but are in fact an avian race of bird people. They have light, hollow bones and, on their forearms, there are still some feathers left from wings that were lost over centuries of evolution. The “hair” too consists of feathers, of which there seem to be two different styles. Most Shi’ar have feathers sprouting in a triangular shape away from the face, one peak on the top of the head and one peak on each side slightly over the shoulder. Empress Lilandra, for example, has always been portrayed with this triangular feather-head. The other hairstyle is bushy on both sides and very flat on the top. Cerise and Deathbird are prominent examples.

Most Imperial Guard members seem to stem from the many alien races that belong to the Shi’ar Empire, but some of them (e.g. Electron) seem to be Shi’ar or hybrids. Whether their powers are result of mutant genes or artificial is unknown. 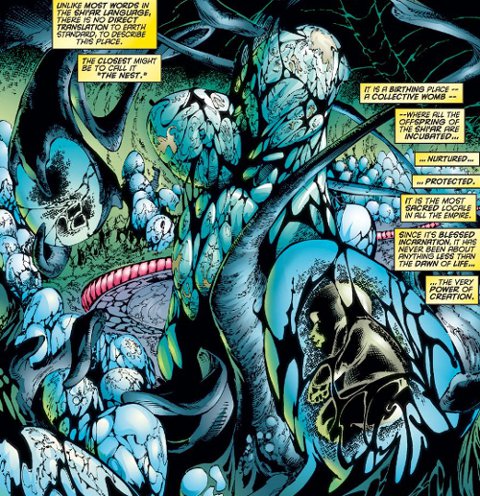 Like their avian ancestors, the Shi’ar still conceive their offspring as eggs. These eggs are nurtured in special chambers on “The Aeriea,” another name for their native planet Chandilar, and the children are referred to as Hatchlings. Apparently, Shi’ar genes allow some crossbreeding; Adam-X is rumored to be the child of a D’Ken and a human mother, and the human mutant Vulcan and Shi’ar Empress Deathbird were able to conceive a child.