SIBLING RIVALRY (a comparative analysis of Havok and Cyclops): Page 2 of 5

Before we can go any further we must compare the backgrounds that these two brothers have had. Both of them suffered the then seeming loss of both their parents when they were pushed from a burning plane. Scott was able to save the brothers with the emergence of his mutant power, dampening the impact of the fall with his optic blast. The brothers were taken to an orphanage, but early on, Havok was adopted into a loving family, where as Scott stayed at the orphanage all his childhood. It should be noted that Sinister ran the orphanage and moved Alex away as to make Scott more emotionally vulnerable, to his plans. The Blandings, whose son Todd had been killed in a car accident, adopted and raised Alex. However the death of their son had left them and their daughter disturbed and they constantly tried to make Alex fit into their image of their son, which he tried to do as best as he could. Alex led a relatively normal life and went onto to study Geophysics. Scott on the other hand was a loner. Sinister was trying to manipulate him whilst at the orphanage, albeit subconsciously, until Scott ran away from the orphanage and was found by Professor Xavier. Scott became part of the X-Men from day one where as Alex didn’t join the X-Men till some time later after being captured by the Living Monolith.

Here we already have a first, major difference. Scott was placed in circumstances, where every part of his life was orchestrated by Mr. Sinister, who acted as his roommate Nate, the orphanage’s headmaster and several other roles. He limited contact to the outside world, and whenever a friendly person tried to get Scott to open up, Sinister intervened. Still Scott pulls through, and finally opposes the orphanage and all it stood for till he ran away. [Classic X-Men #41-42] Alex on the other hand, too is manipulated by the Blandings, but not with as much perfection as Sinister does with Scott. Yet Alex fills out the role expected from him and acts the part of the good son the Blandings lost. [X-Factor #minus 1] 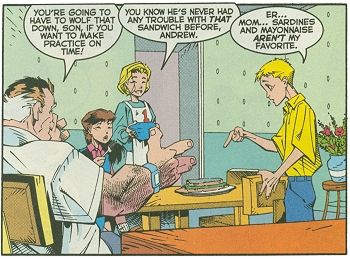