SIBLING RIVALRY (a comparative analysis of Havok and Cyclops): Page 5 of 5

If Things Were Different

The relationship between Scott and Alex was also a relevant plot element in some alternate timelines. 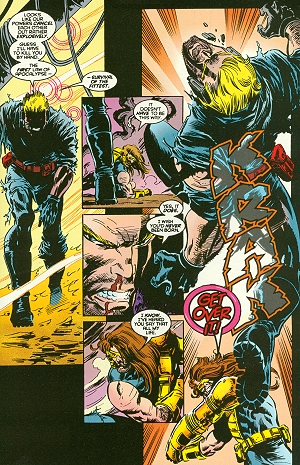 AGE OF APOCALYPSE
In this reality Scott and Alex have been brought up by their “father“, Sinister. Alex has always been the dutiful son and done what has been expected of him, however Cyclops was Sinister's favored “son“ and could do no wrong. Alex had great difficulty in dealing with this was envying his brother’s position. He finally saw his chance to rise to power when he suspected Scott of helping the prisoners in Apocalypse’s slave pits to escape. Havok uncovered evidence and had Scott arrested, together with the captive Jean Grey. Cyclops and Jean escaped, but Havok hunted them down. They opposed each other a twice and in the end Havok killed both Scott and Jean, before dying at the hands of Wolverine – not that it mattered anymore, as the entire AoA was about to be destroyed by nuclear bombs.

MUTANT X UNIVERSE
At the end of the X-Factor series, Havok’s consciousness was transported to another universe, where he took over his counterpart’s body, who too had just died. Slowly Havok learned about the different history of this new reality. Here Scott was kidnapped by the Shi’Ar like their parents, and Alex grew up as an only child. Actually this reality’s Havok lived the life of Cyclops, he was among the original five X-Men, became their leader and would years after Jean‘ Grey’s disappearance marry Madelyne Pryor. The even had a kid named Scotty after his long lost brother. Soon some people, like little Scotty or his nanny Elektra, recognized that Havok was a changed man. The Mutant-X-verse Havok was actually very cold and arrogant, and not a likeable person. Yet our Havok loved the chance to live outside of the shadow of his older brother Scott and led the Six, this world’s version of X-Factor, rather well. Even when he was provided the chance to return to his native universe, Havok stepped back to help his new-found friends. He preferred to stay with them than to return to a universe where he probably was considered dead, and who knows what changes could have occurred since his departure.

In the Mutant X-verse, Scott became part of the Starjammers and later returned to earth with his team. In this reality Cyclops was more reckless, as he didn’t have to carry such a heavy burden like the X-Men leadership on his shoulders. On earth Cyclops met with Havok, and he admired the all together person that his younger brother grew up to become.