SIBLING RIVALRY (a comparative analysis of Havok and Cyclops): Page 3 of 5

Havok was happy to let Cyclops lead the X-Men without confrontation. That was until they fought Krakoa, the living island. Lorna's power was being pushed to the limit as they tried to defeat Krakoa and Havok pleaded with Cyclops to stop her. Cyclops had no choice but to let her carry on even if it meant her death. Luckily she survived but the first signs of difference between the brothers was shown. Havok realized that the responsibility of being part of the X-Men was something he didn't want to deal with, and left with Lorna to finish their degrees. [Giant Size X-Men #1, Uncanny X-Men #94]

A short while later Alex and Lorna were manipulated by Eric the Red into attacking the X-Men. This led to the first confrontation and fight between the two brothers. Scott confronted Alex to find out why he was attacking them and he told him he 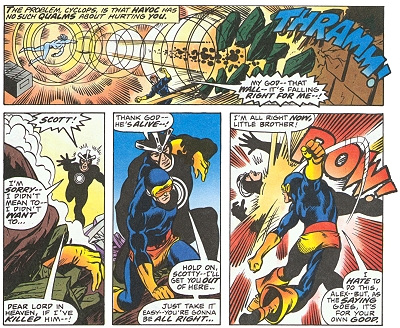 was being controlled. Cyclops tried to knock Havok down to break the mind control, but Havok leveled a wall on top of Cyclops. Worrying about his brother, Havok helped Cyclops out of the rubble but Cyclops punched Havok in the face. High above, Lorna got knocked out by storm. Havok was enraged and then knocked Cyclops down with a blast of his power before rushing to her aid. When more X-Men arrived, Eric the Red decided to retreat and flew off, carrying Havok and Polaris. Cyclops had an opportunity to shoot them down but didn’t. Wolverine thought that Cyclops was gutless for letting them escape and in anger Cyclops punched him to the ground before walking off. He realized that his own brother Alex had tried to kill him. [Uncanny X-Men #97]

Thanks to Professor X Alex and Lorna were later freed from Eric the Red’s control (off-panel) and they returned to their studies after a short vacation on Muir Island. They helped out occasionally but one of the important points that needs to be raised at this point is that Alex could handle not being part of the X-Men, and preferred to lead a normal life with his love. It wasn’t until the death of Jean Grey (actually Phoenix II) that Scott could leave the X-Men, and even then it was only meant as a temporary leave of absence. Finding out that Corsair was their father, Scott took him to meet Alex, before all three left to visit their grandparents.

After a short break in Alaska and meeting and marrying Madelyne Pryor, Scott too decided to retire, but he soon rejoined when he was informed of Xavier’s bad health Alex was still happy with Lorna in Nevada. When Scott’s son was born, he and Madelyne has a very serious argument and finally he left the team again to try a fresh start with Madelyne but he never felt comfortable by leading a normal life. Weeks later he was informed of Jean Grey being found alive. Scott abandoned wife and child to come to New York and see her and then become a founding member of X-Factor, made up of the original five X-Men. [Uncanny X-Men #201, X-Factor #1]

It wasn’t until after the Mutant Massacre that Alex joined the X-Men once more. Alex happened to visit the X-Men at a bad time, as they were planning to go undercover. They could allow that somebody knew their location, so Psylocke wiped Havok’s mind, only his training with Professor Xavier was too good and he experienced bad dreams of the X-Men being in danger, so visited once more. A second mindwipe was too risky, and the X-Men wondered what to do, even killing Havok was briefly considered. Alex understood that it was a time for drastic measures and rejoined the team since he was needed. Unless his brother however, Alex wondered if his lover would approve. It would have been interesting to see what choice he would have made if Lorna would have asked him to not go back to superheroing, but unfortunately such a scene never happens, for simultaneously Polaris got possessed by the psychic entity Malice to join the Marauders as their leader. [Uncanny X-Men #218-219]

Soon Madelyne contacted the X-Men for help as she was on the run from the Marauders; they arrived right in time to protect her from Sinister’s henchmen. She told the team that Scott had abandoned her and the baby, that was now missing. Havok swore that he would stand by Maddie’s side to make up for his brother’s mistake. [Uncanny X-Men #221-223]

When the X-Men resettled in the Reavers‘ base in australian outback, Madelyne pulled her weight to the team by mastering the cyborg’s magnificent computer system. Madelyne learned about X-Factor’s true intention through an interview, yet kept this secret and fed the X-Men with false information, so that they still would believe X-Factor to be a mutant hunting group. Both having been abandoned by their lovers, Havok found himself more and more attracted to Madelyne, who secretly was in contact with the Limbo demon N’astirh. [Uncanny X-Men #239]

X-Factor and the X-Men finally met during Inferno; N’astirh had found the baby and given it to Madelyne, aka the Goblyn Queen. She intended to sacrifice the child and was opposed by X-Factor. Yet when the X-Men arrived on the scene, she switched back to „plain“ Maddie and 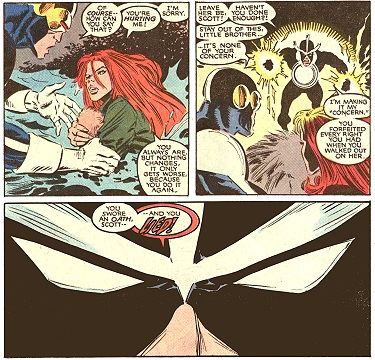 pitted the two teams against each other, claiming that Scott wanted to steal the child from her. Cyclops approached Madelyne and they argued, till Havok stepped in to protect Madelyne from his brother. Alex accused Cyclops of abandoning his wife when she most needed him. Madelyne transformed back into the Goblyn Queen and left, forcing Cyclops to choose between going after her or saving Jean. Scott followed his heart and rescues Jean; however Havok went after Madelyne and even though he realized that she wasn’t the same person anymore, he stayed true to his promise and stood by her side. Alex then became the Goblyn Prince and was ordered to bring his brother’s heart and Scott and Havok battled.
Finally it all came down to a fight between Jean and Madelyne, who encased themselves in a telekinetic bubble. Havok agreed to help breach the bubble, but he wouldn’t strike at Madelyne, and still did not approve of the way his brother Scott handled his wife. The brothers joined forces, blasted the force bubble together and eventually broke it down, only to witness Madelyne’s death. 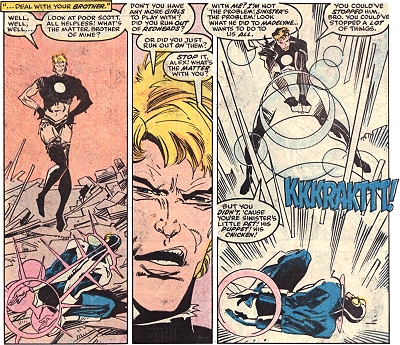 Realising Sinister was to blame both teams went after him. Cyclops tried to fire at him but was somehow unable to do so. Turned out that Sinister had placed a mental block on Cyclops during his stay at the orphanage. Alex fired at his brother full force, knowing that this would make him stronger also he started to mock and annoy him. Meanwhile the battle continued and a stray blast hit Jean, who fell into Sinister’s arms. Seeing his lover in his foe’s arms finally broke Scott’s mental blocks; empowered by his brother’s plasma bursts he hit Sinister with such a strong optic beam that it blew Sinister apart. With Madelyne gone, the brothers settled their differences over her. [Uncanny X-Men #242-243, X-Factor #38-39]