SIBLING RIVALRY (a comparative analysis of Havok and Cyclops): Page 4 of 5

A few weeks afterwards Havok stepped through the Siege Perilous and was not heard of for quite some time. When X-Factor arrived in Genosha for a rescue mission, they were discovered by the Magistrates and Cyclops got hit by a powerful plasma blast. 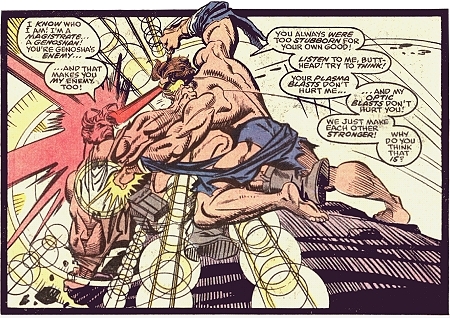 He was surprised that he was unaffected and that only his clothes were damaged. Scott fired an optic beam against the Magistrate who attacked him and as he too lost his clothing and helmet it became clear that it was Havok. The Siege Perilous had transported Alex to Genosha, where the amnesiac X-Man had been introduced into the Magistrates. The brothers fought but with their powers having no affect on each other, they only became stronger. Scott tried to remind Alex of who he really was by grabbing his ears and knocking his head down in a certain way like they did as children. Alex was on the brink of believing Scott, but right then Pipeline teleported the whole Magistrate team out.

Later on, whilst breaking into the Magistrate Citadel, Cyclops was opposed by one single Magistrate – again Havok. They started to fight and since they couldn’t harm each other with their powers, Alex pulled a gun. Still Cyclops was faster and could twist the gun away to hold Alex in a tight grip. Scott then tried to get through to Alex by telling him how they together as children had to use one single 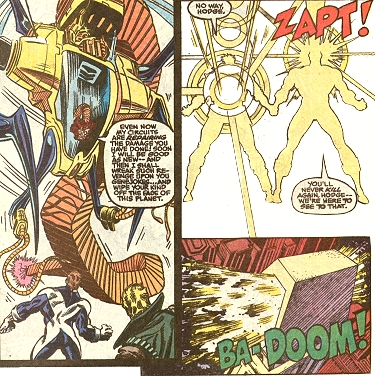 parachute to survive and held each other in such a tight grip like now. Finally Havok remembered who he really was, right as Cameron Hodge arrived and grabbed Cyclops from behind. Alex reached for his gun and pointed it towards the mechanical monster, but shot his brother instead. There was no other way to lure Hodge into still falsely believing Havok to be loyal, providing him with the chance to possibly strike when least expected. Havok secretly tried to help the X-Men, but as Hodge learned about the backplotting he killed the magistrate Wipeout and framed Havok for the murder. After the X-Men were able to free themselves the brothers decided to finish the fight with Hodge themselves. They headed towards the roof and used their energy blasts synchronized. Below, near the citadel, the other members of X-Men, X-Factor and New Mutants watched as the roof section was blown apart. Through the smoke they saw that the fight still was going on, but the brothers fired blast after blast till the mechanical body was destroyed and only Hodge’s head remained. [X-Tinction Agenda] 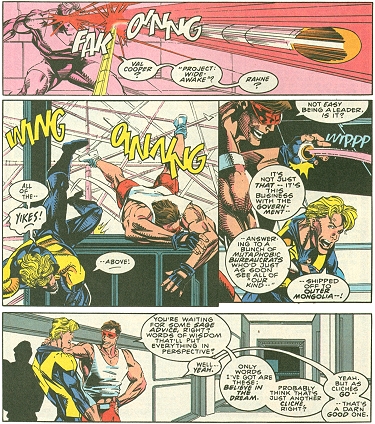 When the original five rejoined the X-Men, Valerie Cooper recruited a new governmental team. She talked with Xavier and Cyclops and together they decided that they wanted Havok to lead this team, consisting of himself, Polaris, Multiple Man, Strong Guy, Wolfsbane and Quicksilver. Although Alex was doing quite well as a leader, he was insecure and constantly compared himself to his older brother Scott, who had leading experience for years. During X-Factor’s psychological session with Dr. Leonard Samson, Alex admitted his insecurities. He also talked with Scott about the problems weighing on his mind, but he could give much advise safe to believe in himself and the dream. [X-Factor #71, 87, 93] 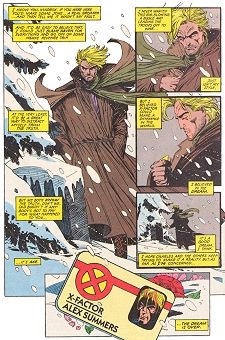 Alex’s doubts climaxed in his reaction to the first team member dying under his watch. Jamie Madrox, the Multiple Man, had been suffering from the Legacy Virus and his condition was deteriorating. The villainess Haven offered to try and cure him and having no other choice Havok allowed it, only the process didn’t work and Jamie was dead. (It was later revealed as only one of his dupes) Havok took blame for this, and began to tear himself apart because of it. He did not attend the funeral, but visited the gravesite later, after the others had left. Mourning Jamie’s death, he questioned his leadership again and decided to quit the team. [X-Factor #100-101] 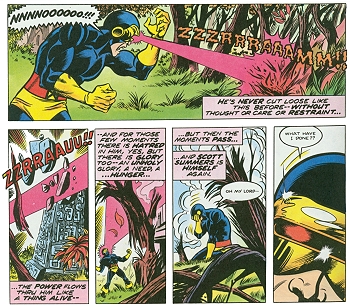 Scott on the other hand dealt quite different with the first death during his tenure as the X-Men’s leader. After the death of John Proudstar, aka Thunderbird, he wondered around the Xavier estate. Finally he unleashed all his inner doubts and anger and fired randomly with his optic blast at full force, destroying trees and a N’garai cairn in close proximity. A few minutes later, Scott had himself under control again, but he knew that he could have hurt somebody by accident. [Uncanny X-Men #96] The brothers‘ reactions are quite surprising, as they seem to be reversed, actually Havok is the hothead, and Scott the quiet loner. 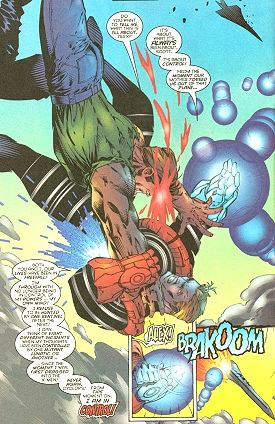 Of course Havok returned to X-Factor, but somewhat later he was abducted by the Dark Beast and his minions. Alex then returned later opposing X-Factor apparently brainwashed by McCoy, though he later admitted that he only faked the brainwashing was successful to uncover the many dark secret projects of McCoy’s laboratories. During his time as a villain Havok tried to kill his lover Polaris, sprung the Dark Beast out of prison and then led the Brotherhood in an attempt on the life of J. Jonah Jameson. He tried to attack Jameson, aboard a plane, but Cyclops and a few other X-men had been warned of the assassination and were among the passengers as well. Cyclops started to fight his brother, and they both dropped out of the plane. Even in free fall the fight continued; Cyclops tried to convince Havok of the error of his ways, but Havok told him “ For the first time in my life -- NOTHING IS HAPPENING TO ME ! No Living Monolith or Erik the Red ! No Malice or the Genoshan Magistrate ! No Dark Beast ! I'm not living under the wing of Professor Xavier -- or in the shadow of my brother anymore ! Don't you get it, Scott -- for the first time in my life, I am free ! FREE ! “, before teleporting away and leaving Cyclops to die. Luckily Storm saved Cyclops at the last minute. [Uncanny X-Men #339] 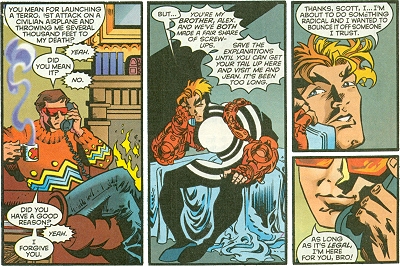 A few weeks after Alex had finished his undercover job, he tried to make up with the people he endangered. His lover Polaris understood the need to expose the Dark Beast, but not why he did not fill her in on his plans. She agreed to continue to work with him, but their relationship was over. Alex then gave Scott a phone call to explain his actions, but Cyclops didn’t even want to hear the arguments. He only asked if Alex had a good reason for his actions, and when Havok confirmed, he forgave him. [X-Factor #149]

A few days later Havok was transported into a different reality (Mutant X Universe) and it is unknown whether he will return. Havok was in a malfunctioning, exploding time machine and is considered dead by Cyclops and the X-Men. Only Lorna has the faint hope that he somehow survived and might return.