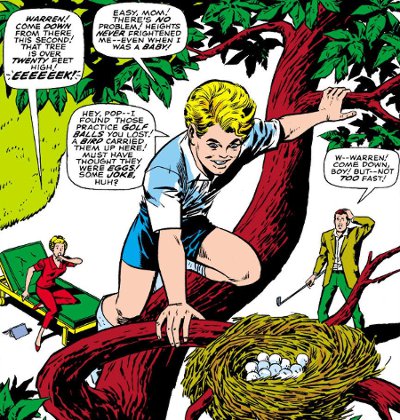 Warren Kenneth Worthington III was born in Centerport, New York to Warren Kenneth Jr. and Kathryn, in an extremely wealthy family. As a child, he scared his parents to death as he kept climbing on trees and the mansion’s roof, apparently unafraid of any height. Later, the Worthingtons sent him to a private school in New York, where he met his roommate and best friend, Cameron Hodge. Warren pulled top marks in everything and was also a good athlete – it seemed that he had everything. 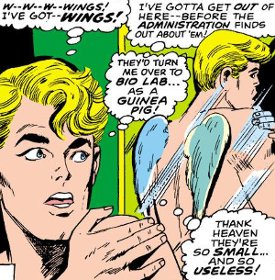 However, one day, two small growths began to emerge on Warren's back. It wasn't long before they grew into full-fledged, angel-like, feathered wings. Warren knew that he could not allow anybody to find out about them, so he made himself the most hated kid at school, until he was ordered to move into a separate and lonely room.

Warren confided only in the family’s private medic, Dr. Stuart, who advised him to keep the wings secret, even from his parents. The wings grew bigger each day and Warren was both exited and yet also concerned, as it became more difficult to hide them.

One night, there was a fire in the school’s dorm. Warren tried to run out but, when he found the staircase already on fire, he had no other option than to jump out of a window, hoping that the wings would slow his fall.

Much to his own surprise, he found that he could use them for flying. As there were still some kids trapped in the building. Warren disguised himself with a wig and a nightshirt to look like a true angel while saving those left in the dorm. [backstory in X-Men (1st series) #54]

Electrified by this rescue, Warren designed a bright costume for himself and became a local super hero known as the Avenging Angel, using a gun with gas-filled bullets to stun his opponents. His short-lived exploits brought him to the attentions of Professor Charles Xavier and his rapidly forming X-Men; Scott Summers, Cyclops, and Bobby Drake, Iceman. When Warren found them waiting in his apartment, he at first mistook them for enemies, especially as they were after a vial he had retrieved from a group of thieves the night before. However, the vial contained a dangerous nuclear explosive and, once Warren was convinced, he took the vial to Earth’s atmosphere, where the extreme cold allowed its secure deactivation. Warren nearly passed out from the thin air but Xavier’s mental contact helped him remain conscious.

Warren realized that if he hadn’t knocked Iceman unconscious in the battle, he could have handled the crisis much easier. Since he still had a lot to learn, he accepted Xavier’s offer and joined the X-Men. [backstory in X-Men (1st series) #55-56] Along with Hank McCoy (Beast) and Jean Grey (Marvel Girl), the team was complete and soon they made their public debut battling Magneto. [X-Men (1st series) #1] Among the X-Men, Angel battled such foes as the Brotherhood of Evil Mutants, the Blob and Vanisher.

Almost from the day that Jean had joined the team, Warren showed a personal interest in her and, with his self-confidence, he usually beat the other X-Men when it came to driving Jean to the train station or spending an afternoon together. Jean did like him as a friend, but secretly loved Scott and tried to invite him along. [X-Men (1st series) #3]