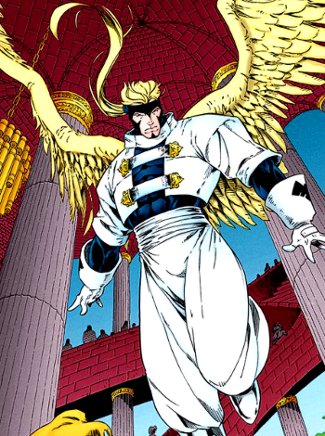 In the Age of Apocalypse, Warren Worthington never suffered the physical mutilations at the hands of En Sabah Nuhr that he did in the main reality, but that didn't mean his soul came through intact. The Angel was a collaborator, making deals with Magneto, Apocalypse's forces and the Human High Council in order to keep immunity for himself and his nightclub in Manhattan, called “Heaven“. He catered to the debaucherous needs of Sinister‘s Mutant Elite Force while at the same time providing small comfort to the human resistance and the underground trail to Avalon. Warren eventually firmly chose a side after his friend, Karma, was tortured and killed by Sebastian Shaw and the Shadow King. He died in a suicide attack on Apocalypse's citadel. However, the explosives he carried with him blew up parts of the defensive systems, allowing the X-Men to break in and eventually correct the timeline by sending Bishop into the past. 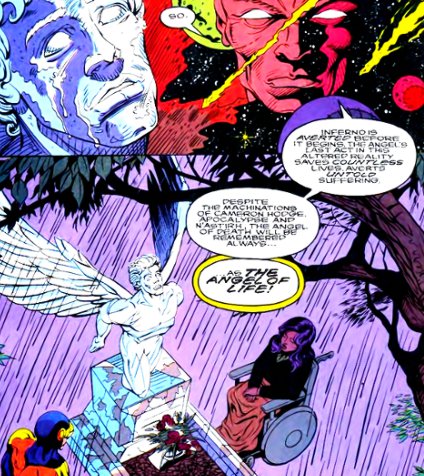 When Warren, as Apocalypse’s Horseman, Death, believed he had killed his friend Iceman, he didn’t snap back to his sense in the timeline depicted in What if (2nd series) #65. Instead, he became a bitter person with a deep hatred for humanity and, whenever he came across someone who performed a crime, he killed him, no matter what crime it was. He also didn’t listen to any attempts of X-Factor to reach out to him and eventually killed the Beast when he didn’t want to let him go. Only when Candy Southern was kidnapped by Cameron Hodge and the Right did some of Warren’s old self re-surface. He hunted the kidnappers down and killed them without mercy, only to be approached by Hodge’s ally, the Limbo demon N’astirh, about forming an alliance. The Angel despised his ideas of a demon-ruled Earth and, to make sure that N’astirh couldn’t start the Inferno, he killed him, even though it cost him his own life as well. Because of this act, Candy and his remaining friends chose to remember him as an “Angel of Life.” 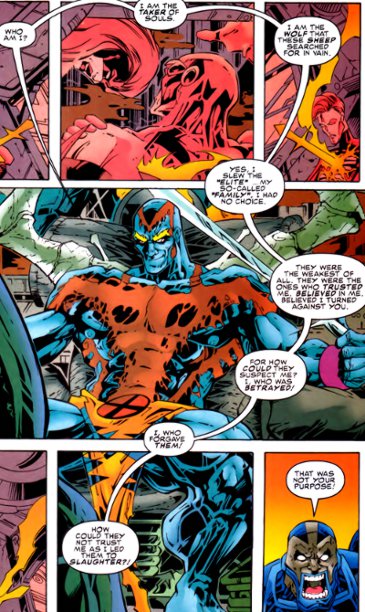 In the alternate reality shown in What if (2nd series) #101, Warren too was turned into Death by Apocalypse, but rather soon switched sides and rejoined his teammates among X-Factor. With Archangel by their side, they were a rather proactive force and effectively dealt with many of their enemies. However, the changes were more than skin-deep, and Warren became more and more alienated from his friends, as Apocalypse’s philosophies of “survival of the fittest” reemerged several times. At first, Warren started slaughtering X-Factor’s enemies, but eventually he turned on X-Factor and Apocalypse’s Horsemen too, until they were all dead. Apocalypse was rather mad about it, as his creation had killed even people he would have deemed worthy to survive, but Warren reasoned that they were unfit too, as they had made a big mistake in trusting him. In the end, Archangel even turned on his creator to see whether he was fit enough to survive himself. The outcome of this battle was not revealed. 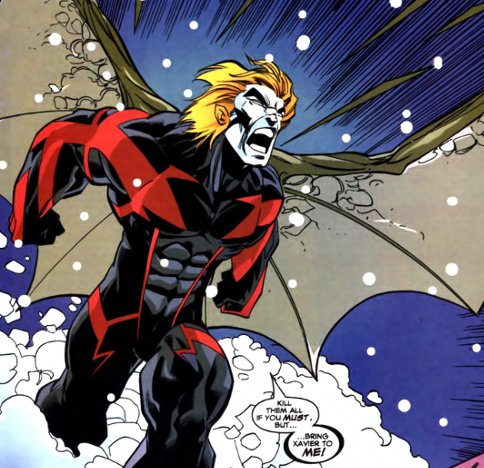 Warren's transformation into a Horseman took a very different turn in the Mutant X universe. Instead of Archangel, he became The Fallen: a pale, bat-winged creature, able to breathe fire. Worthington let his misfortune consume him in this reality and he gave over almost completely to his dark urges. The Fallen ultimately lost the battle between good and evil within him, and turned against his allies in the Six. Cruel and merciless, the Fallen was not to be trusted by friend or foe. Later on, he returned with the Horsemen, apparently as a force for good (or at least the lesser evil), as they helped the Six to oppose a Professor Xavier gone bad. 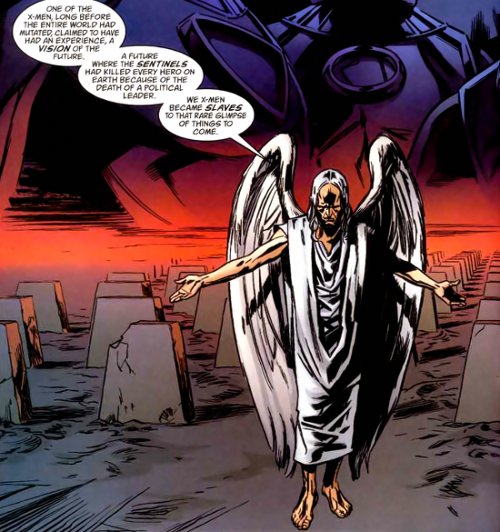 In the Earth X universe, Warren Worthington's life has taken an about-face. The rich playboy had dropped all the finer things from his life and now spent his time bringing food and supplies to the less fortunate. He dressed himself in a flowing robe befitting his new role as the “Angel of New York.“ Warren seemed to be nostalgic for his time with the Defenders, as he spent time associating with other former members of the team, like Nighthawk and Gargoyle. Later, he joined several other heroes in an attempt to overpower Mephisto’s followers.

One of many super-beings to become unstuck in time, a version of Angel was summoned by the Time Broker to join Weapon X, the more merciless of the two teams hopping around the dimensions in order to fix timelines gone wrong. Outwardly, this Warren Worthington could easily be mistaken for the main universe‘s present-day Archangel -- pale skin, feathered wings, even the same costume. On the other hand, this Warren carried automatic weapons, and had no scruples about using them. Little else is known about him: his arrival and departure both occurred behind the scenes and the ramifications to his becoming unstuck in time were never elaborated on. 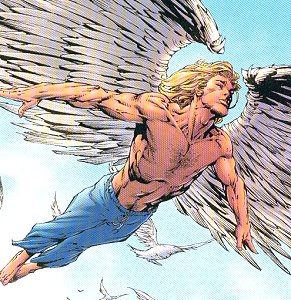 In the main reality, Warren only grew his wings when he reached puberty – not so in the Ultimate universe. As their son was born with an obvious mutation, Warren’s disgusted millionaire parents let their son be raised by their staff, while they lived elsewhere. Eventually, they put him into the care of Xavier’s School, essentially disowning him in the progress. Warren wasn’t particularly interested in joining and loathed the attention by the media. Storm, to whom he felt attracted, managed to talk him into returning to the team and talk to the media. After starting a relationship with Dazzler, Warren briefly started taking the drug Banshee that pushed his powers to their limits, causing him to look like a humanoid eagle. After being forced to stop, he reverted back to normal and was still allowed to remain with the X-Men. When Magneto launched his Ultimatum wave on New York, Dazzler was killed, despite Warren saving her from the water. After finding more of their own dead, the remaining X-Men led an attack on Magneto’s base but Warren was quickly killed by Sabretooth.