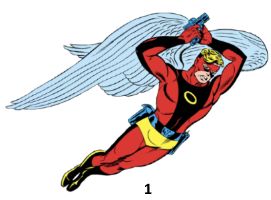 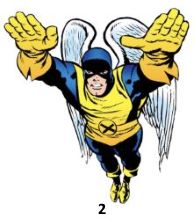 1) Upon growing his wings, Warren decided to become a superhero and called himself the Avenging Angel. He created his own costume, which included a stun gun. The suit was predominantly red, with a open-scalp face mask, yellow trunks and a yellow halo on his chest. [X-Men (1st series) #55 backstory]

2) Like the other original X-Men, the Angel was given a standard training uniform by Xavier. Teh blue uniform included yellow trunks, gloves, boots, and a yellow stripe down the front. He hid his face in a full blue cowl. [X-Men (1st series) #1] 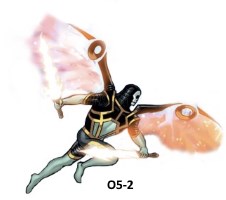 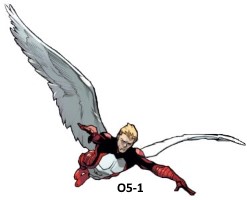 O5-1) Angel and the original five X-Men received new team costumes while in the future. Angel's suit matched the rest of the team, with red accents for the flexible armor of his uniform. He wore no mask or cowl, and had his wings flying free on his back. [All-New X-Men (1st series) #18]

O5-2) After submitting to the Black Vortex, Angel was reborn in a more powerful armored form. His all-encompassing suit had ornate gold striping across the black and white metal. A removable death's head mask made up the front of his helmet. His wings were now composed of a form of celestial fire. [Legendary Star-Lord #9] 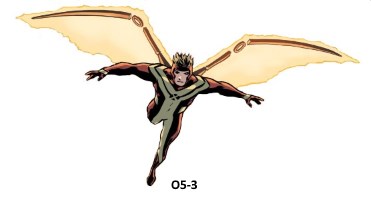 O5-3) Angel's next costume was bright yellow in the center portion, with red down his arms, collarbone, headpiece and the outside of his legs, along with red boots. He wore a slightly different, redder costume while hunting with his wings. [All-New Wolverine #1]

O5-4) Angel wore a predominantly red suit next, with white striping down his legs and a white plate on his chest with a red 'X' on his left breast. Curiously, it also seemed to take some design cues from the Horseman Archangel's costume as well, particularly the styling on the sides of his ribs. [X-Men: Blue #1]

--) Jean Grey later redesigned the training uniforms and, while hers changed into a more “female” version, the ones of the male X-Men more or less stayed the same. She only added a red belt for them and the yellow shirts were no longer covering the entire upper body. [X-Men (1st series) #27] 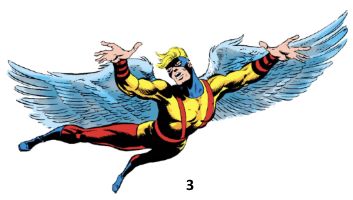 3) After the team had proved themselves in battle time and again, Xavier rewarded them with the right for individual costumes. This set was again designed by Jean, whom Xavier had secretly told of this plan before. [X-Men (1st series) #39]

--) Outraged by how bad mutants were portrayed on TV and disagreeing with Cyclops‘ leadership, Warren temporarily returned to his Avenging Angel alias and costume. [X-Men (1st series) #60] 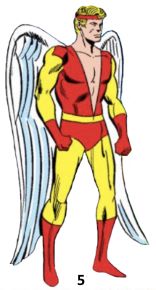 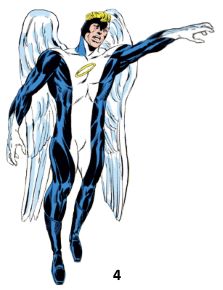 4) After a battle, Warren was found unconscious in the Savage Land and given this new suit by a mysterious benefactor, who was none other than Magneto. [X-Men (1st series) #62] It was only later discovered that the costume was slowly leeching off Warren’s mutagenic energies for Magneto to use. [Avengers (1st series) #111] With the equipment disabled, Warren continued to wear the outfit.

5) When both of Warren’s parents died, he no longer saw the need for a secret identity. When he founded the Champions he wore a new costume that no longer hid his face. [Champions (1st series) #1]

6) Shortly before the Champions had their first press conference, Warren’s costume was torn in a fight. His agent tried to replace it but, by accident, he came up with a version of the Angel’s former costume and the colors were wrong too. [Champions (1st series) #8] As time was of the essence, Warren had no choice but to wear it, and eventually came to like it. While he was serving the Champions and later on helping out the X-Men, he wore the outfit with yellow gloves and boots. The version presented here (white gloves and boots) is from his days among the Defenders. 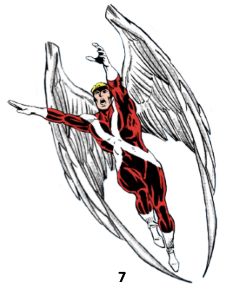 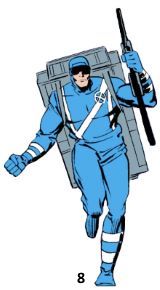 7/8) Long months later, when the original five X-Men reunited, they came up with the idea of X-Factor. To the media, they acted as a mutant hunting group, while secretly they were trying to help mutants to handle their powers. Warren wore a backpack that to the public seemed like an important piece of equipment, while actually it was meant to hide his wings. In situations that required the use of their powers, the team used the cover identities of the X-Terminators along with a new set of costumes. [X-Factor (1st series) #1] 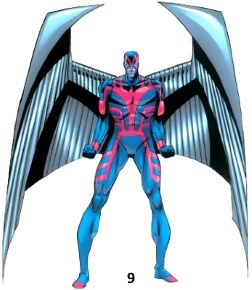 9) After his wings were amputated, Warren was kidnapped by Apocalypse, who remodeled the mutant in his own image. Warren’s skin turned blue and he was given metallic wings to replace his old ones. While serving as the Horseman, Death, he wore a metallic helmet resembling a skull. [X-Factor (1st series) #23] Once Warren broke free from Apocalypse, he rejoined his teammates and soon was named Archangel. He continued to wear the blue and purple costume for quite some time 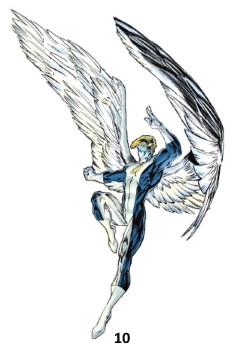 10) Only several weeks after Warren had fully come to terms with the changes forced upon him, by then being already back with the X-Men, he started to wear his old halo costume again. There were some minor modifications such as the white panels stretching all the way down his legs. After a while he introduced a red version of this uniform and alternated between wearing the red and blue costumes.  [Uncanny X-Men (1st series) #319] Surprisingly, his feather wings grew back underneath the metal ones not much later. [Uncanny X-Men (1st series) #338]

11) Warren later retired from the X-Men to care for his injured lover Psylocke and to devote more time to Worthington Enterprises. He only helped out the X-Men from time to time, but when they adopted some sort of team look, he went along with the change. Each costume had a big X across the chest area and Warren’s version was made of some form or armor. [X-Men (2nd series) #101] 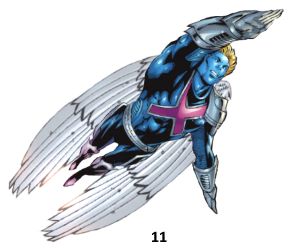 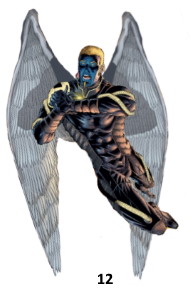 12) By the time Archangel fully returned to active duty, the X-Men no longer wore bright costume, but were using some leather outfits that almost look like street clothes. The members had a vast supply of different shirts, coats and jackets from which to pick. [Uncanny X-Men (1st series) #394] 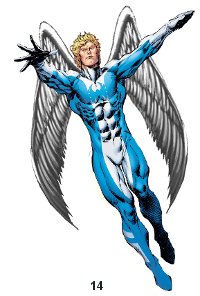 13) An encounter with Black Tom, who tried to suck the life out of him, nearly cost Warren his life. Strangely though, it caused him to manifest his secondary ability of healing and his skin tone returned to his usual color. Maybe as a representation of this “rebirth,” Archangel settled for an entirely new look. [Uncanny X-Men (1st series) #412, 415]

14) After leaving the X-Men and setting up Mutantes sans Frontiers, Warren returned to his old blue and white look but replaced the halo symbol on his chest with some blue wings instead. [Excalibur (3rd series) #11] 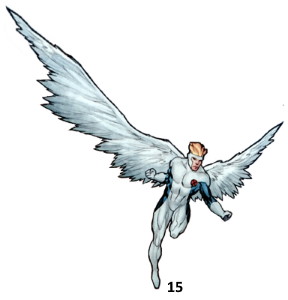 15) When the X-Men reformed in San Francisco, Angel altered his traditional blue and white costume slightly. The white panel was now a bold straight line down the center of his body, whilst the blue was confined to his arms and his sides. Like the rest of the X-Men, he wore a large red X on the left side of his chest. He continued to wear this when operating on the main X-Men team after his transformation into Archangel. [Uncanny X-Men (1st series) #500] 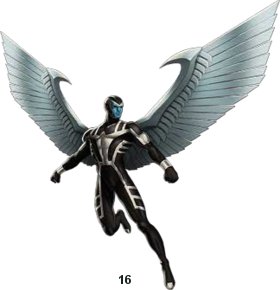 16) When Warren turned into Archangel once more, he developed the ability to manifest an organic costume with a mere thought. Reminiscent of his original Death look, the color palette was comprised of dark grey, black and silver, as opposed to bright blue and purple. His metal wings returned once more and his skin turned blue whenever he shifted into his Death form. [X-Force (3rd series) #5] 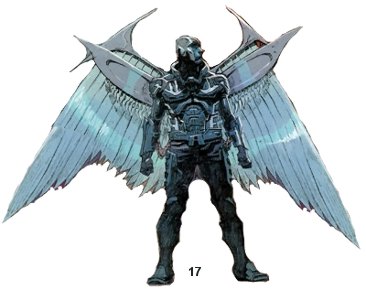 17) After Warren gave in and embraced his Death personality, his costume changed slightly and it now had elements of Apocalypse’s costume within it. Still keeping the silver and grey design of his usual Archangel look, he had a large collar circling his neck, a letter “A” on his belt and Apocalypse’s signature pipes on his arms. His whole uniform was a lot more armored though and he often wore his wings so that they acted almost like a cape. [Uncanny X-Force (1st series) #13] 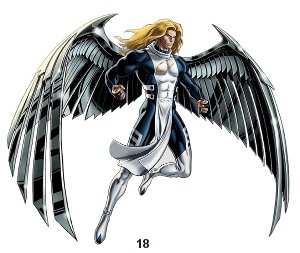 18) When Warren was reborn from the life seed’s energies and he joined the Jean Grey School, he stuck to his signature colors of blue and white. His uniform looked very similar to his San Francisco look but there was a piece of white fabric hanging from his waist and he constantly sported his metal wings. [Avengers vs. X-Men #4]

--) When Angel and Archangel separated and then merged together once more, Warren began wearing the traditional Archangel costume again, which he wore during his X-Force days.

19) As one of the Horsemen of Salvation, Warren was reprogrammed by the Lifeseed enhanced powers of Nathaniel Grey. He was permanently in his Angel form, having been cured of his Archangel side. This look included a bare chest with one shoulder epaulet and a blue & purple robe below the waist. [Uncanny X-Men (5th series) #3]