2) This is the first individual costume Aurora wore. Her twin brother, Northstar, had a similar outfit, though his star was on his right hip. When standing next to each other, the stars on the twins‘ hips connected into one image - a symbol of their shared power to generate brilliant light. [Uncanny X-Men #121]

3) In order to strengthen the “Aurora” side of her psyche, and to set herself apart from her brother, Aurora designed this rather revealing costume for herself, leaving her legs and her shoulders bare. The boots, short gloves and earrings were in a matching color. [Alpha Flight (1st series) #18, 20] Sometimes, Aurora wore a blue scarf along with this costume, though it was rather impractical, and at least once a villain tried to strangle her with it.

4) When Alpha Flight’s adventures took then to the northern regions of Canada, Aurora wore this “winter” costume. Whereas the main function of the lavender body-suit suit was to protect her from the cold, Aurora made sure that the white ornamentals on it emphasized her natural “assets.” [Alpha Flight (1st series) #37] 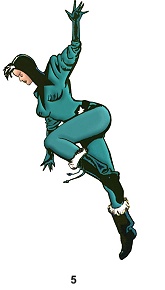 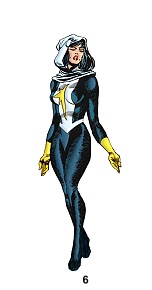 5) In what would be Aurora’s last mission with Alpha Flight for quite a while, she wore this second winter costume. Mostly of dark green color, the most outstanding aspects were the puffed sleeves, the fur-trimmed boots and the black headpiece that covered almost her entire head and connected to the black star around her neck. The black belt with the small white star symbol indicated that the twins had grown closer again, this being the color scheme still worn by Northstar. [Alpha Flight (1st series) #50]

6) This uniform of Aurora was strongly inspired by her days as a nun, as is apparent in the white- and black color scheme, and the removable hood. The logo on her chest could be seen as either half a star - symbolizing Northstar having shared his powers with her - or a sideways sunrise. After all, in Greek mythology, “Aurora” is the goddess of the red-lit sky at dawn. The yellow gloves were in the same color as the chest logo. [Alpha Flight (1st series) #87]

7) By the time Aurora rejoined the team after her ordeal with Headlok, Alpha Flight had donned team uniforms for the first time. The uniforms were red and white tight-fitting spandex with a Mapleleaf design on them. [Alpha Flight (1st series) #104]

8) Her working clothes as an operative of the Weapon X program were almost like street-clothes. Aurora could have worn them in public without sticking out too much. It was black leather pants and boots, a short white top, leaving her midriff exposed, and a black leather jacket with broad white trimming. [Weapon X (2nd series) #1]