The life of Jeanne-Marie Beaubier started with tragedy, as soon after her and her brother Jean-Paul’s birth, their parents were killed in an accident. The twins were brought to their mother’s cousins, the Martins, but they could not afford to adopt both children, so they arranged for Jeanne-Marie to be raised at the nearby Madame DuPont's School for Girls, which was government subsidized. As the Martins soon moved away because of a job offer and died in another accident a couple of years later, the twins grew up separate and unaware of each other. [Alpha Flight (1st series) #10 backstory]

Run by nuns, DuPont's was one of the last schools of its kind, staunchly clinging to the harsh ways of another century. Possibly because of her pointed ears, the headmistress, Sister Anne, thought that Jeanne-Marie had the look of the devil about her and would often pick on her, cruelly punishing her for every minor disobedience. Jeanne-Marie grew up to be nervous, introverted and terribly shy. She felt unwanted and alone, and by the time she was thirteen years old, her only thought was to escape from this life by any means. One night, she sneaked into the school's attic, opened a window and walked out on the roof. She jumped off, intending to kill herself, only - before she hit the ground - her mutant powers kicked in and she flew. 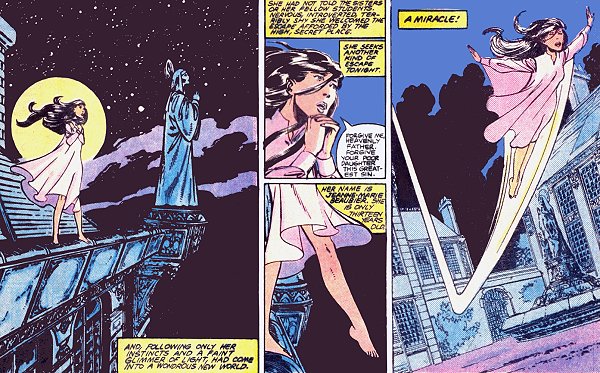 Within seconds, she found herself miles high in the sky, observing the city lights of LaVelle, Quebec, down below. Considering her gift a miracle, she returned to the school and made the mistake of telling Sister Anne about it. The nun considered Jeanne-Marie's story blasphemy and punished her again. It didn't end with being beaten up by the nun, as Jeanne-Marie also had to pray in the chapel for hours while the other girls were having their evening meal. 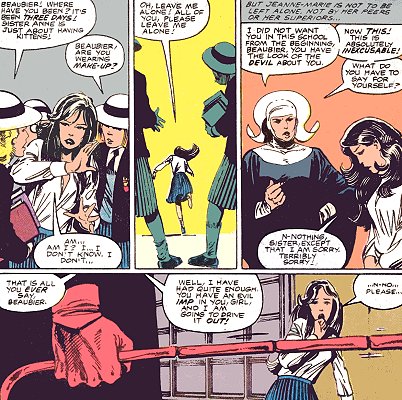 Already weakened by the constant struggle of her upbringing, Jeanne-Marie's fragile psyche cracked under the strain. That night, a second personality emerged, one that wouldn't obey to the rules of DuPont's and who would use her newfound powers to escape. Three days later, Jeanne-Marie returned to school, disoriented and confused. She couldn't explain where she had been, nor why she was wearing make-up, something that was also not allowed by the nuns. Naturally, she received another punishment and, from then on, Jeanne-Marie played along the rules, keeping her other self bottled up. In fact, she suppressed her wild, free side so much that she became as cold, stern and controlled as the nuns themselves.

Five years later, Jeanne-Marie graduated from school and because of the "good progress” she had made ever since "that unfortunate incident" back then, Sister Anne accepted Jeanne-Marie's application to join the teaching staff. She was shown to her room but, once she was left alone, it took just one careless moment for Jeanne-Marie's other side to come out again. Relieved to have reached her goals, Jeanne-Marie's eyes met the mirror on the wall, with the woman looking back at her asking if this was really all that she could dream of and enough for one who could fly.

Within the hour, Jeanne-Marie was at one of Montreal's hottest nightclubs, dancing, flirting and enjoying herself. When she took a stroll through the city, she also ventured to some less desirable areas, where she was met by two muggers. She knocked out one of them with a super-fast punch and, before she could engage the other in a fight,  unexpected help arrived in the form of a governmental agent, codenamed Wolverine. He had recognized something odd about Jeanne-

Marie and followed her for several blocks until she got into trouble. Logan explained Canada's plan to have their own super-powered operatives to Jeanne-Marie, and invited her to accompany him to the headquarters of Department H in Ottawa. [Alpha Flight (1st series) #9 backstory]

Like every other candidate of the Flight Program, Jeanne-Marie underwent several tests, both physical and psychological ones, but the rift between her two personalities was so complete that James Hudson and his staff did not discover her dissociative identity disorder at first. It was Hudson's wife, Heather, who first recognized Jeanne-Marie's uncanny resemblance to Olympic ski champion Jean-Paul Martin and, doing further research, they uncovered the birth and adoption records proving them to be twins. Jean-Paul was invited to join Department H as well and, even though he had no intention of  working for the government at first, he changed his mind after being introduced to his twin sister. Shaking hands, the siblings discovered that they possessed one

more ability - to generate a brilliant dazzling light upon physical contact. The twins received the codenames Aurora and Northstar. By the time Jeanne-Marie's multiple personality disorder was diagnosed, it was decided that she was already too far ahead in the Flight Program to expel her, besides, being with her brother seemed to have a stabilizing effect on the "Aurora" identity of her psyche. [Alpha Flight (1st series) #3, 10 backstory]

During the time they were still in training, Aurora started a romantic relationship with her teammate, Walter Langkowski, aka Sasquatch, though they kept it secret from the rest of the group. Several months later, Alpha Flight was ready for their first mission which, ironically, was to hunt down one of their own - Wolverine, who had defected and joined the American X-Men instead. Alpha Flight did hold their ground in this first battle, but they caused much destruction in Calgary. Although they managed to capture Logan, he quickly escaped again. Ultimately, the government decided to finally let him go, as they were beginning to fear that they could not afford an official superhero team and the damages caused by their battles. [X-Men (1st series) #120-121]

A few weeks later, Department H was closed down and their operatives had to go back to their former lives. Aurora reverted back to her repressed "Jeanne-Marie" mode and returned to full-time teaching at Madame DuPont's school for girls, like she had originally planned. When Jean-Paul dropped by for a visit, he was shocked by the change in his usually free-spirited sister. Making fun

of the pair of glasses and the prissy clothes she was hiding behind, and forcing her to look at herself in a mirror, Northstar managed to snap her back into Aurora. Together, they answered a call from the Hudsons, who had decided to keep Alpha Flight running even without governmental funding. [Alpha Flight (1st series) #1]

While the team tracked down their missing teammate, Marrina, to the Master's base, Aurora became separated from the rest of Alpha Flight, including her protective brother. She became trapped between moving bars, more and more of them closing in on her until she was not able to move anymore. By the time she was freed by Sasquatch, she had already retreated into the "Jeanne-Marie" persona, worrying her lover to a great degree, as he didn't know this aspect of Aurora. James Hudson had no choice but to reveal Jeanne-Marie's psychic status to the

concerned Sasquatch, including that the “Jeanne-Marie” persona despised the happy-go-lucky “Aurora” and wanted nothing to do with Alpha Flight, or Walter. Sasquatch still tried to get through to her, but with no success. While she did remember the intimacy they had shared, she remembered as "Jeanne-Marie" and angrily lashed out at Walter. After the mission was completed, Northstar took his sister away and Walt returned to his various scientific projects that he still had going on the side. [Alpha Flight (1st series) #3-4]

Northstar didn't approve of her relationship with Sasquatch at all, and had Jeanne-Marie accompany him to Montreal, where he made her see a psychiatrist. However, as she didn't switch personalities during the session, the doctor could not diagnose her dissociative identity disorder afterwards, and even suggested that it was Jean-Paul who was having issues, him not willing to accept his sister the way she was. While Northstar wondered how to make the doctor see his sister's troubles without compromising their secret identities, the psychiatrist also warned that, even if she did suffer from a split-personality, he could not simply cure her and erase one identity. Any attempt to help such a patient would probably form a third personality, unlike either of the former two.

Barely having left the praxis, an attack of a purse-snatcher once more triggered Jeanne-Marie's transformation into Aurora. As they already happened to be in the neighborhood, Northstar took his sister to Raymonde Belmonde, a childhood mentor of his. Jean-Paul’s old friend introduced them to his daughter, Danielle, whose existence had only recently been revealed to him. Suddenly, the friendly reunion was interrupted by a criminal called Ernest St. Ives. As Raymonde had refused to sell his café, the gangster brutally killed him and also made a show of attempting to kidnap his daughter as well. Yet, as he had never seen the woman before, he accidentally kidnapped Aurora instead. [Alpha Flight (1st series) #7]

Northstar managed to track them down and was joined by a strange heroine called Nemesis. Together, they battled their way to St. Ives and found Aurora unharmed, sitting on his desk. After Nemesis had effectively dealt with the villain, Aurora revealed that Danielle had been his silent partner in the murder of Raymonde, which also explained why he had not harmed Aurora, as he thought her to be Danielle. Northstar was relieved. He admitted that he had suspected that his sister had romanced herself to safety, much to Aurora’s shock. Outraged, she ended their partnership and never wanted to see her bother again. [Alpha Flight (1st series) #8]