Jeanne-Marie Beaubier found peace for the first time in her life, and eventually decided to join the convent as a nun. Over time, her memory of her time with Alpha Flight returned. When Jeanne-

Marie  learned from the news of court hearing over the Langkowski fortune, during which Sasquatch unsuccessfully tried to convince the judge that she was Walter Langkowski reborn as a woman, Jeanne-Marie dropped by for a visit and helped to ease her former lover’s suffering. [Alpha Flight (1st series) #64]

[Note: Actually, in the issue, Aurora uses her light powers to aid Sasquatch in an attack of the Great Beasts, however, this is definitely an error, considering that she was written as powerless before and after this incident.]

Several weeks later, her superiors in the convent told Jeanne-Marie that they considered her presence to be a danger and asked her to leave. Although it had yet to occur, they feared that one of Aurora’s former villains might come looking for her.  Jeanne-Marie’s protests that she had left this life of pain and violence behind her when she entered the order became futile when the 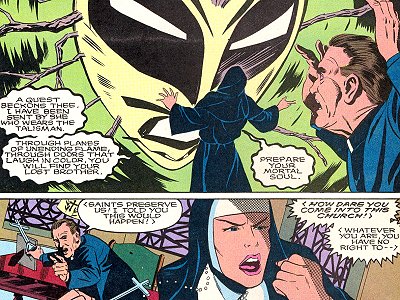 discussion was interrupted by the appearance of some magical spirits, transporting Jeanne-Marie away. It was the doing of Talisman, who sent Jeanne-Marie to Asgard, along with Purple Girl, Laura Dean and Goblyn. Turned out that Loki had been lying about the twins Asgardian heritage, for when Northstar had arrived there the elves had laughed at him for believing Loki’s fairy tale. Even worse, after being trapped there for months, Northstar became captured by a group of trolls, who intended to sacrifice and eat him. Fortunately, the still powerless Aurora and the Beta Flight girls arrived in time to rescue him, and they were all returned to Earth, where Talisman filled them in on Alpha Flight’s imminent battle against Llan the sorcerer, for which she had tracked down all available former members. [Alpha Flight (1st series) #81-82]

Talisman was right with her prediction, as, when Llan’s forces invaded Earth, the odds were overwhelming. Not only Alpha Flight and its trainees, but also the newly-formed Gamma Flight entered the fight. Jeanne-Marie, too, accompanied them, despite her powerlessness, but she claimed that, like every other Alphan, she was trained in hand-to-hand combat and able to hold her ground. Yet, against demons twice her size and much stronger than her, fighting techniques were pretty useless and, soon, Jeanne-Marie was about to end up as “fresh meat.” Northstar immediately rushed to his sister’s side and protected her. He then got an idea: since she had

sacrificed all her power to him, maybe he could give some of that back to her and, surprisingly, it worked. Sharing the powers, Aurora’s abilities were fully restored and, touching each other, brother and sister again created their brilliant light effect. The demons feared this living light, providing Talisman with some extra time in battling Llan. She told the speedsters to enlist Dr. Strange's help and, with his magical powers added to her own, the demonic invasion was finally avoided. [Alpha Flight (1st series) #84-86]

At first, the twins‘ powers seemed to have returned to their original status. However, over the long phase of dormancy, Aurora’s power apparently had further evolved. Still able to generate light on her own,  she now manifested it as a life-energy based light, using it to heal, to hypnotize or to 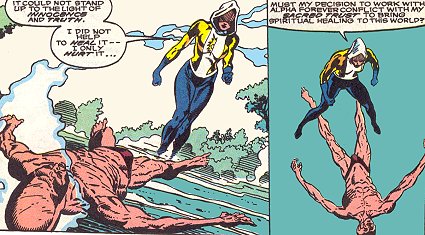 empathically affect others. Actually, it’s quite possible that the twins’ light always had such capabilities, and that Aurora was only accessing them now, for at this point in her life, Jeanne-Marie was living by an inner desire to heal rather than hurt. This first became apparent when she and a few other Alphans rescued Puck from the Master’s base and had to confront many hideous creatures along the way. These opponents not responding to Aurora’s attempts to calm them, she had no other choice but to use violent force, and was left wondering if her membership in Alpha Flight would always interfere with her personal beliefs. [Alpha Flight (1st series) #88-90]

When the Fantastic Four investigated some odd energy readings emanating from the Yukon area, they asked Alpha Flight to team up with them. The heroes split up into two groups, Aurora being part of the one who reached the area first and found an entire town under the mental hold of the deranged powerful telepath called Headlok. One by one, he wormed his way into the heads of the heroes, taking a special interest in Aurora’s unique psyche when it was finally her turn. Using her healing light on the villain, Aurora even temporarily affected him, making him see some painful truth about himself, before she too succumbed to his influence. Later, the Human Torch tricked Aurora into using her cleansing light on herself, allowing her to break Headlok’s hold, and, after she had freed the other heroes, the villain was quickly subdued. [Alpha Flight (1st series) #93-94] 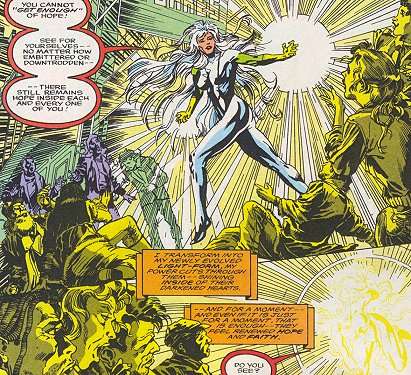 Still, the incident caused Aurora to further question her role as a superheroine, and she sought comfort in a nearby church. The priest that she confessed to helped Jeanne-Marie to realize how she could contribute to the Flight program without resorting to violence and, in the next team meeting, she filled in the rest of Alpha Flight in on her decision. She resigned from active duty and was given Gamma Flight status, opting to use her light powers to work with the psychiatric counseling unit for Department H’s incarcerated prisoners. [Alpha Flight (1st series) #95]

Not much later, while Aurora and several members of Beta Flight were watching over the comatose Laura Dean, Canada faced an alien invasion. Alpha Flight called in all the reserves and trainees but, right then, Laura awoke and, in her confused state, she teleported everyone in the room away. Aurora was believed to have been among them, but actually she had left at super-speed a few split-seconds before. She wanted to join Alpha Flight fighting the aliens outside the building but, on the way out, she passed the cell block and was hit by a psi-wave. Headlok’s power-dampeners had been fried by the psychic backlash caused by the pain caused by the alien’s battle with Alpha Flight, and he lured Aurora into his cell without anyone noticing. [Alpha Flight (1st series) #98, 104]

Unnoticed by the staff, Headlok kept Aurora hidden for weeks and enjoyed mentally torturing her. When Alpha Flight eventually discovered their missing teammate, the glowing Aurora floating in a trance-like state with Headlok drooling over. They dared not to severe the mental connection 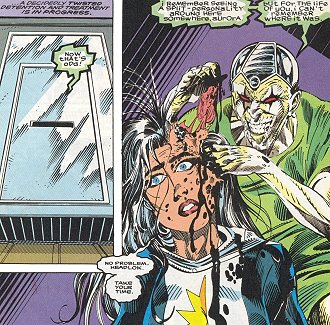 between the two, afraid of the consequences. Entering her head, Headlok re-shattered Aurora’s psyche into her many former incarnations - suicidal teenager, happy-go-lucky, heart-breaker, nun and healer; they were all mere playthings for Headlok. Cruelly, he played the role of Sister Anne of Madame DuPont's School, punishing the teenage version of Aurora over and over again, trying to break her spirit. However, Headlok made the same error like many before him, considering her multiple personality disorder a weakness. Turned out, Aurora could also draw strength from numbers, as from the farthest recess of her mind, the cold, stiff “Jeanne-Marie“ personality resurfaced and she accomplished alone what before had taken the combined effort of Alpha Flight and the Fantastic Four. She defeated Headlok by causing her cleansing light to erupt from within the villain’s body, tearing him apart.

Following the encounter, deeper examinations revealed that Aurora’s mind had returned to it‘s original spilt-personality, though now both personalities both could wield the body’s mutant powers. They jointly took one of the empty spots on the team’s active roster, left open because of Box and Diamond Lil’s getting married. Although Northstar was not sure of this decision, he was happy to have his sister back - both of her. "Jeanne-Marie" was now a willing participant in Alpha Flight alongside Aurora, whereas before "she" had shunned super-heroics. [Alpha Flight (1st series) #102-104]

As the switches between “Aurora” and “Jeanne-Marie” occurred quite often and without warning, it took the rest of Alpha Flight a while to  adjust to their teammate’s new status, especially as many 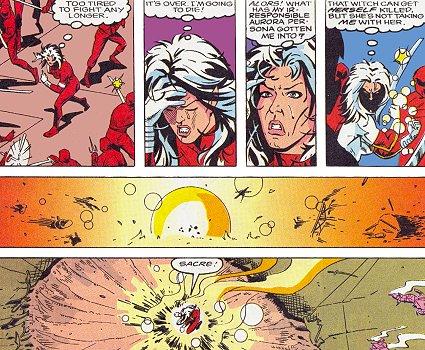 of them had not interacted with “Jeanne-Marie” on a regular basis before. However, quite surprising, many Alphans found her to be the easier one to get along with, as “Aurora’s” irresponsible and flirtatious nature would stir up trouble from time to time. The different personalities were accompanied by changes in her body chemistry as well. For example, Wolverine was able to tell “Jeanne-Marie” and “Aurora” apart by scent. More importantly, the two also used their light powers in different ways. Whereas “Aurora” used it to influence others or to merely illuminate, “Jeanne-Marie” found that she could use the light in an explosive manner, like force-blasts. [Alpha Flight (1st series) #105-111]

Curious about these differences, Sasquatch ran a few tests on Aurora, feeling responsible as he was the one who had  originally altered Aurora’s genetic structure. Since he had magically 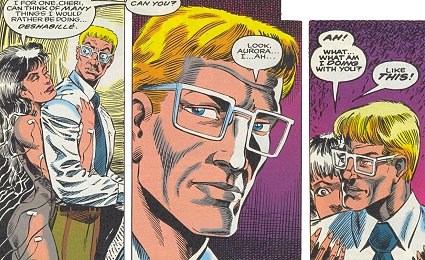 transformed back into a man some time ago, “Aurora” even made a pass at Walt during the medical examination, only to change into “Jeanne-Marie” moments later, who was rather disgusted. This side of her personality was still guided by strong religious believes, and as such she had also some problems with Northstar publicly outing himself as homosexual. [Alpha Flight (1st series) #114]

Not much later, a newly-born Goddess set out to reorder the universe in her spiritual order, psychically approaching superheroes all over the world to join her in the Infinity Crusade. Only people with a special religious faith had been affected, but with “Aurora” being the dominant identities at the time, she was not among the few Alphans to accept the Goddess’ invitation into her paradise. However, later, when Alpha Flight conversed with other hero teams such as the Avengers, the Fantastic Four and the X-Men, she switched personalities again, and as “Jeanne-Marie” she heard the Goddess’ call, allowing Reed Richards and the others to follow her and learn the exact location of the Goddess’ lair. Later on, during the heroes’ battle with the Goddess, Shaman freed “Jeanne Marie” and the other Alpha Flight members from her mental influence. [Infinity Crusade #2, Alpha Flight (1st series) #127]