Having nowhere else to turn, Aurora moved in with Walter in his apartment in Vancouver. She kept true to her word, as during the next missions of Alpha Flight, she refused to address her brother or respond to his pleas for forgiveness. Not even the apparent death of Alpha Flight’s founder and leader, Guardian aka James Hudson, changed that. [Alpha Flight (1st series) #10, 12]

For a few weeks, Aurora lived happily with Walter, and she let down her guard again. One morning after taking a shower, she wiped the mist from the mirror and found "Jeanne-Marie" looking back at her, quite furious and demanding to be let out. To Aurora, it even seemed as if her other self was reaching out of the mirror and, terribly frightened, she cowered next to the toilet,

feeling her grip on sanity weaken. After the moment had passed, she knew that she had to look into the mirror again, and found "Jeanne-Marie" gone - temporarily. To keep it that way, Aurora decided she needed to something to re-affirm herself and to lock away her other self, which is why she gave herself a new hairdo and designed a revealing costume.

Additionally, in order to further distance herself from Northstar, she had Sasquatch use his scientific prowess to alter her powers,  which he somewhat reluctantly did. He saw to it that, after 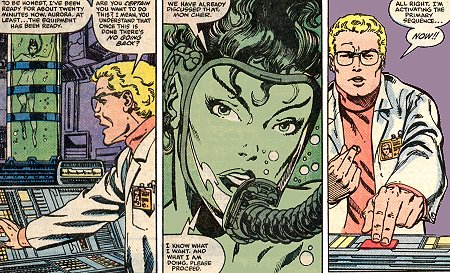 the experiment, Aurora would no longer be recognized as a mutant. Although no longer as fast as before, nor as resilient to wind or cold, she could now generate light on her own, granting her the wish to be truly independent from her twin brother. However, the tampering with her DNA would have serious consequences for her and Northstar at a later point [Alpha Flight (1st series) #14-15, 17]

Along with her new look came a very flirtatious attitude, which Walt wasn’t happy about, for example when she kissed a construction worker right in front of him. One day after their argument, the young couple embarked on a trip together to check out Tamarind Island. Walter had inherited the island and the mansion that came along with it, which used to belong to a great-aunt of his, 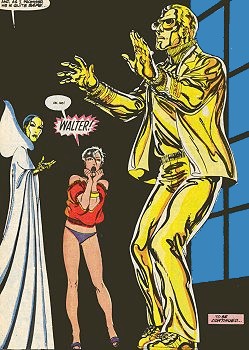 and he considered it to be a good place for Alpha Flight’s new headquarters. While exploring the mansion, Walt and Aurora became separated, and she ended up in an entirely dark room. As it turned out, Aurora had an irrational fear of the dark, due to the many times she had been locked away in the attic or the basement during her childhood. She was so immobilized with fear that the fact that she was now able to generate light on her own simply eluded her.

Sensing “Jeanne-Marie” trying to take over, Aurora struggled hard for dominance but put up no resistance when she was captured by Gilded Lily, Walter’s great-aunt, who was still alive through means of her skills in alchemy, which she had been taught by Diablo. She had transformed Walter into gold and, yearning for a new body, she proceeded to transport her consciousness into Aurora’s. Fortunately, Walt managed to break free from the gold by turning into Sasquatch, and he went about demolishing Gilded Lily’s lab, apparently killing her in the process. After rescuing Aurora, Walt sure noticed a change in his lover's behavior, which he considered to be a possible third personality emerging. On the way home, Walt tried to comfort Aurora and started to kiss her, but she only became confused and scared of him. Her head pounding, she closed her eyes and, when she next opened them, she was flying high in the sky and had switched to "Jeanne-Marie" again.

Not touching ground for three days, she flew to Quebec to see her brother, who was rather startled, as “Jeanne-Marie” had never accessed Aurora’s powers before. Thinking this the perfect chance to make up with his sister,  Jean-Paul did not alert the concerned Walt to her whereabouts. The next day, he took Jeanne-Marie to Clementine D’Arbanville, an old friend from 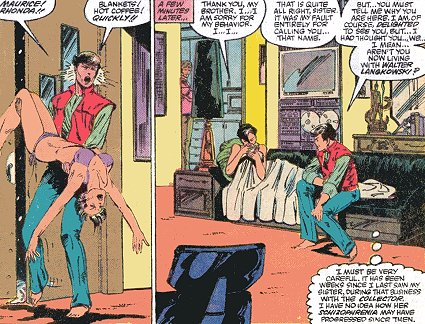 his circus/terrorist days. Actually, Clementine had some problems, as her circus had been slowly infiltrated by Pink Pearl and her operatives. The obese woman had been hired to assassinate Canada’s prime minister and the US president during a secret meeting. Knowing of Clementine’s terrorist past, Pearl had chosen to launch the bomb from the circus so that the Separatists would be blamed for the murders. During the crisis, “Aurora“ awoke and, together, the siblings handled the danger. However, now aware of Northstar's terrorist activities in the past, she threatened to tell the rest of Alpha Flight about it, before returning to her lover Langkowski again. [Alpha Flight (1st series) #20-22]

When Alpha Flight was called next into action, they teamed up with the X-Men to investigate some odd occurrence at Ungava Bay. Once there, they were greeted by a group of humans who had all received godly powers, including Madelyne Pryor, now calling herself Anodyne. Demonstrating her newfound healing abilities, she cured Sasquatch of the bestial rages that had plaguing him recently, and also fused Aurora’s scattered personalities together into a single identity. However, as the X-Men and Alpha Flight soon learned, the Norse god, Loki, was behind the gifts that Madelyne and the others had received, and these gifts came with a price. In return, the world was purged of all magic, causing the predicament of Snowbird or Shaman. Those who had been changed for the better (supposedly) by Loki’s gifts, including Aurora, soon had to battle the few who opposed the “gift.” However, eventually all the heroes realized that the price was too high and the gift was rejected by those who had taken it, including Sasquatch and Aurora, whose psyche became fragmented again. [X-Men & Alpha Flight (1st series) #1-2]

Her turmoil even increased when, not much later, it was discovered that the cause of Walt's rages was his being possessed by one of the seven Great Beasts, Tanaraq. Sworn to defend Earth from the Beasts, Snowbird had no other choice but to engage him in battle, and ripped out his heart out after transforming into an albino Sasquatch.

Naturally, Aurora was angry at her teammate for killing her lover, but she calmed down a bit when Snowbird explained there was a way to still save his soul. In order to do so, Alpha Flight traveled to the Realm of the Great Beasts, where three people representing "power," "love" and "hate" had to perform a certain ritual.  Talisman and Aurora were obvious choices for the first two slots and, against his protests, Aurora nominated Northstar for "hate," as he had never approved of her and 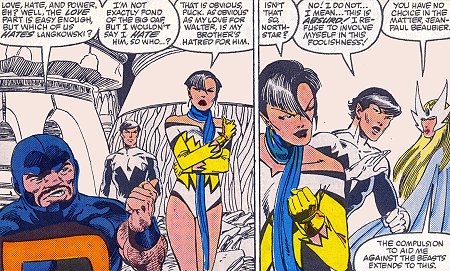 Walter's relationship. With Walter’s spirit aiding Alpha Flight, they eventually succeeded in their mission and returned home, only to discover that, in the meantime, his body had crumbled to dust and was beyond repair. A new body was needed to house Walt’s soul, which was at least temporarily found in the form of the Box armor conducted of “living metal,” that quadriplegic Roger Bochs had built for himself. [Alpha Flight (1st series) #23-24]

Following this incident, Aurora told the rest of Alpha Flight about her brother’s terrorist past and the matter was vividly discussed. Yet before any decision was reached, the team was again called to an emergency and the subject was dropped. [Alpha Flight (1st series) #25] 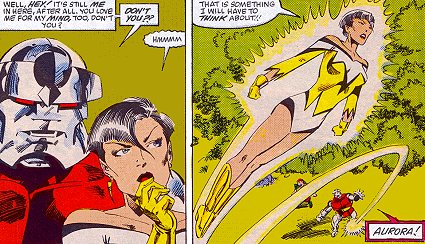 Although overjoyed to have Walter back, it was quite obvious that, sooner or later, Aurora would turn away from a man trapped in a robotic hide, as he couldn't satisfy her physical needs. With the help of fellow scientist, Roger Bochs, Walter located a strong humanoid body in another dimension and pulled it to Earth - only to discover that it was the Hulk. Walter could not bring himself to take over the body of his friend Bruce Banner, so his soul became lost between dimensions.

Seeing her lover apparently die for the second time, Aurora was in tears and Jean-Paul comforted her. When he too started crying, Aurora realized that he had not hated Langkowski as she always 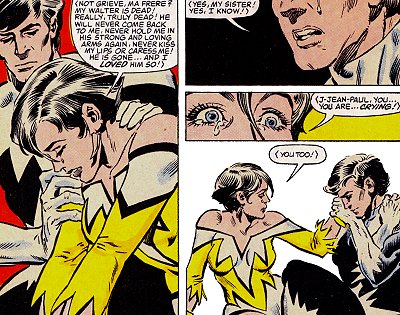 had thought, but that he must have had deep feelings for the man as well. Despite their loss, the team still had to deal with the Hulk, who started to rampage in the middle of Vancouver. Seeing all their teammates defeated, the siblings decided to try to blind their opponent with their dazzling lightburst. However, upon touching each other - the desired result did not happen. Instead, the twins‘ touch now temporary negated each other‘s powers, an unexpected side effect of the DNA modification that Aurora underwent. Fortunately, the Hulk was driven off otherwise and he returned southwards to the US. [Alpha Flight (1st series) #27-28, Incredible Hulk #313, Alpha Flight (1st series) #29]