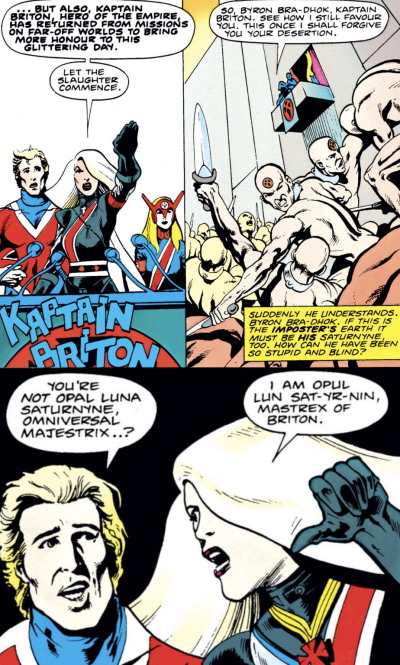 Captain Britain sure was kept busy as, right after the incident with Sid/the Fury, he was accosted by the Technet, a mercenary group similar to the Special Executive. Brian learned that the Technet were after his mystery stalker, an other-dimensional double of him, who had made his way to Braddock Manor while he was busy fighting. Captain Britain faced Kaptain Briton and seemingly won. Actually though the villain had beaten him and exchanged their costumes. The Technet took the wrong Captain back to Briton’s homeworld, where a Saturnyne analogue called the Mastrex Opul Lun Sat-yr-9 ruled a cruel dictatorship and was Briton’s lover. Believing her to be the real Saturnyne at first, Brian wasn’t averse to Sat-yr-9 seducing him. Only the next day, during a slave massacre staged for him, did he learn what kind of person she truly was and demanded the Technet take him home. After a fight with Sat-yr-9’s people, the Technet did that. Back home, Brian found a shell-shocked Betsy, who had killed his counterpart with her psycho-blasting powers when he tried to rape her. [Captain Britain (2nd series) #5-6]

At that point, Mastermind, the Braddock computer, revealed itself proving that it was still mentally independent (though claiming that it was now harmless, as Brian had purged the disturbance that had made it kill before). Mastermind felt that they needed guidance, which is why it informed Brian 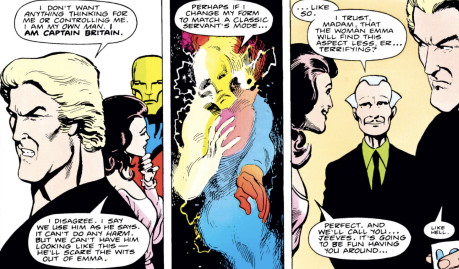 and Betsy that their father was originally from Otherworld and that they had inherited something of his unique nature. Therefore, Captain Britain’s power was genetic in nature. The suit was merely an amplifier. They agreed to keep Mastermind around (Brian rather more reluctantly), though it would have to appear more human as a butler. Although he had mostly ignored her before, Brian also began bonding with his houseguest, Meggan, as she could understand better than the others what it meant to be different. [Captain Britain (2nd series) #7]

[Note: The idea that Brian and Betsy's powers come from unique Otherworld genes hasn't stuck. Betsy's psychic abilities are firmly recognized as mutant powers from the X-Gene while Brian's abilities -- both before and since this issue -- have been shown coming from outside mystical artifacts or direct intervention by Merlyn.]

A little later, they were visited by agents Michael and Gabriel of the RCX, the successor organization of S.T.R.I.K.E. They felt that the nation was in trouble after the Jaspers Warp and wanted both the help of Captain Britain and the use of his computer and headquarters, as they needed a home for the Warpies, children that had become mutated and strange as a result of the Warp. Brian refused first and the RCX had specially trained Warpies attack, only for them to be taken out by Meggan, as she realized her true shape-shifting potential. Brian was more earnest than before against the RCX using Braddock Manor as a base, but Betsy put her foot

down and they were allowed to stay, much to Brian’s dismay. Realizing that Captain Britain would be intractable and an obstacle rather than of assistance, Michael and Gabriel conspired with Mastermind to get the Captain out of the way, intending to use Betsy instead as “their” Captain. A call to a former fellow agent and a little while later, Brian learned that his elder brother, Jamie, had been kidnapped by Doc Croc, the misshapen ruler of the African nation of Mbangi. [Captain Britain (2nd series) #8-9] 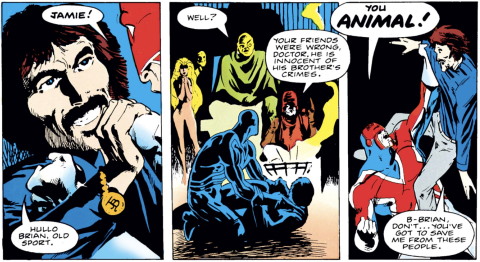 Captain Britain and Meggan flew there but, as Brian tried to confront Doc Croc, he was gassed. In a strange vision, he learned about his brother’s other life: that he had become a poacher, slaver and murderer in Africa to finance his extravagant lifestyle. Disgusted, Brian washed his hands of Jamie, leaving him to Croc’s mercies. Devastated, he admitted to Meggan that he had admired Jamie in the past, before looking for comfort in her arms. [Captain Britain (2nd series) #10] 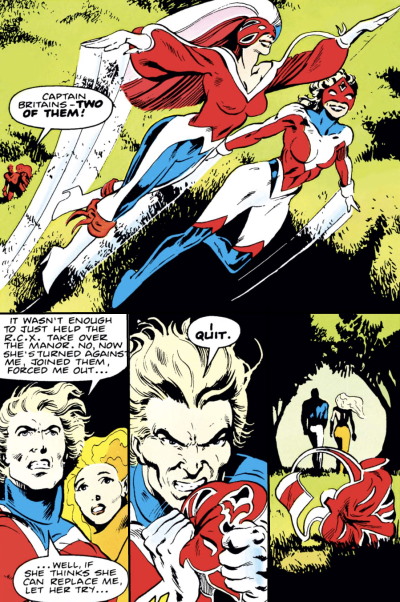 Unwilling to return to the Manor, he traveled around the world with Meggan. They shared several adventures, among them they were kidnapped into the past by Fascination, a member of the Technet, to save the Technet’s leader, Gatecrasher. Eventually, they returned back home, only find that, in the meantime, Betsy, coached by Captain U.K., had taken up the mantle of Captain Britain. Disappointed and angry, Brian announced that he’d quit being Captain Britain. [Captain Britain (2nd series) #11-12]

Brian and Meggan spent peaceful months in a lighthouse purchased with some Inca gold that Meggan had picked up during their adventure in the past. During their joyful time together, Brian became more comfortable accessing his powers without using the amplifier costume. However, one day, he had a vision of being blinded, due to his rapport with his twin sister, Betsy. He followed the rapport to its source: Betsy as Captain Britain was supposed to save some kidnapped children from the Vixen and Slaymaster, who was now also wearing an amplifier suit. Inexperienced, Betsy had failed and her eyes were ripped out by 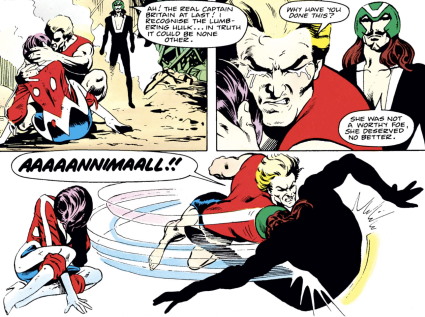 Slaymaster. Captain Britain attacked the assassin and, in a fit of rage, killed him. Afterward, he returned Betsy to Braddock Manor and left with a warning to the RCX agents. He realized that he had no choice but to take up the mantle of Captain Britain again. [Captain Britain (2nd series) #13]

On Christmas Eve, an unexpected guest showed up at the lighthouse. Dai Thomas had guessed Captain Britain’s identity some time ago but wasn’t allowed by his superiors to do anything about it. Swallowing his pride, Dai had come to Brian to ask his help in a strange murder case. Overcoming their mutual dislike, they worked together and found out that the murders were caused by another super-powered Warpie child. Dai Thomas and Brian Braddock ended up at the beginning of a friendship and the Captain now had an easier time working with the police. [Captain Britain (2nd series) #14]

About a year later, a recovered Betsy Braddock joined the X-Men as Psylocke and, when Brian and Meggan came to visit her, they also met the X-Men and the New Mutants. [New Mutants Annual #2, Uncanny X-Men Annual #11] 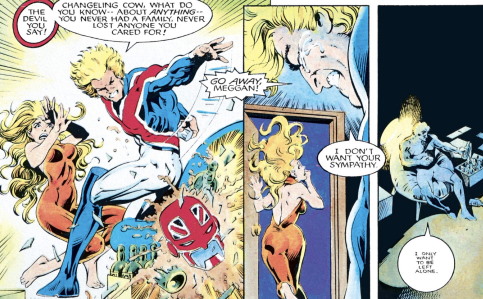 However, only a few weeks afterwards, the mutant team apparently met their death while fighting the Adversary in Dallas. The incident was broadcasted on TV and the world believed the X-Men to be dead. Meggan was shocked when she saw a news report about it and Brian took it much harder, turning to alcohol and saying things to Meggan he would later regret. 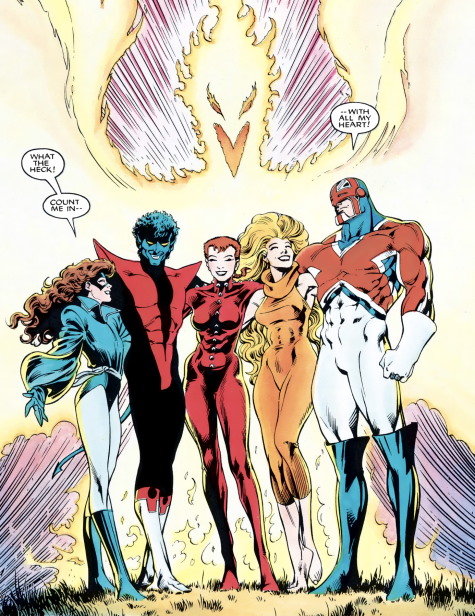 Having nowhere else to turn, Meggan sought help from the surviving X-Men at Muir Isle, Nightcrawler and Shadowcat, who were still recovering from injuries they had recently received. Nightcrawler helped sober up Brian by reading the drunken hero the riot act and dumping him into the ocean – right in time, for all four of them had to aid a returned Rachel Summers, aka Phoenix III, to fight the pursuing Warwolves.

Later that day, the five heroes sat around a campfire and exchanged their memories about the X-Men. Eventually, the others decided to band together as Excalibur to keep the X-Men’s dream alive. Being a loner, Brian was less enthusiastic about the idea than the others but agreed. [Excalibur: The Sword Is Drawn]