Brian was less than enthusiastic when the three former X-Men moved into the lighthouse, as Meggan had offered it as team headquarters. He proved inflexible and easy to anger when, for example, the others confronted him about the amounts of alcohol he consumed. Despite his 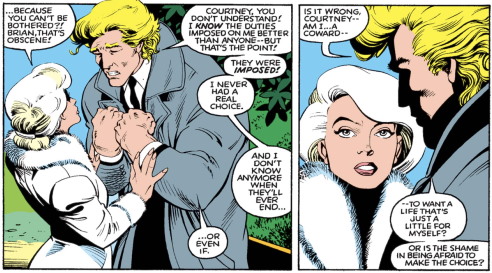 reservations, Brian Braddock acted as the new team’s financial backer. When wanting to open bank accounts for his teammates, he met his old flame, Courtney Ross who had become vice president of Fraser’s Bank since they last saw each other. He marveled at her now platinum-blonde hair and learned that this was her natural hair color; in the past she had been dying it auburn. Brian was troubled more than ever, as he felt that his duties as Captain Britain had been imposed upon him rather than a choice. However, after talking it through with Courtney, with whom he grew closer again, he decided to give Excalibur another try. [Excalibur (1st series) #1-3]

Wanting revenge on Captain Britain for their prior tussle years ago, Arcade kidnapped Courtney again, luring Excalibur into Murderworld, where their minds were exchanged with those of the 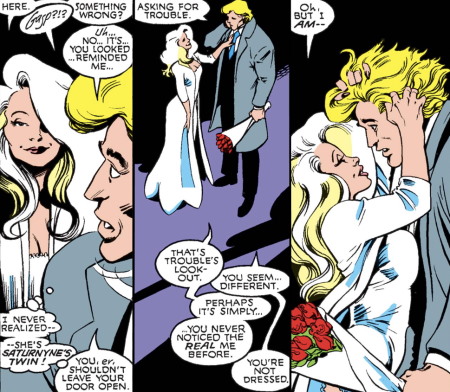 Crazy Gang. Thanks to Shadowcat, Excalibur managed to escape and, several days later, Brian had a date with Courtney. He felt torn between his current lover and his ex, as Courtney, unlike Meggan, was her own woman and didn’t need him that desperately. At her apartment, Brian was met by a very seductive Courtney, who passionately kissed him, just as he realized for the first time how much like Saturnyne Courtney looked. In fact, they were counterparts of each other. Brian was unaware of the fact that, moments before he arrived, the evil Mastrex Sat-yr-9 from Earth-839 had killed the real Courtney and taken her place. It is unclear quite how far “Courtney’s” and Brian’s relationship went but they met several times after that date. [Excalibur (1st series) #4-5, 20] 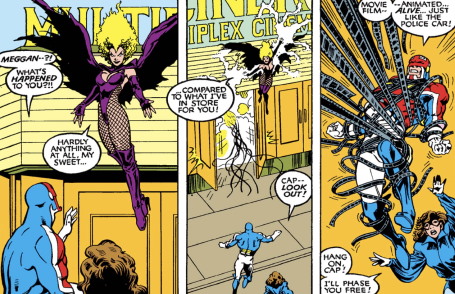 As soon as she recognized the other woman re-entering Brian’s life, Meggan tried to act more seductively to “win him back.” When the team flew to New York to help during Inferno, Meggan was overcome by the demonic energies and transformed into the Goblin Princess. As such she lived out her jealousy by making Brian her pet. Again, it was Shadowcat who saved them, as she disrupted the magical energies with the Soulsword. However, in the process, the helmet of Captain Britain’s amplifying uniform was destroyed. [Excalibur (1st series) #6-7]

Following the incident, Excalibur stayed in New York for a couple of days, during which Brian experienced several inexplicable power shortages. The team headed to the remains of Xavier’s 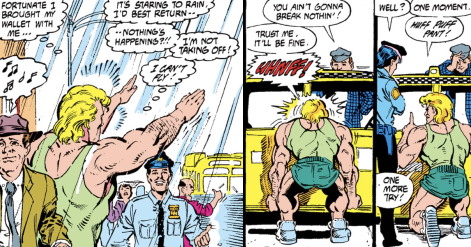 mansion, where Brian underwent a few tests. However, before they could come up with an answer, they were called back home. Strangely, the moment they returned to Great Britain, Brian quickly recovered. Excalibur had to confront a Nazi version of their team, including their leader Hauptmann Englande, an arrogant Braddock analogue. Captain Britain’s powers returned just in time to beat him. [Excalibur (1st series) #8-10]

As they were trying to deal with the aftermath of the Nazi situation, Excalibur were sent on a journey through dimensions, the so-called Cross-Time-Caper, thanks to the powers of the strange creature, Widget. In the first dimension they came to, a reality full of medieval magic, Brian was given another uniform to replaced his destroyed one, which formerly belonged to the realm’s hero, Captain Marshall. The people there also explained to him why he had lost his abilities recently. Brian learned that, while he could rely on his own powers within Great Britain, outside he’d need an amplifier suit like this one or the powers would fade. [Excalibur (1st series) #13] 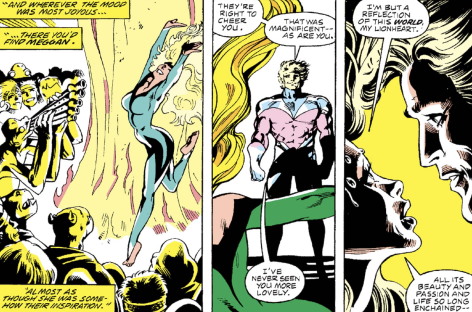 During their adventures all over the omniverse, Brian noticed the growing closeness between Meggan and Nightcrawler with some jealousy. Also witnessing Meggan in her true element and seeing the loss of several Captain Britain and Meggan analogues, his relationship with Meggan grew stronger again, especially as “Courtney” was not present to interfere. [Excalibur (1st series) #15-17]

Cap met and fought several analogues of himself, but not only of himself or his teammates. In one strange world that seemed to only be interested in the grand prix, Excalibur confronted a super-powered version of Brian’s elder brother, Jamie, who took the opportunity to give Captain Britain a royal thrashing. Excalibur were unaware of the fact that this world had been created by the real Jamie (who, in the meantime, had been freed from Doc Croc by the Technet on behalf of Sat-yr-9/”Courtney”) and who had developed reality-warping powers, along with complete insanity. [Excalibur (1st series) #18-19]

Eventually, Excalibur found their way back to their own reality and settled back in. Brian also made an effort to not drink anymore, disliking the lack of control and the effect alcohol had on him. [Excalibur (1st series) #28] Several weeks after their return, the team also learned that the X-Men had not been killed in Dallas, but instead had gone undercover. Once they revealed themselves again, Betsy was hesitant to visit her brother, as in the meantime she had been magically transformed. She was unsure how Brian would react to his twin sister now sporting an Asian body.

Around the same time, Commander Thomas was asked by W.H.O. (the organization that succeeded the RCX) to investigate the mysterious deaths of all customers in a fast-food chain restaurant. Finding similar gruesome deaths around the world, Dai and journalist Kate McClellan learned that the embodiment of nature, the Green Knight, was striking back against a rapacious humanity, specifically the sinister Omni corporation.

At some point, Dai was even possessed by a Pendragon, the spirit of the Arthurian knight Gawain, and W.H.O. asked Captain Britain to find and return Dai to them. Dai, displaying superhuman strength, refused to come back and the two men got into a fight, both driven by the Pendragons within them, as Captain Britain, now also possessed by a Pendragon, seemed to carry at least a part of the spirit of Lancelot. Cap seemingly slew Dai in a berserker rage (as Lancelot had 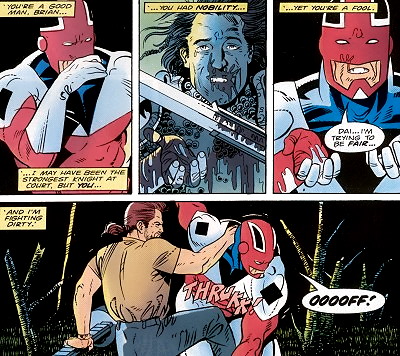 tragically slain Gawain when they ended up on different sides). However, while Brian grieved, Dai soon returned, now having completely taken on the aspect of Gawain. Cap, Gawain/Dai and Kate McClellan made their way to the Green Chapel and confronted the Green Knight, who demanded a sacrifice if he was to spare humanity, to forge a bond of trust as had happened before between him and Gawain (as alluded in the medieval poem “Sir Gawain and the Green Knight”). Captain Britain offered himself but was refused, as a sacrifice coming from a hero would mean nothing. Dai/Gawain decided to sacrifice himself and his sacrifice was accepted - in essence, Dai lost the Gawain Pendragon and turned normal again. [Knights of Pendragon (1st series) #1-6]

While no longer involved in the affairs of the Pendragons, especially as the Lancelot Pendragon left him to manifest in Union Jack, Cap (and Dai) kept an eye on Kate and her friends, tried to help and were later embroiled in the Pendragons’ final battle against the evil of the Bane and their human agents in the Omni corporation. [Knights of Pendragon (1st series) #7-18] 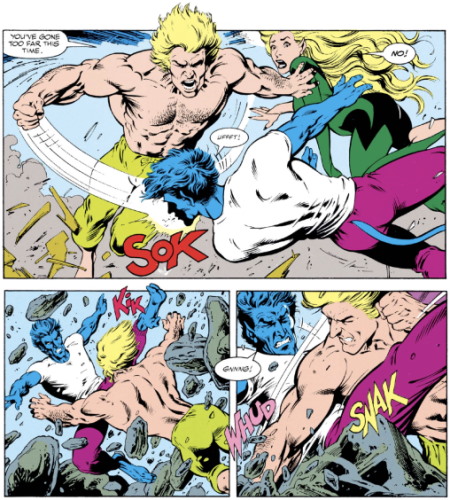 Back with Excalibur, things became a bit more untenable. Excalibur was more or less forced to “adopt” the leaderless Technet and, as seen a couple of times before, Brian hates having houseguests. In addition, his jealousy over Nightcrawler’s friendship with Meggan had come to a boiling point (not to mention the fact that he resented the girls automatically looking to Nightcrawler for leadership). Misinterpreting a harmless situation between Kurt and Meggan, he attacked Nightcrawler, breaking the other man’s leg. Brian apologized immediately afterwards, realizing his foolishness.

However, it was too late, as Brian was taken into custody by the Captain Britain Corps. The Corps had had enough of Brian’s constant flagellation of its rules (which Brian wasn’t even aware of, being disinterested in Corps matters), the Nightcrawler incident being only the latest violation in a long row. It also didn’t 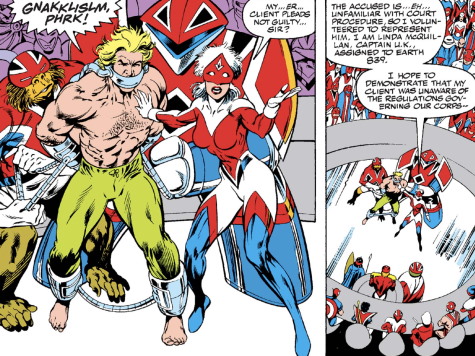 help that, in his various trips to other realities, he hadn’t exactly made friends among other Captains, apart from his defense attorney, Captain UK. Brian refused to accept the Court’s authority, which was about to result in a death penalty. Fortunately, Saturnyne, sent by Roma, intervened on his behalf before snubbing him. [Excalibur (1st series) #43-44]

Along the line, Brian learned more about what being a Captain meant from Captain UK. Each member of the Captain Britain Corps had the job to guard his world's dimensional interface (which happened to be located around Excalibur’s lighthouse) and be a champion of his or her society’s moral code, which explained why “villains” like Hauptmann Englande or Kaptain Briton were or had been Corps members. Brian learned that all Captains metabolized the energy matrix in Otherworld, generated by the dimensional interface. He also discovered that there seemed to be an equivalent of his lighthouse, one on every plane in the multiverse, the original having been built by Merlyn himself.

While Brian was still exploring Otherworld, an old pensioned member of the Captain Britain Corps (actually Merlyn in disguise) told him that Roma had engineered Excalibur’s creation and had manipulated the team from the very start. To accomplish this, she put a “blunder factor “ on Brian to hamper his abilities when he tried to act alone, and force him to work closer with his team. Fed up, Brian fought his way into Roma’s presence. She admitted 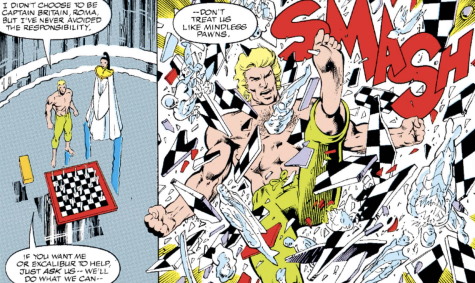 that she had put a jinx on him, as he was the strongest of the Captain Britain Corps and a loner by nature. If she hadn’t restrained him, it would have split the team apart. She also admitted that the plan to have Excalibur exist was an old game by her father. She didn’t know the reason. Brian asked her to remove the jinx and told her that if she wanted Excalibur’s help she should ask them, but not treat them like pawns like Merlyn did. Roma’s deputy, Saturnyne was impressed by his display of strength and independence given their past. But now, it was Brian who wasn’t interested in her and gave her the cold shoulder. [Excalibur (1st series) #45-47]

Captain Britain returned home to the others, just in time for the team’s encounter with an old nemesis of Merlyn’s, Necrom, the opponent Excalibur was founded to face. Back at the lighthouse, Captain Britain found that he was suddenly growing taller and stronger, while dimensions around the lighthouse were starting to break down. Necrom was beginning to compress the alternate Earths into a single singularity. Cap’s growth spurt was actually caused by a stronger concentration of matrix energy, as dimensions were being condensed. Using their powers in perfect concert, Excalibur managed to stop the convergence, as planned by Merlyn, who had only faked his death so many months ago. Later, after Merlyn showed himself and revealed how he had used them, Brian and Meggan used their powers to destroy the lighthouse, thus dispersing Merlyn’s prized energy matrix (on Roma’s telepathic suggestion). Believing themselves to be free agents now, Excalibur moved into Braddock Manor. [Excalibur (1st series) #49-50]