Fate had another job in mind for Carol Danvers. Shortly after losing her position at WOMAN magazine, Ms. Marvel was offered a chance at becoming a full-fledged Avenger. When the Scarlet Witch decided to take a leave of absence for personal reasons, Ms. Marvel was selected as her replacement by the team’s government liaison, Henry Gyrich.

Carol almost did not make it onto the team because she refused to have her fingerprints taken and a positive identity scan was a standard requirement for joining under the government's newly established regulations for the super-team. Ms. Marvel feared that this would compromise her secret identity, especially if her fingerprints were ever cross-referenced with her existing NASA or military files. Luckily, Iron Man came up with an acceptable solution to the problem when he suggested the government use her retina prints instead, thus eliminating the possibility of compromising Ms. Marvel's secret identity. [Avengers (1st series) #183]

Ms. Marvel fit right in with Earth’s Mightiest Heroes and proved herself a worthy addition against such foes as the Absorbing Man, Chthon, the Grey Gargoyle, the Elements of Doom and the Taskmaster. She even defeated Sabretooth after he escaped from S.H.I.E.L.D. custody. But Carol had little time to enjoy her success as an Avenger or her developing friendships with her new teammates before tragedy struck. Her friend and psychiatrist, Michael Barnett, was brutally murdered in his office. As Ms. Marvel, Carol enlisted Iron Man’s help in investigating the crime. Using a heat-based device that could visually recreate recent events in a given space, Ms. Marvel learned that Michael had been killed by a mysterious shape-shifter while posing as Carol Danvers! The metamorph then rifled through Dr. Barnett’s office and stole his files on Carol Danvers. Enraged by Michael’s death and realizing that his murderer was really after her for some reason, 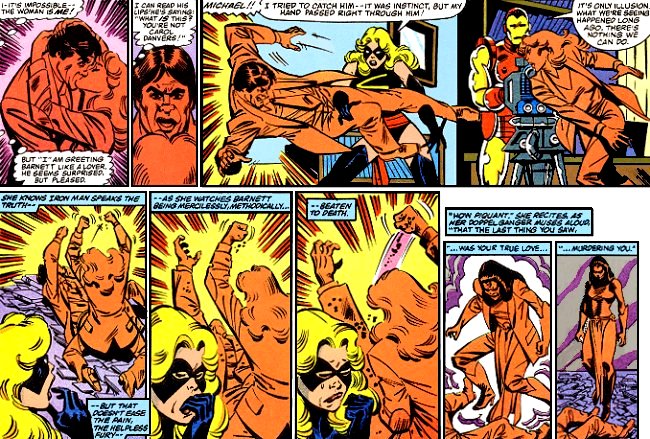 Carol vowed to find his killer and exact revenge. Carol’s only clue to the killer’s whereabouts was a phone call she had made from Michael’s office to an arms dealer named Peter Coelho. Tracking the call as Ms. Marvel, she found herself stumbling upon a business meeting between Coelho and members of the Hellfire Club’s Inner Circle. Ms. Marvel was discovered and barely survived her battle with Donald Pierce and Harry Leland. Despite this defeat, Carol had learned enough about Coelho’s plans to track him to Hong Kong. Carol’s arrival there did not go unnoticed. Destiny, a member of the Brotherhood of Evil Mutants with precognitive abilities, sensed Carol’s arrival and alerted her partner, Mystique. Months earlier, Destiny had sensed that Carol Danvers posed a potential threat to Rogue, a young mutant that she and Mystique had taken in as a daughter and inducted as a member of the Brotherhood. Hearing this, Mystique vowed to destroy Carol Danvers before she could do any harm to Rogue and had been stalking Carol ever since. Through Michael Barnett’s files, Mystique had discovered that Carol Danvers was Ms. Marvel.

Mystique ordered her teammates Pyro and Avalanche to ambush Carol. Battling them as Ms. Marvel, Carol had a seventh sense flash when she heard the name Mystique. This enabled her to 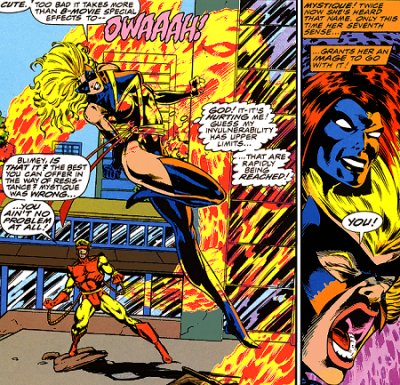 make the connection between the Brotherhood’s leader and Michael’s murder. She finally had a name to go with the image of the woman who had killed Michael. Fueled by her rage and grief, Ms. Marvel defeated Pyro and Avalanche but was unable to track down Mystique. When she tried to pick up the trail through Coelho, she found him murdered as well. Unbeknownst to Carol, Coelho had planned to double-cross the Hellfire Club by selling the arms intended for them to the Brotherhood. The Hellfire Club had sent Tessa to track Carol’s movement following her earlier battle against Pierce and Leland. This led them to the discovery of Coelho’s plans. Mystique blamed Ms. Marvel for the loss of arms, as well as Coelho’s death and the capture of Pyro and Avalanche. This intensified her hatred of Carol and her determination to see her dead. [Marvel Super-Heroes (2nd series) #10-11]

Carol’s quest for revenge would soon be set aside to deal with an even more pressing turn of events. While visiting the Scarlet Witch during her leave of absence, Ms. Marvel suddenly 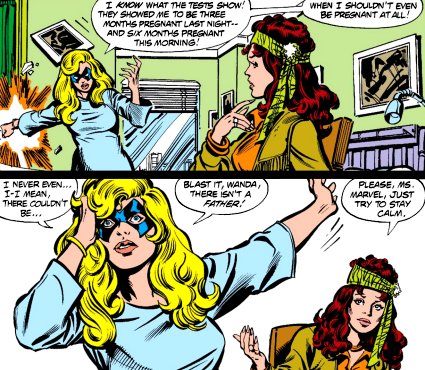 collapsed. Fearing for her friend’s health, Wanda rushed Ms. Marvel to a nearby hospital, where a doctor made a surprising diagnosis: Ms. Marvel was three months pregnant! Carol was shocked when she learned that she was pregnant and devastated since she was completely unaware of the identity of the father or how she could possibly be pregnant since she had not been intimate with anyone in a long time. Carol chose to reveal her secret identity to the Scarlet Witch, who was doing her best to support her new teammate with this bizarre news. The two returned to Avengers Mansion, where they consulted with Dr. Donald Blake regarding Carol’s condition. [Avengers (1st series) #197-198] 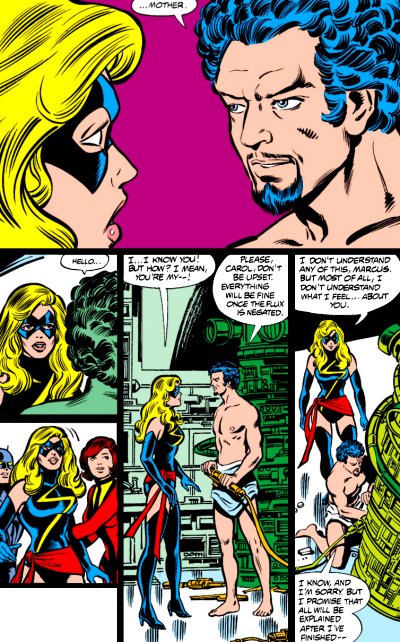 The Avengers tried to be supportive of Carol’s unexpected condition but their hearty congratulations and excitement at the news did not go over well with Carol. She felt confused, violated and shaken to the core of her being... both as a woman and a hero. The pregnancy ran its course in a matter of days. The birth itself was painless and far from a traditional birthing experience. Within a day, the baby boy she gave birth to grew into a full-grown man. Calling himself Marcus, the strange man-child demanded tools and materials and began constructing a device. He insisted on these conditions before he would reveal anything about his origins to the Avengers or to his “mother.” Upon meeting Marcus, Carol felt strangely connected to him and filled with feelings of love and trust she could not explain. With Marcus’ “birth” came incredible temporal shifts in the vicinity of Avengers Mansion. The streets were soon filled with horse-drawn buggies, dinosaurs, mounted knights in shining armor and futuristic spacecraft, all of which were wreaking havoc in the area. Marcus’ device was designed to negate these effects and stabilize his place in this reality. However, sensing that Marcus was behind these strange attacks, Hawkeye destroyed his machine before it could be activated. Distraught at seeing his work obliterated, Marcus tried to instigate a fight with the Avengers, in the hope that they would kill him. Carol stepped in between them and Marcus broke down and finally revealed his origins.

He told the story of how his father, the time-lord Immortus had rescued a human woman from drowning and brought her to Limbo for companionship. Using devices to subtly manipulate her, the woman eventually fell in love with Immortus and bore him a son, Marcus. He was raised by his father in Limbo after his mother was forcefully drawn back to her rightful place in the timestream. He was content there until his father also disappeared. He grew lonely and found he could not journey to Earth without severely disrupting the local timestream. Inspired by his father’s recounting of his seduction of his mother, Marcus hatched a plan to be born into Earth’s timeline through a surrogate “mother.” He selected Ms. Marvel for her inherent strength and teleported her to Limbo. He set about trying to win her love by courting her romantically. Carol resisted, however, and after weeks of trying to win her love he did so… with a subtle boost from Immortus’ mind-controlling device. His seduction complete, he impregnated her with his own essence. Having done this, his corporeal form faded and preset devices wiped Carol’s memory of these events then returned her to the exact moment from which he had abducted her. Her uncanny pregnancy and birth were the final fruition of his plans.

With his temporal stabilizer destroyed, Marcus’ only option was to return to Limbo or die on Earth, since his mere presence would cause irreparable damage to reality if he remained. Still feeling the lingering effects of Immortus’ mind-bending devices and confused by her “motherly” affections for Marcus, Carol volunteered to accompany him back to Limbo. The Avengers wished the pair well and Thor used his hammer to create a temporal vortex that returned them both to Limbo. [Avengers (1st series) #200]

In Limbo, Marcus continued to age rapidly and quickly died of old age before he realized that his temporal pattern was now out-of-sync with that of Limbo. Carol found herself alone in Limbo and finally free of Marcus’ mind control. She was sickened by Marcus' manipulations and felt betrayed by the Avengers, who failed to question Marcus' actions or motives. Eventually, Carol mastered Immortus' technology and returned to Earth, choosing to settle in San Francisco instead of returning to the Avengers. After the trauma of Michael Barnett’s death, her abduction and rape by Marcus Immortus and the bizarre pregnancy that followed, Carol simply wanted to start anew. [Avengers Annual #10]

Carol's return to Earth was sensed by Destiny, Mystique's partner. She had previously foreseen that Carol Danvers would be involved in an event that would destroy the life of Mystique's foster 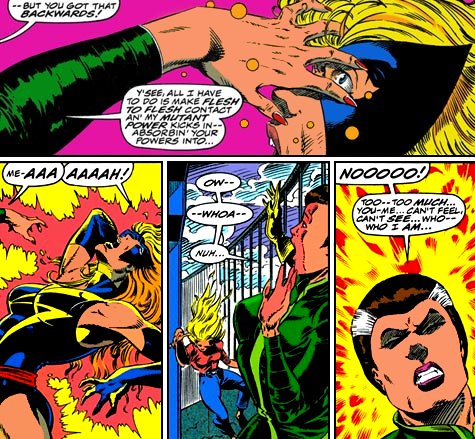 daughter, Rogue, and Mystique had vowed to destroy Carol before this could happen and developed an obsessive hatred for Ms. Marvel. Rogue, overhearing Destiny's concerns and Mystique's ranting, decided to take the battle to Carol herself to prove she was capable of fighting her own battles. She ambushed Carol at her apartment in San Francisco, but Carol fought back, resulting in a battle atop the Golden Gate Bridge. When Rogue tried to use her power-absorbing abilities on Ms. Marvel, something went terribly wrong and she absorbed too much of Carol's persona. The transfer of powers and psyche was permanent -- Carol lost the abilities given to her by the Psyche-Magnitron, as well as the memories of her entire life. Driven nearly mad by Carol's thoughts and memories, Rogue threw Carol's body from the bridge, hoping that the woman’s physical death would also end the second voice in her head. [Marvel Super-Heroes (2nd series) #11]

[Note: Check Rogue’s spotlight entry for more information on the after-effects of this encounter on Rogue or the Identity Duel page to learn what became of the absorbed Carol persona in Rogue’s head.]

Amazingly, Carol was rescued by the original Spider-Woman, aka Jessica Drew, who just happened to be patrolling. She rushed Carol to the hospital, where she was identified and diagnosed as a tabula rasa, a mental blank slate. Jessica called in Professor Xavier of the X-Men, 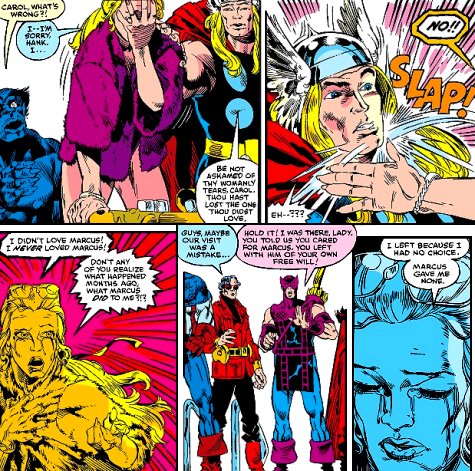 who was able to pull forth a visual image of Carol’s attacker from her subconscious.  Using her new powers of strength and invulnerability, Rogue helped Mystique in breaking several other members of the Brotherhood of Evil Mutants out of prison, but Spider-Woman and the Avengers stopped them in time. After this incident, Carol and Jessica stayed at Xavier’s mansion in Westchester, during which the telepath managed to recreate most of Carol’s memories by pulling them out of her subconscious. However, he was unable to restore her emotional connection to those memories and experiences. After a few weeks of therapy, and support by Jessica and the X-Men, the now powerless Carol confronted the Avengers and vented her anger for their betrayal of her. She told them how Marcus had used Immortus’ devices to control her mind, forcing her to succumb to him sexually. He had even discussed these devices in front of the team, and yet they never questioned Carol's sudden and deep affection for Marcus. The Avengers realized that Carol was dead on with her accusation that they had not questioned Marcus’ intentions enough and trusted him implicitly. Ashamed, they apologized to Carol and left awkwardly, knowing they had failed one of their own. [Avengers Annual #10]