For the next several months, Carol remained with the X-Men as Xavier worked to rebuild her lost memories completely. She lived with them first at the X-Mansion and later at Magneto’s Bermuda 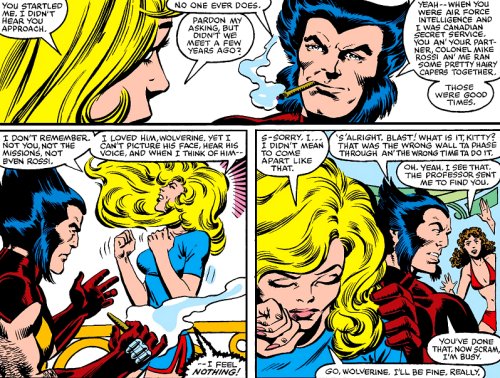 Island base.  During this time, she got to know the X-Men and helped where she could despite her lack of powers. Carol found herself increasingly distraught over her new reality. With each memory Xavier restored, she came to realize just how much Rogue had taken from her. She could recall past events and important people in her life but felt none of the emotions that should accompany those remembrances. While Carol was powerless, she was far from being plain old Carol Danvers. Testing and training with the X-Men revealed that she still possessed a unique genetic structure that gave her strength, resilience and agility beyond peak human potential, the equivalent of a Kree woman. She also still had her training and skills from her time in the intelligence field. [Uncanny X-Men (1st series) #150, 153-154]

She put these skills and her military rank to good use alongside the X-Men when she helped them infiltrate the Pentagon in order to erase the government’s files on the X-Men. While there, she inadvertently ran into Rogue who had accompanied Mystique there in her guise as Department of Defense administrator, Raven Darkholme. Carol and Rogue immediately recognized each other and the villainess threw Carol aside. This blew the X-Men’s cover and Wolverine and Storm engaged Rogue in battle. Carol’s desire for revenge was difficult to set aside, but she did so in order to complete their mission. As she slipped away during the ensuing chaos caused by the X-Men’s conflict with Rogue, she was spotted by Mystique. As Carol was entering the virus into the Pentagon’s computer systems, Mystique arrived, disguised as Nick Fury, and shot Carol. She fell, but was not unconscious.

Taking Mystique by surprise, she struck back. As Mystique shifted into Storm’s form, Carol realized that she was at last face-to-face with the woman who had killed Michael Barnett and precipitated that fateful battle against Rogue. Carol defeated Mystique in single combat and turned her over to the authorities, choosing not to kill her, despite the clear opportunity to do so. As she erased the files on the X-Men, she also purged the government’s files on Carol Danvers and Ms. Marvel. With a clean slate and a small taste of revenge, Carol was finally ready to start her life anew. [Uncanny X-Men (1st series) #158] 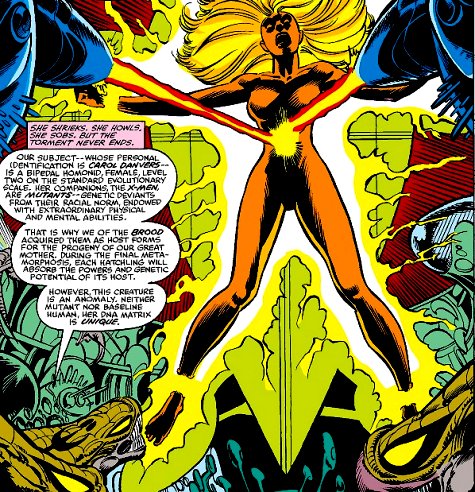 Carol had proven her worth to the X-Men and soon accompanied them into space for a farewell banquet for the Shi’ar Majestrix, Lilandra, who had also been a guest of the X-Men during this time. Once aboard Lilandra’s ship, the X-Men were ambushed by the Brood and taken captive by the vile aliens. The Brood took a special interest in Carol’s unique genetic structure and subjected her to a series of experiments. During these procedures, they accelerated her genetic development and manipulated her form to induce Brood-like physical characteristics. She was rescued by Wolverine and joined him in freeing the rest of the X-Men, who had already been implanted with Brood eggs. [Uncanny X-Men (1st series) #161-163]

Within hours, Carol underwent an amazing transformation. She assumed a cosmically-empowered energy form that allowed her to tap into the primal forces of a white hole. Now 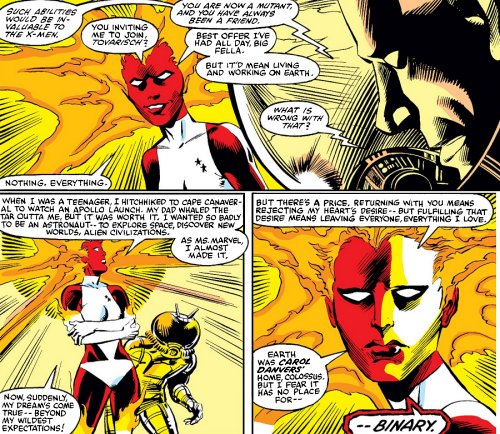 possessing power far beyond what she had as Ms. Marvel, Carol helped the X-Men escape the Brood by single-handedly recharging the power cells of Lilandra’s vessel. Dubbing herself Binary, Carol pondered an offer to join the X-Men but was torn. Earth was a place filled with empty memories and, in this new form, she was one with the cosmos and finally able to explore space as she had always dreamed of doing. When she learned that the X-Men had all been implanted with Brood eggs and would soon transform into Brood themselves, Carol flew into a rage. Flying through space to the Brood’s outpost on Madrizar, Binary unleashed a massive aerial attack. In moments, she destroyed the entire Brood colony and all who lived there. [Uncanny X-Men (1st series) #164] 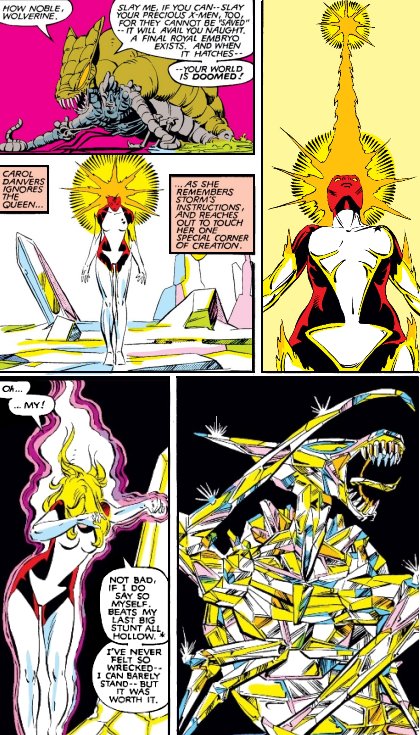 Allying themselves with the race of whale-like space creatures called the Acanti, the X-Men chose to use their final hours to free the Acanti from their long years of enslavement by the Brood. Targeting Broodworld, Binary lead a space-born assault that allowed the X-Men planet-side to free the soul of a long dead Acanti and liberate the entire race.

Tapping into her new cosmic powers and working with the Acanti, Binary managed to purge the Brood essence from the X-Men and destroy the Brood queen by “purifying” her completely, transforming her into inert crystal. In doing so, Carol made a lifelong enemy of the deadly Brood and cemented her place among the X-Men. [Uncanny X-Men (1st series) #166]

After the X-Men returned to Earth, Carol took some time off to visit her parents. This visit reinforced the sense of disconnection that Carol felt toward all those that had once been important in her life. When she returned to Xavier’s mansion, she was shocked to find Rogue there seeking help from the X-Men. Carol’s reaction was direct and forceful: she punched Rogue through the roof of the mansion and into orbit! When Rogue returned, Carol confronted her as Binary. Bewildered, Rogue had no idea who this mystery woman was or why she had attacked her, until Binary powered down.

Carol was informed that Rogue had come to Professor Xavier for help and was remorseful about her past transgressions. Professor X had made Rogue a probationary member of the team, despite the protests of Storm and the other X-Men, who were deeply divided by the Professor’s decision to admit Rogue to the school and threatene 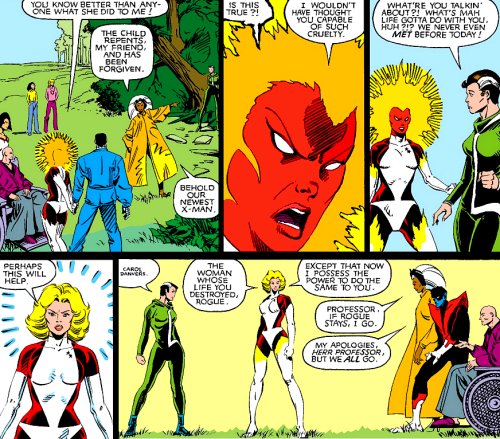 d to leave. The Professor explained that, like Wolverine before her, Rogue deserved the chance to start over and atone for her past. Carol understood Xavier’s point but could not extend her forgiveness to the woman who had destroyed everything she once was. She angrily left, rejecting the tentative offer of membership extended to her. [Uncanny X-Men (1st series) #171]

With nowhere else to go, Binary returned to the Starjammers, whom she had befriended during her adventures with the X-Men. Knowing that she no longer had a place on Earth, she accepted Corsair’s offer to join the ragtag group of space pirates. [Uncanny X-Men (1st series) #174] Prior to leaving Earth, Carol and Wolverine crashed one of the Avengers’ occasional poker nights.  There, Carol 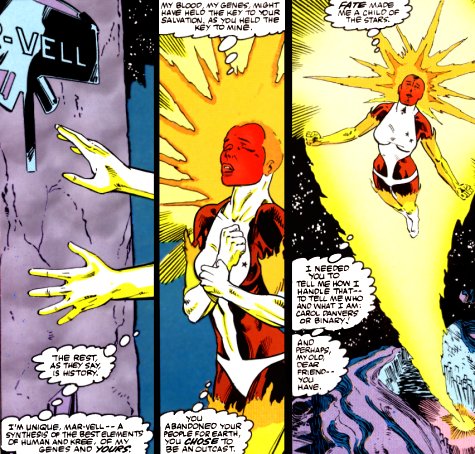 was introduced to the Avengers’ newest member: Monica Rambeau, aka Captain Marvel. Surprised to hear that someone else was using Mar-vell’s heroic identity, Carol made a snide joke about Monica being an as yet unseen side of Mar-Vell’s personality. Appalled at the tastelessness of the joke, the others informed Carol of Mar-Vell’s passing after a long struggle with cancer. Assuming her Binary form, Carol launched herself into space. Learning the location of Mar-Vell’s grave from Mentor of Titan, Carol went to pay her respects to the man who had once meant so much to her. Despite the flood of memories of her friendship with and feelings for Mar-Vell, Carol could not fully feel grief over Mar-Vell’s death. She had hoped that Mar-Vell could help her to understand her recent transformation into Binary and her new cosmic existence. In an indirect way, he did. Her lack of feelings at Mar-Vell’s grave reinforced what Carol already knew. Her life on Earth as Carol Danvers was essentially over and it was time for her to embrace her place among the stars as Binary. [Marvel Fanfare (1st series) #24]

As Binary, Carol was a valued member of the Starjammers and fought alongside them against such threats as the Technarch Magus and Deathbird’s Imperial Guard. In a strange twist of 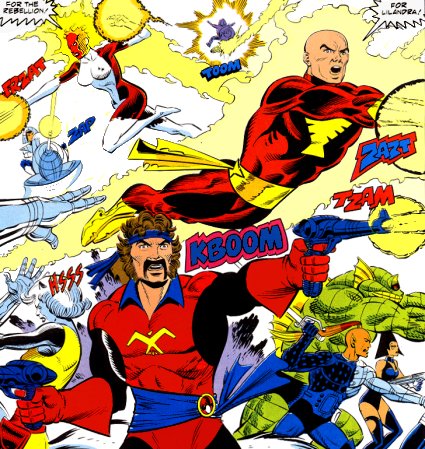 fate, Professor Xavier ended up stranded in space with the Starjammers several weeks later, and also joined the group. Alongside the Starjammers, Binary and Xavier worked to help restore Lilandra to the Shi'ar throne. In space, Carol was able to escape her loss and rebuild her life. The stars were her destination and offered her a whole universe in which to escape the emptiness her former life represented. Carol remained with the Starjammers for many months. During this time, she lived out her lifelong dream of exploring the stars and formed a close friendship with Raza Longknife, the sullen cyborg member of the Starjammers. However, despite fighting the Shi'ar forces and her former enemy Deathbird, Carol found herself frustrated at the lack of challenge among the Starjammers' adversaries. [X-Men: Spotlight on the Starjammers #1-2]