Warbird had hit her stride as an Avenger and was enjoying a lengthy stint with the team when the Kang War erupted. Leading the assault by Kang’s forces was his son, the Scarlet Centurion. 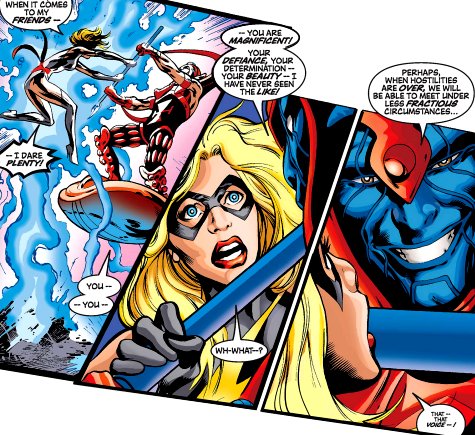 From the moment Warbird faced him in combat, she recognized his voice and manner. He was Marcus Immortus or some time-warped version of him.  Shaken by this revelation, Warbird threw herself into the fight. Kang had planned his war well, as he had selected a specific timeframe during which he knew that Earth’s heroes would be divided, having to deal with several major threats emerging at once. He built a coalition of allies that included rebel Atlanteans, the Deviants and super-villains in search of greater power under his planned regime on Earth. Dividing the team, Warbird was placed in charge of the assault on the Deviants. Through quick thinking and calculated risks, Warbird challenged the leader of the Deviants to single-combat. She managed to defeat his chosen champion and win control of the Deviant army, striking a significant blow against Kang’s forces. [Avengers (3rd series) #41-44]

Warbird’s next assignment involved leading a team of Avengers to infiltrate the lair of the villain known as the Master, who had risen up against Kang. The Master’s technology proved effective in penetrating Kang’s defenses and the Avengers desperately needed this advantage against their 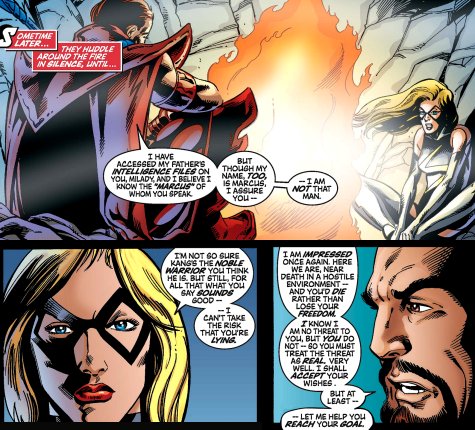 perennial foe. As the Kang War progressed, the Scarlet Centurion began watching Carol closely. He was fascinated by her strength, power and beauty. His father Kang noticed his attraction and warned him against being distracted by women while at war. When a trap set by the Master left Warbird drained and stranded in the icy tundra surrounding  his arctic lair, the Scarlet Centurion came to her aid. Believing that Marcus was there to take advantage of her weakened condition, Warbird attacked him and destroyed his communicator and his means of transporting himself to his ship. The Centurion was shocked by the hostility Warbird demonstrated towards him. He admitted his attraction to her and that he could not bear to let her die. The two made a temporary truce, though given his resemblance to Marcus Immortus, Carol did not trust him. After she revealed her reasons why she was wary of him, the Centurion explained that he was not Marcus Immortus, despite their similarities. He was the son of Kang, Immortus’ temporal counterpart and had not been raised in Limbo but trained in combat by his father. The Centurion offered to help Warbird with her current goals and, together, Warbird and Marcus invaded the Master’s stronghold. Despite her mistrust, Carol could not help but be impressed by Marcus’ bravery in battle or efforts to win her trust. She also could not help but question whether her begrudging respect was not the result of some hidden mind-control device. Despite her misgivings, she saved Marcus’ life in battle. When the two parted, Marcus acknowledged Warbird’s reasons for not trusting him and vowed to find a way to prove himself to her. He offered to help her in any way that he could, short of betraying his father. [Avengers (3rd series) #47] 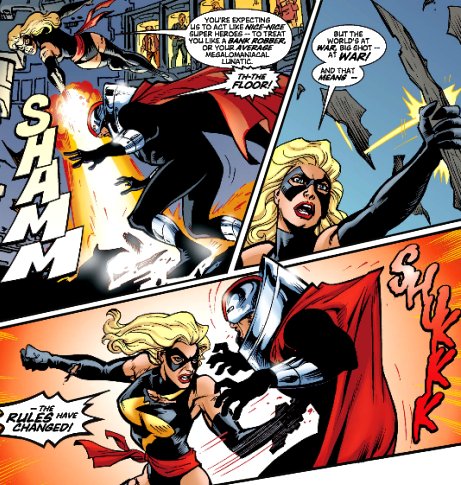 The Scarlet Centurion’s affection for Warbird proved to be the key to Kang’s defeat. Kang had conquered Earth and through military genius and show of force had forced the Avengers to sign a statement of surrender. However, a handful of Avengers remained free, including Warbird’s team. They were able to breach the Master’s stronghold, in part because Marcus was covertly jamming the Master's sensors, fulfilling his vow to Carol. Naturally, the Master refused to surrender his technology and, in the course of a battle to wrest control, Warbird killed him. [Avengers (3rd series) #48]

This same technology proved to be the pivotal asset needed to defeat Kang’s defenses and take the battle to him aboard his massive command ship, Damocles Base. Warbird was among the 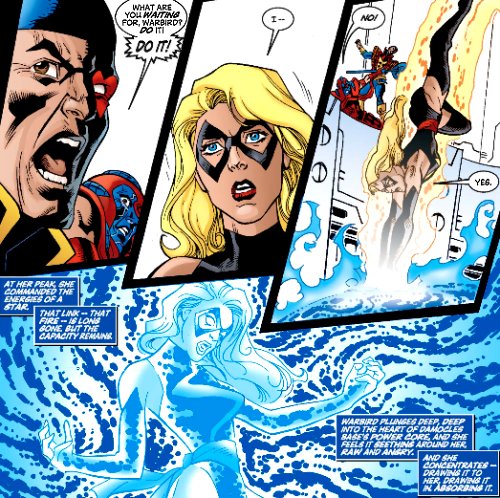 raiding party and made her way to the ship’s power core to disable it. Once there, she was confronted by the Scarlet Centurion. The two had no wish to battle each other and Carol’s mixed feelings for the Centurion caused her to hesitate for a moment. However, with the fate of Earth at stake, Carol’s choice was clear. She plunged herself into the core and, after absorbing massive amounts of energy, she used it to destroy Kang’s ship. Kang was defeated and Earth freed of his control. In the final analysis, it was Marcus’ affection for Warbird that proved to be Kang’s undoing. Marcus orchestrated Kang’s escape and when Kang realized his son’s betrayal, he killed him rather than allow a traitor to remain in his midst. [Avengers (3rd series) #53-54]

Despite her instrumental role in the Avengers’ victory, Carol's execution of the Master haunted her. She could not help but feel she had failed the standards set by the Avengers when she violated their oath not to kill. She demanded a formal inquiry into her conduct, fully expecting to be expelled from the team once again. The team found that she had acted in a time of war under extraordinary circumstances and cleared her of any wrong-doing. In many ways, this second hearing helped both Carol and the team finally move on from her previous courtmartial, as she had truly redeemed herself in their eyes and in her own. [Avengers (3rd series) #55]

Warbird continued to serve with the Avengers until an even bigger opportunity presented itself. When the Avengers responded to a major biological threat unleashed on the Midwest by the Red

Skull, Warbird once again demonstrated her calm under pressure, her leadership skills and ability to inspire those around her. When the dust had cleared and the crisis averted, the president offered Carol the chance to help the nation on a permanent basis as his Chief Field Leader for Homeland Security. Despite her loyalty to the Avengers, Warbird accepted this new challenge and role with great enthusiasm and Captain America’s blessing. [Avengers (3rd series) #70]

Warbird was among the Avengers who assembled when the team was hit by a series of seemingly random attacks. These unexplained assaults left Ant-Man dead and the Vision in 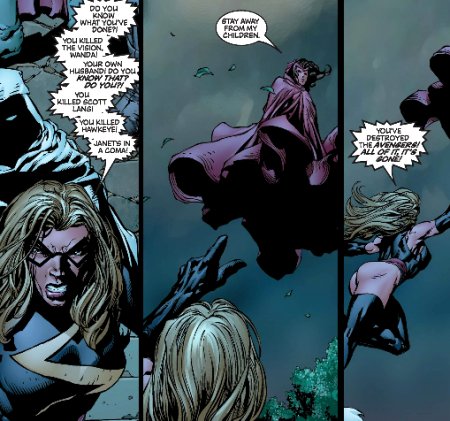 pieces. When a Kree battle cruiser attacked the Mansion out of nowhere, the Avengers tried to repel it and Hawkeye died in battle. Bewildered by these ambushes, the entire team was dismayed to learn that the Scarlet Witch was the source of these attacks and resulting casualties. Doctor Strange explained that Wanda’s powers had caused a gradual mental breakdown in the mutant sorceress and that she was unwittingly lashing out at her nearest and dearest. Warbird was among the first to leap to Wanda’s defense. However, the Avengers were soon faced with irrefutable proof that Wanda was insane and behind these tragedies. Doctor Strange subdued Wanda, who was then spirited away by her father, Magneto. The Avengers were left to pick up the pieces left in the wake of her madness. [Avengers (1st series) #501-503]

As an officer for Homeland Security, Carol wrote a charter that gave her division authority to protect the nation and its people from superhuman hostilities. As such, she was assigned to serve 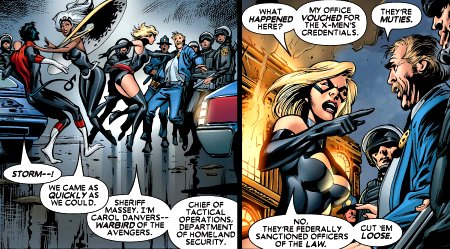 as a member of the Commission on Superhuman Activities and given the title Superhuman Liaison.  She helped to organize efforts to coordinate response to superhuman threats. As superhuman liaison, she helped the X-Men unit operating as the X-Treme Sanctions Executive (XSE) to establish their credentials with other law enforcement agencies. She was also assigned to serve as the parole officer to Abner Jenkins, the Thunderbolt known as MACH IV. While working with Jenkins, she oversaw his formation of the new Thunderbolts and advised him as needed. She assisted them in battle as Warbird against the Atlantean renegades called the Fathom Five and the forces of Hydra. [Uncanny X-Men (1st series) #445, New Thunderbolts #4-6]

Months after the events that destroyed the Avengers, Carol was among the members who gathered to lay ghosts to rest and determine the future of the team. Surprisingly, of all those 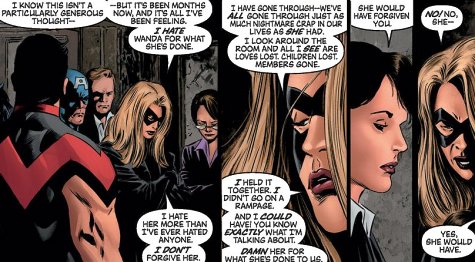 gathered, Carol was the most angry with Wanda and initially unwilling to forgive her for all the chaos and death she had caused. She could not see how Wanda could have given in to the pressures and tragedies of her life, when so many others, herself included, had persevered. But as the Avengers made a final toast to all those who had fallen while part of the team, Carol raised her glass and included Wanda as well. Surrounded by a crowd who had come to pay their respects, the Avengers officially disbanded for what they believed the final time. [Avengers Finale]