After all this, Carol needed a fresh start and relocated to Seattle to take a freelance writing gig with her old assistant editor from WOMAN magazine, Tracy Burke. She also pitched her sci-fi 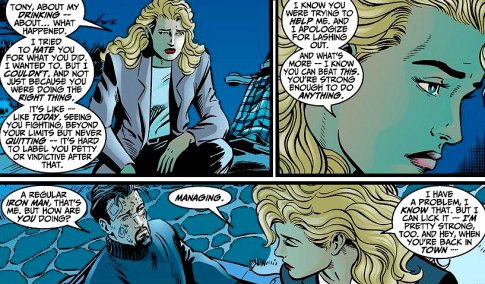 novel and found that Tracy was very enthusiastic about it. There, she ran into Tony Stark, who had also moved to Seattle recently. Carol accused him of following her and insisted that he keep his distance. However, when he was attacked by a new and malevolent War Machine armor, Warbird didn’t hesitate to fly to his rescue. During the course of the battle, Iron Man was gravely injured and Carol realized that she couldn’t stay mad at him. She finally admitted to Tony that her drinking had become a problem and took a tentative first step towards addressing the issue. [Iron Man (3rd series) #11-12] 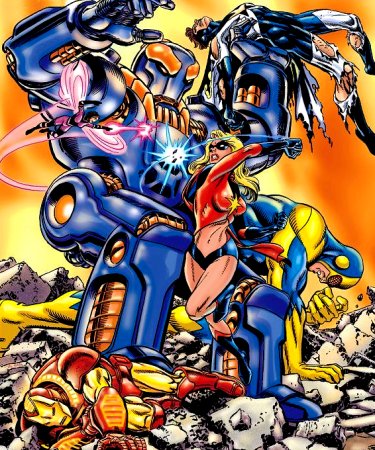 Warbird’s attempts to rebuild her life in Seattle were interrupted several times as she battled a variety of old foes. First, she was kidnapped by the Doomsday Man and Destructor: two old foes whose forms had been merged during a battle with Ms. Marvel. The conjoined villains were transformed by the same Kree Psyche-Magnitron device that created Ms. Marvel and they sought Carol’s body in the hopes of rectifying their condition. The Avengers were drawn into the fray and helped Warbird to defeat them. This was Carol’s first step towards reconciling with the Avengers, a group she still longed to be a part of. [Avengers (3rd series) #16-18]

A short time later, Warbird was captured by the Brood, who still had designs on her unique genetic make-up. The Brood staged a contest between Earth’s superhuman champions to determine who would serve as host to the next Brood Queen.  Rogue proved to be the victor and was then possessed by the Brood Imperiatrix. Warbird and 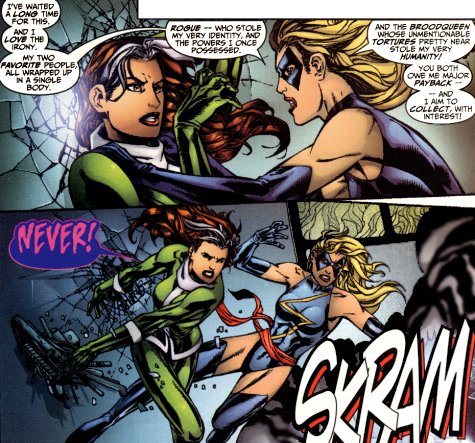 several other heroes escaped and opposed the Brood Queen’s plan. It came down to a final battle between Warbird and the Brood Queen who was inhabiting Rogue’s form. Warbird easily bested the Brood Queen and threatened to kill her. Realizing that Carol would not hesitate to do so, the Brood Queen abandoned Rogue’s body. Carol instinctively knew that Rogue was free of the Brood Queen’s influence and that the immediate threat posed by the Brood was over. Following this, Rogue and Warbird finally talked about all that had passed between them. While Carol admitted that she would never like Rogue, she had to give her credit for her heroic actions over the years and a measure of respect. After years of anger and animosity between the two women, Carol was finally ready to forgive. [Contest of Champions II #3, 5]

Rounding out this string of ancient adversaries was the reappearance of the armored aliens Goldenblade and Sapper, more foes from Carol’s days as Ms. Marvel. Carol found them raiding a naval vessel in Seattle and engaged them in battle while under the influence. Iron Man joined in and was alarmed to see that Carol’s drinking was proving to be a persistent problem. After making some serious tactical miscalculations, Carol was gravely wounded and Sapper and Goldenblade escaped. This affirmed that Carol had a problem that she was not able to handle on her own. After months of denial, she finally reached out to Iron Man for help. Tony urged Carol to join him at an Alcoholics Anonymous meeting but she was determined to overcome this on her own. [Iron Man (3rd series) #18-19]

Carol made progress over the next several weeks in staying sober on her own. However, when her publisher set a deadline for the outline of her second novel, the pressure got to be too much 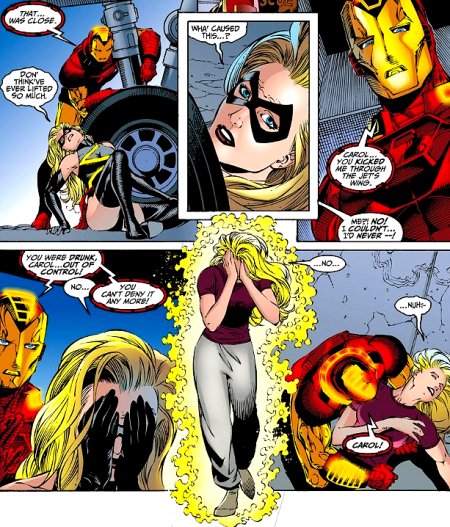 and she hit the bottle again. Tony found her drunk and tried to talk some sense into her. When an alert came in about another attack by Sapper and Goldenblade, Carol changed into her costume, downed her drink and was insistent on helping. Seeing no other way, Iron Man knocked Carol out and responded to the alert alone. When she awoke, she was enraged. Finishing her bottle, she flew to Stark’s Seattle home and attacked him. As they battled over the skies of Seattle, Warbird kicked Iron Man with her full strength, sending him hurtling through the wing of a commercial jet. Seeing Iron Man struggling to land the plane safely brought Warbird out of her drunken rage and she helped him to land it safely. She was shocked when he told her that it was her own actions that had caused the damage to begin with. Too weak to argue the point, Carol collapsed. [Iron Man (3rd series) #23-24]

Carol awoke in the hospital where she was being treated for advanced alcohol poisoning. Her doctor told her the extent that her excessive drinking had damaged her liver and other internal organs and warned her that, if she drank again, she’d die. Despite their recommendation that 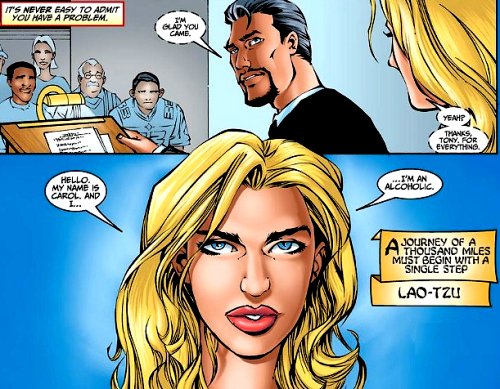 Carol be admitted to an extensive rehab program, she insisted on being discharged.  Carol made her way to a bar, convinced that she could stop at just one drink. She was stopped when she saw a news report that Iron Man was valiantly trying to stop the rampage of the giant robot called Ultimo in nearby Spokane. Transforming into Warbird, Carol found herself woozy until she absorbed some additional power from an exposed electrical line. This cleared her head and she remembered all that she had done the night before while drunk. Determined to make amends, Warbird helped Iron Man to defeat Ultimo. Having hit rock bottom, Carol finally admitted the severity of her addiction to alcohol and joined Tony at an AA meeting. [Iron Man (3rd series) #25] 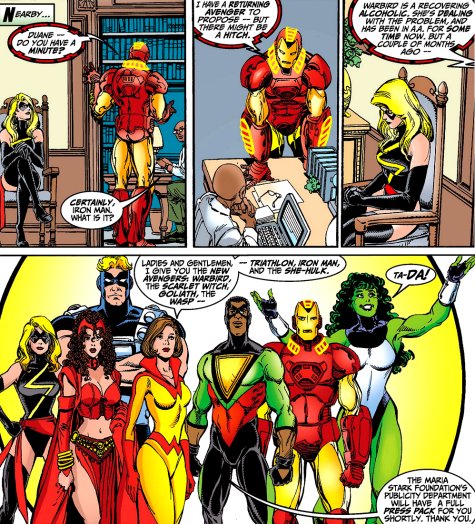 As part of her twelve-step program, Carol had to take responsibility for her actions while drinking and seek to make amends with those she had harmed. Several weeks after the incident, Carol turned herself in to the authorities, revealing her secret identity to the court and admitting her culpability in the downing of the commercial airliner. She was willing to accept the consequences of her actions, be that financial reparations or criminal charges. The court offered her a deal that included working off her sentence under the guidance of the Avengers. As a result, Warbird was reinstated to active status as a probationary member. [Avengers (3rd series) #26-27]

With her drinking days behind her, Carol was determined to prove herself worthy of membership among Earth’s mightiest heroes. Over the next several months, she showed herself to be a valuable asset to the team as they took on major heavyweights such as the sorcerous Kulan Gath, Magneto and Count Nefaria. Not only did Warbird prove to be a competent team player, she also showed that she was a capable squad leader and tactician. Carol became a core part of the team and reached out to new recruits like Triathlon and Silverclaw to smooth their transitions. Carol was also surprised when her teammate, the Vision asked her out on a date. While nothing romantic developed between the two, it did lead to a surprising new friendship for Carol. [Avengers (3rd series) #32]

When an intergalactic council deemed Earth a threat and tried to turn it into a penal colony for alien criminals, the Avengers stood front and center in opposing the action. Carol‘s experience with the Kree and other alien races made her a key player in the Avengers’ tactical planning. 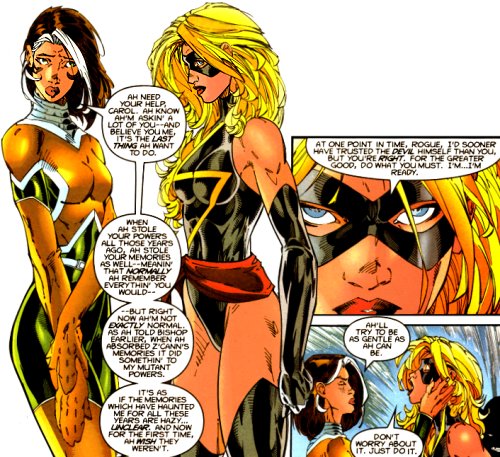 Warbird was among the Avengers who teamed with the X-Men in a frontal assault against Earth’s new warden, Ronan the Accuser. This teamed her once again with Rogue. Prior to the battle, Rogue had absorbed vital intel from a Skrull rebel, and this act had affected her other absorbed personas and memories. In order to access information in Ronan’s databases that were vital to defending the planet, Rogue needed a working knowledge of Kree operating systems. With no other choice and incredibly high stakes, Warbird willingly agreed to allow Rogue to absorb her powers and memories. This single act of trust proved to be another step toward mending the painful history between the two heroines. [Maximum Security #1-3, X-Men Unlimited (1st series) #29]