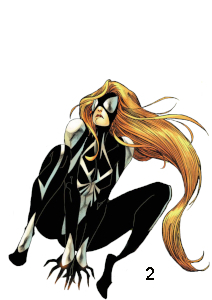 1) Julia's original and most recognizable costume is a blackish-blue bodysuit with white thigh-high leggings, long white gloves and a spider-emblem on the front and back of her chest and abdomen. To protect her secret identity, she also wore a matching mask that covered her eyes and forehead, with large white eyes. Originally, the tops of the white leggings and gloves were angled, but later were squared off. This is the costume that Julia wore for the longest, and also inspired Spider-Man's black spider costume. [Marvel Super-Heroes Secret Wars #7]

2) Upon relocating to Canada to join the heroic Omega Flight team, Julia started wearing a new costume. This costume was similar to her original in that it was a black one-piece with a large white spider design on her chest and abdomen and back, however she no longer had the white leggings and gloves. Instead, the various legs of the spider design stretched down the sides of her legs or across her upper arms. Round white spots were on her shoulders, hands and feet. She continued to wear a mask, this one black with large white eyes. Julia later gave this costume to Anya Corazon who became the new Spider-Girl. [Civil War: The Initiative #1 / Omega Flight #2]