Julia Carpenter was born Julia Cornwall, the only child of Elizabeth and Walter Cornwall, famous naturalist and conservationists who made a name for themselves promoting the pristine and untouched areas of the world. While her parents visited remote areas such in Africa, South American and Borneo, Julia grew up with nannies or more often was left to her own devices. Although she saw them mostly on National Geographic specials (the same as everyone else), Julia knew that they loved her, even if it was mostly from a distance.

As an undergrad attending college, Julia met Valerie Cooper, who was studying for her PhD, and the two struck up a friendship playing tennis together. Around the same time, Julia met Larry Carpenter and the two soon fell in love. Julia eventually dropped out of college to get a job so that she could help pay for Larry's way through college. During this time, they married and had a daughter named Rachel. Unfortunately, shortly after he got a job in public relations, Larry began to cheat on Julia. After five years of marriage, they divorced and Julia was awarded custody of their 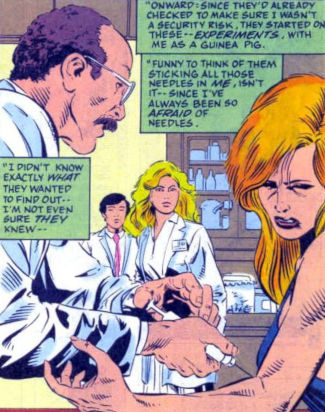 Julia was living in Denver when Val contacted her and invited her for lunch. When during their meal Julia revealed that she was looking for a better job, Val, who was now working for the Commission on Superhuman Activity, offered to fly Julia to Washington DC for a position. Even though Val wasn't able to tell her what the job was about, Julia was interested and convinced her ex-husband Larry to let her move east with Rachel. After she was cleared by the necessary powers-that-be, Julia was introduced to ta group of scientists led by a Dr. Napier, who subject her to a battery of experiments. Throughout the tests, Julia remained unsure what they were trying to test, and even began to suspect that the scientists themselves didn’t know either.

One of serums that Julia was given had apparently been contaminated with extracts from a venomous spider. Soon after receiving the injection, Julia discovered that she had gained incredible strength, agility and the ability to create psi-webs. This pleased Val and her scientists, but in truth the venom-laden serum had been no accident – Dr. Napier had purposely injected Julia with the tainted formula. Both Julia and Val noticed the similarity between Julia's newfound powers and those of the famous Spider-Man, so Julia became the second Spider-Woman, despite her preferring alternate code-names, such as Arachne or Ariadne. [Avengers West Coast #84, Spider-Woman (2nd series) #2]

As the new Spider-Woman, Julia performed a number of unchronicled assignments for the Commission. She enjoyed the heroic life she led and needed the money to look after her daughter. Still, she yearned for someone in whom she could confide and became troubled by the lack of time she had to spend with her daughter, who was looked after by an old woman called Mrs. Deacon when Julia was working. Even Julia's ex-husband knew something was up and he threatened to take custody of Rachel. [Peter Parker, the Spectacular Spider-Man (1st series) #125] 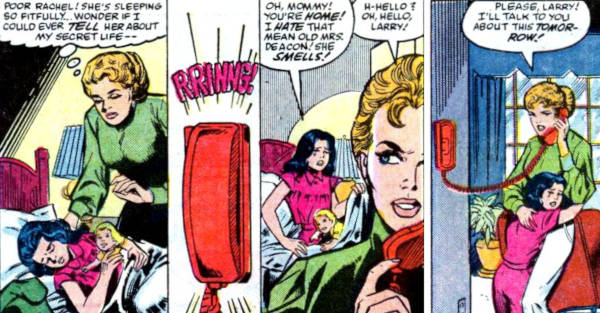 Julia was in Denver when an entire suburb she was it was suddenly transported by the cosmic being known as the Beyonder to Battleworld. On this alien planet, this new Spider-Woman made a 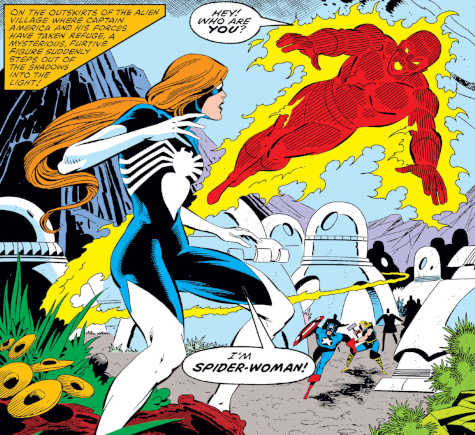 spectacular debut to many of Earth's super-heroes, who were currently engaged in a secret war against similarly kidnapped super villains. After demonstrating her abilities to the other heroes, Spider-Woman joined with them in the battle, earning their respect. During a conflict with a group of villains, Spider-Woman successfully defeated the Absorbing Man, villain who had held his own with Thor. Spider-Woman had also been noticed by Spider-Man. When the more veteran web-head believed he had come across a highly sophisticated, alien-constructed costume that responded to his thoughts, Spidey immediately realized his subconscious had been influenced by the new Spider-Woman’s costume, as his new costume’s appearance clearly mirrored the design of hers. [Marvel Super-Heroes Secret Wars #6-10]

Within a few days, it seemed the “secret war” was over when Doom used science and trickery to steal the massive power of the Beyonder for himself. With the conflict apparently over, the Molecule Man decided to return the suburb of Denver back to Earth himself, leaving behind the heroes, including Spider-Woman. Although Doom had stolen to powers of the Beyonder, the entity endured as a bodiless presence. After briefly possessing the Hulk, the Beyonder chose Spider-Woman, who remained unaware of its presence, other than a strange buzzing in her head. She was likewise unaware when the Beyonder abandoned her for Klaw, other than the buzzing having left her. Eventually, Doom’s ability to command the Beyonder’s power proved too limited and the Beyonder reclaimed his omnipotence and disappeared. With nothing left to keep them there, the heroes used the advanced technology left behind to return to Earth, Spider-Woman included. [Marvel Super-Heroes Secret Wars #11-12]

Upon returning to Earth, Julia was required by the Commission to move permanently to Washington DC, a decision to which her ex-husband didn't take kindly. Their relationship was further complicated due to her need to keep her identity a secret and thus being unable to reveal what her “job” was. Julia was soon placed into the Commission's only super-team – Freedom Force, which was comprised of mainly mutant, former criminals atoning for their villainous pasts. [Avengers West Coast #84, Spider-Woman (2nd series) #2]

For her first assignment with Freedom Force, Spider-Woman was sent to San Francisco to arrest the X-Men. Her powers enhanced by teammate Spiral, Spider-Woman used her psi-webs to restrain the X-Men, but nonetheless passed out from the effort. When she recovered, Spider-

Woman was noticed by Jessica Drew, both an ally of the X-Men and (by happenstance) the original Spider-Woman. Drew tried to find out about the mysterious new Spider-Woman and confronted her, though Spider-Woman didn't offer any clues to her identity or history. [Uncanny X-Men (1st series) #206]

Freedom Force's next assignment was to apprehend the absconded Navy seaman Rusty Collins, a young mutant whose power had manifested shortly after enlisting and who had gone AWOL afterward. Curiously, this mutant seemed to be associated with X-Factor, a self-described “mutant hunter” business run by humans. When Freedom Force located Rusty, he was among the mutant hunters in Central Park and Spider-Woman’s team found itself thwarted by not only X-Factor but locals who misunderstood what was going on. The conflict was almost ended by Spider-Woman when she caught Rusty in one of her psi-webs, only for the Morlock called Skids to use her frictionless force field to disrupt the psi-web, freeing her quarry. The situation grew more complicated by the arrival of X-Factor in their mutant “X-Terminator” identities and a battle ensured. Freedom Force pursued Rusty and Skids into the Morlock tunnels, where they thought to corner the two youths. Unfortunately, Mystique’s shapeshifting abilities tricked Spider-Woman into thinking she was attacking Rusty. Ultimately, the battle ended when Destiny warned them of impending danger in the tunnels. Believing her lover above all else, Mystique ordered the retreat. Val was less forgiving and issued a stern warning that no further failures would be tolerated. [X-Factor (1st series) #8-9, Morlock Massacre crossover]

Julia struggled with the heavy-handed tactics of Freedom Force and never formed any bonds with her former criminal teammates. Nevertheless, she stayed with them because she needed the money and, with the Commission watching her every move, she believed she didn't have much choice. When the team's next assignment turned out to be the capture of both branches of the Avengers, both of which had been accused of treason, Spider-Woman found herself questioning what she was doing even more. The rest of Freedom Force laughed at the Avengers, but Julia couldn't. She had fought alongside the Avengers on Battleworld and secretly wanted to be part of their team. Initially, Spider-Woman hung back during the battle but, when Spiral was watching her, she took out the Black Knight, ashamed of her actions. Mystique noticed Spider-Woman’s

hesitation and warned her to get back into battle. Spider-Woman attempted to pull her punches against Wonder Man, but was left with no option but to take him out.

Mystique warned Spider-Woman that they would discuss her actions afterwards. First, though, Freedom Force attended a mockery of a court where the Avengers sat trial, and Spider-Woman grew increasingly frustrated with what was going on. When Spider-Woman had her meeting with Mystique, she was warned that if she betrayed Freedom Force she would have dangerous enemies. Spider-Woman assured Mystique that she would be more focused, but secretly couldn't stand what was going on any longer. After breaking into Mystique’s office to learn of their location, Spider-Woman snuck into the Vault to break the Avengers out. Despite the Guardsmen being 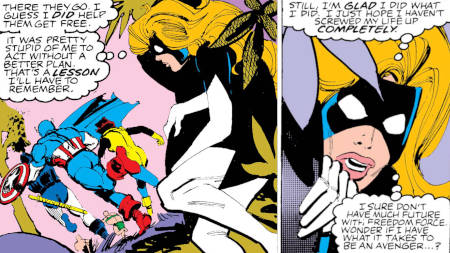 warned by Destiny of her arrival, Spider-Woman battled her way through the armored jailers and destroyed the machinery that controlled the Avengers’ cells. She then fled the facility and watched as the Avengers rushed past her shortly thereafter. She was pleased they escaped and wondered what would become of her now – and whether she had what it took to be an Avenger. [Avengers Annual (1st series) #15]

Given that her undoubtedly irate boss and friend Val Cooper knew her real identity and would have her family and friends under surveillance, Julia had nowhere to go but into hiding. As she knew the city best, Julia hid out in Denver and would check in on Rachel via telephone. On one such occasion, Larry grabbed the phone and warned Julia that he was starting proceedings to have custody of Rachel transferred to him. Julia begged him for more time, but couldn't discuss matters further as she witnessed trouble on a nearby construction site. In her civilian guise, she leapt towards the site and prevented two large steel beams from dropping onto civilians. This alerted local police to her presence and Julia fled from them. It was just outside of town where she was found by Iron Man. After thanking Spider-Woman for what she did to help the Avengers, he

passed on a message that Val Cooper was looking for her and that, if she turned herself in, a deal could be made. Spider-Woman asked Iron Man to help her and suggested that he could have it arranged for she and her daughter to disappear. Iron Man agreed, and left to look in on Spider-Woman's daughter.

While he was gone, Spider-Woman found herself under attack from s group of armored assailants called the Seekers. Iron Man returned in time to help Spider-Woman, but they were forced to let the Seekers escape. Spider-Woman and Iron Man retreated to an old shack, where Iron Man told Spider-Woman that, if he took Rachel and gave her to her, he would be condemning them both to a life as fugitives. He suspected that the Seekers might not be the last group to try to apprehend 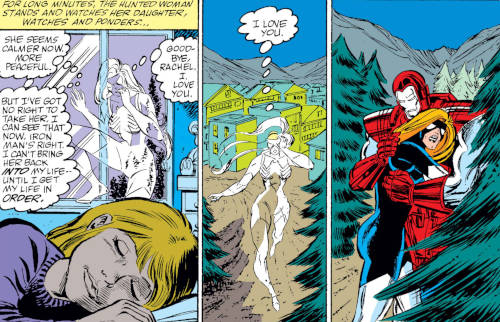 Spider-Woman, either. Opting to help her in another way, Iron Man gave her a device that could turn her invisible. Julia used this to sneak into Larry's apartment, where she intended to take back her daughter. Instead, after watching her sleeping daughter and Julia decided to leave her with Larry, believing it was best for her.